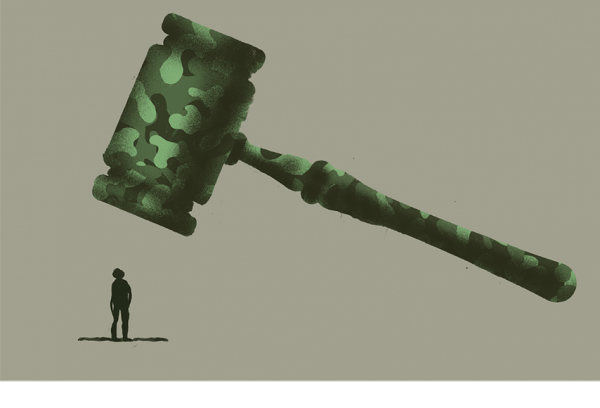 Beirut Lebanon – Civilians in Lebanon, including children, face trial in military courts, Human Rights Watch said in a report released today. Such trials do not respect due process rights and violate international law. In one prominent case scheduled for January 30, 2017, 14 people protesting the government’s inability to resolve a waste management crisis in 2015 face up to three years in prison.

The 37-page report, “‘It’s Not the Right Place for Us’: The Trial of Civilians by Military Courts in Lebanon,” documents the due process deficiencies inherent in trying civilians before military courts, the use of confessions extracted under torture, and allegations that Ministry of Defense or army officials have used the courts’ broad jurisdiction to intimidate individuals or retaliate against critical speech or activism. Children have also reported being tortured while awaiting prosecution in these courts.

Those who have stood trial at the military court describe incommunicado detention, interrogations without the presence of a lawyer, ill-treatment and torture, the use of confessions extracted under torture, decisions issued without an explanation, seemingly arbitrary sentences, and a limited ability to appeal. Civilians, and children in particular, should not be tried before military courts under any circumstances, Human Rights Watch said.

The structure of the military courts undermines the right to a fair trial, including the right to be tried before a competent, independent, and impartial court and the right to a public hearing, Human Rights Watch said. Many of the judges are military officers, appointed by the defense minister, who are not required to have a law degree or legal training. Military personnel serving as judges remain subordinate to the defense minister. Human rights organizations and journalists cannot monitor trials without the presiding judge’s prior approval.

The military court system is a separate judicial system situated within the Ministry of Defense. It has broad jurisdiction over civilians, including in cases involving espionage, treason, draft evasion, unlawful contact with the enemy (Israel), or weapons possession; crimes that harm the interest of military or security forces, or the general security; as well as any conflict between civilians and military or security personnel or their civilian employees. According to the Union for Protection of Juveniles in Lebanon, 355 children were tried before the military courts in 2016.

In recent years, the military prosecutor has brought charges against outspoken human rights lawyers and activists.

“It was the first time that I learned I could be treated this way,” said Tamara, one of the protestors facing trial before the courts on January 30. “We were in a protest, what did we do? I had no idea that I could end up in front of a military court.”

Human Rights Watch and Lebanese organizations have for years documented a pattern of torture by Lebanese military forces. Human Rights Watch documented eight cases in which civilians tried before the military courts on terrorism or security related offenses said they were tortured into confessing, and the coerced confessions were used as evidence against them in court. None had access to a lawyer or their families during interrogations.

Torture survivors described beatings, psychological torture, electric shocks, being hung by the wrists with hands tied behind the back, and orders to sign statements while blindfolded. In some of the cases, the coerced confession was the only evidence presented.

Lawyers who represent clients at the military courts and staff at Lebanese human rights organizations said that there is a higher incidence of torture in the military courts because interrogations are conducted by military personnel, the types of allegations involved – such as terrorism – increase the likelihood of torture, and the often incommunicado nature of pre-charge military detention.

In two of the cases documented, children said that military personnel extracted confessions from them through torture. One mother said: “I screamed from under the ground when I saw him…. I couldn’t believe this was my son. You can’t describe it. His face was all bloodied, swollen, and blue.”

On October 19, 2016, Lebanon’s parliament passed a law to establish a National Human Rights Institute, which will include a committee to investigate and monitor the use of torture and ill-treatment in places of detention. But Lebanon has still not passed legislation to criminalize all forms of torture as required by the Convention against Torture.

Of the 10 cases in which Human Rights Watch documented alleged torture during military interrogations, none of the accused said they were able to contact a lawyer before or during interrogation. In many cases, detainees said they were not allowed to speak with their relatives or a lawyer before they appeared in front of an investigative judge. Lawyers said that they often needed to use personal connections to locate clients in military detention.

Four Lebanese lawyers said that sentencing in the military courts is inconsistent and seemingly arbitrary, and that they have come to expect guilty sentences regardless of the evidence against their client.

According to Lebanese lawyers, there is only a limited right to appeal within the military court system, and the use of confessions extracted under torture in order to obtain a conviction is not considered grounds for appeal.

Under international law, governments are prohibited from using military courts to try civilians when civilian courts can still function.

The United Nations Human Rights Committee, the international expert body authorized to monitor compliance with the International Covenant on Civil and Political Rights, has expressed concern “about the broad scope of the jurisdiction of military courts in Lebanon” and their procedures. The UN Working Group on Arbitrary Detention has found that “military courts should not have jurisdiction to try civilians, whatever the charges they face.” Civil society organizations in Lebanon have long advocated for removing civilians from the jurisdiction of the military courts because of fair trial concerns.

Human Rights Watch sent letters detailing the findings to the Defense Ministry, Armed Forces, Military Police, Military Intelligence, and Military Court, and submitted a request to attend the January 30 trial. The Defense Ministry responded on January 5, 2017, writing that, “The military judiciary in all of its statutes respects all national and international rules of law, especially what concerns respect for human rights.” Human Rights Watch has not received a response to the request to attend the military court trial.

Lebanon should urgently remove civilians and children from the military courts’ jurisdiction, and ensure that judges deem inadmissible all confessions and evidence obtained under torture. It should expressly guarantee the right to a lawyer during interrogation and criminalize all forms of torture. Lebanon should also ensure that all judges are fully independent and impartial. The Defense Ministry should refer all torture allegations to the public prosecutor and ban all forms of torture and inhuman or degrading treatment.

“The Defense Ministry should immediately open up the military courts to public observers without prior permission,” Fakih said. “The least Lebanon can do is ensure that its citizens aren’t being sentenced in secret by a specialized court behind closed doors.”