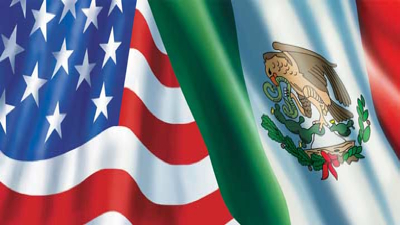 Top Mexican officials are expected to arrive in Washington for talks with senior officials in the Trump administration Wednesday — the same day the White House is announcing plans for building a wall on the border — hoping to turn the page after a period of tense relations.

Foreign Minister Luis Videgaray, who has led talks between the Mexican government and the Trump transition team, and Economy Minister Ildefonso Guajardo are approaching the meetings on trade, security and immigration with a similar negotiating strategy to the “America First” policy President Donald Trump reaffirmed Friday in his inauguration speech.

“We say Mexico first,” a senior Mexican diplomat told CNN on the eve of the two-day visit. “If they want to re-visit the relationship, then we say, yes. Let’s see what they want, what they bring to the table and how it can better benefit us.”

Another Mexican diplomat said, “We are coming to defend 25 years of unprecedented levels of cooperation. There is a lot of anger that we have become this punching bag and because of the lack of context in portraying Mexicans through one negative lens.”

They are also expected to meet John Kelly, the newly sworn-in Secretary of Homeland Security, as well as members of Trump’s economic team.

Mexican diplomats said the delegation comes prepared to remind the White House that Mexico has cards to play, too.

Most important among them is cooperation on deporting thousands of Central American immigrants before they reach the US. On the economic front, Mexico is the one of the largest trading partners to more than half of the American states.

“More than five million US jobs depend on selling things to Mexico,” said Earl Anthony Wayne, who served as US Ambassador to Mexico from 2011 to 2015. “If we want to track terrorists and others trying to get into the US, Mexico plays an important role. If we want to get better at criminal and drug organizations that operate in Mexico, they are critical. All of this needs to be done with deepening trust and cooperation.”

The delegation will be the first foreign dignitaries to visit Washington since Trump took office, after his fiery anti-Mexico campaign rhetoric and his pledges to renegotiate the North American Free Trade Agreement, deport undocumented immigrants from the US, and build a wall on the Mexican border.

Trump, who said earlier this month negotiations on the border wall would begin “immediately” upon taking office, is expected to take executive action Wednesday directing federal resources toward building it.

Peña Nieto said his government is prepared to negotiate with the US if Mexico’s national sovereignty is respected.
In a speech Monday, he laid out economic integration and respect for the rights of migrants and the money they send home as his nation’s key negotiating points.

Trump has suggested some of the $25 billion in annual remittances that migrants return home would be retained to pay for the border wall — a project Mexico opposes and which Pena Nieto has said Mexico would never pay for.
“Neither confrontation nor submission. Dialogue is the solution,” Peña Nieto said.

The White House said Trump has already spoken to both Peña Nieto and Canadian Prime Minister Justin Trudeau about his desire to renegotiate NAFTA and would be discussing the issue further when he meets with both leaders in the coming weeks. Trump has suggested negotiating bilateral trade deals with each of America’s neighbors.

“We are low-hanging fruit because we and Canada are probably the two countries that have the most at stake,” the Mexican official said. “But anyone who thinks they can walk back the integration we have achieved over the last 20 since NAFTA will pay a very heavy price.”

Steve Schwarzman, the CEO of Blackstone Group who is serving as an adviser to the Trump administration, told a group of Canadian officials recently that Canada had a “very special status” and “things should go well for Canada” in trade talks with the US.

“There could be no other option. Go for something that is less than what we already have? It would not make sense to stay,” Guajardo told Mexican television, “The strategy for this treaty needs to be one in which everyone wins. It’s impossible to sell it here at home if there aren’t clear benefits for Mexico.”

Videgaray, one of Pena Nieto’s most trusted advisers, was forced to resign as finance minister in September after arranging Trump’s visit during the campaign to Mexico City, which was widely viewed as a public relations disaster for Peña Nieto.

But earlier this month, Peña Nieto appointed him as foreign secretary to boost ties with the incoming Trump team. Videgaray has spoken several times to Kushner since Trump took office, describing him to aides as “articulate, pragmatic and a very good messenger” for the President.

“There is nobody the President trusts more,” one Mexican official said of Kushner. “He is someone who brings context, nuance and common sense to his father-in-law.”

This week’s talks are expected to lay the groundwork for Peña Nieto’s visit next week, which Mexican diplomats see as an important opportunity to get past the anti-Mexico rhetoric Trump used during the campaign and a chance to put the US-Mexico relationship back on track.

“There is … frustration with our government and ourselves that we have not been able to tell the story of this important relationship,” a Mexican diplomat said. “There are a lot of stereotypes of Mexicans in the US, but there are also stereotypes of Americans in Mexico. It is in the interest of both governments to explain what this relationship is and what we can do together.”

The diplomat said it is too early to say if US-Mexico ties have suffered long-term damage from the negative comments Trump made during the campaign. “A lot of this will depend on how Trump explains the value of our relationship,” he said.

Wayne, the former US ambassador to Mexico, agreed that Trump’s tone during Peña Nieto’s visit would be important to holding a constructive talks.

“There is growing popular pressure to standup up to this new tone of coming out of North America,” Wayne said.
He said Trump would do well to repeat his demeanor during his visit to Mexico City, where he was much more respectful than he was at other times during the campaign

“It didn’t change the substance, but it was done in a way of two partners talking to one another,” Wayne said.
CNN