#FreeMelania: Twitter sends out call to ‘save’ Trump’s wife 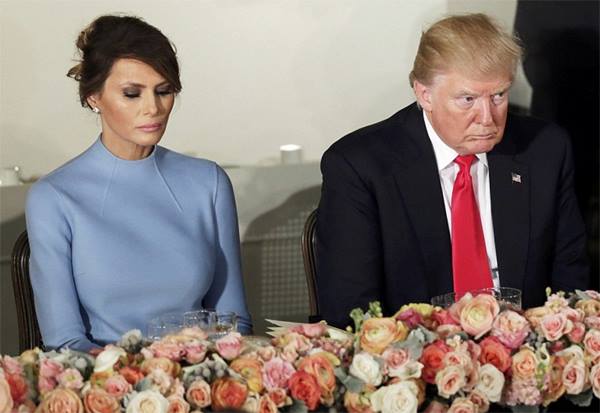 In the wake of a compromising video shot during the inauguration of Donald Trump, the Internet has sent out an ironic SOS to #FreeMelania.

The clip, which was filmed as Rev. Franklin Graham was delivering a blessing to the new president, shows Melania smiling brightly at her husband as he looks over his shoulder, and quickly dissolves into a scowl once his back is turned. It has sparked speculation that the first lady is unhappy in her role and has subsequently placed the Trumps’ relationship under the virtual microscope.

And the Oscar for Best Actress in a “Supporting Role”, goes to…#OscarNoms #FreeMelania pic.twitter.com/jXAFowa6zz

Naturally, Twitter users have been having a field day with the clip and other snapshots from inauguration day.

The interactions between the president and first lady were in stark contrast to those between Barack and Michelle Obama on inauguration day. While the outgoing first couple were caught in a few spontaneous tender moments and were generally seen smiling and laughing, the Trumps barely made any physical or eye contact.

Someone pay the goddam ransom fee for Melania. #FreeMelania

“They are a very different couple than the Obamas,” says Patti Wood, a body language expert and professional speaker. “Couples who are connected will lean up against each other, briefly touch or kiss, and offer helpful gestures, like when Barack took Melania’s gift from Michelle.”

“When [Donald] glanced back in the video, he wasn’t looking directly at Melania and didn’t make a connection. Her smile was up and energetic, but there wasn’t a warm connection that was broken. It looks more like she was hoping for a connection.”

Wood says there were several gestures that he made that indicated he doesn’t think they’re on the same plane as a couple. When they arrived at the White House to greet the Obamas, he walked up the stairs without waiting for Melania to exit the car. Similarly, during their inaugural dance, he pulled away from her.

“Those were all interesting choices,” she says. “He could have made small changes toward his wife to indicate that he honours her. Instead, he didn’t do anything to make her feel comfortable.”