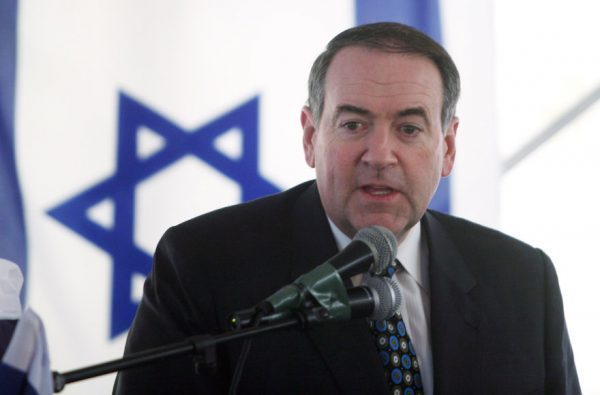 Huckabee was in Maale Adumim to lay the cornerstone for a new neighborhood in one of the largest Israeli settlements in the West Bank, just east of Jerusalem. The former Arkansas governor and strong supporter of Israel held a hat with the same catchphrase, and said he would bring one to Trump, whose campaign slogan “Make America Great Again” was the inspiration for the Maale Adumim banner.

Huckabee told CNN that he rejected the use of the word “settlements.”

Settlements have surged back onto the international agenda following the recent United Nations Security Council resolution condemning Israeli settlements in the West Bank and East Jerusalem as having “no legal validity” and being “a flagrant violation under international law.”

Days later, Secretary of State John Kerry addressed settlements in a speech as an obstacle to peace between Israelis and Palestinians.

Huckabee visited the settlements on the same day that Senate Republicans introduced a bill to recognize Jerusalem as the capital of Israel and move the embassy to Jerusalem.

Called the “Jerusalem Embassy and Recognition Act,” the bill requires the United States to act on a 1995 bill calling on the US to relocate the diplomatic mission. Since the bill’s passage, every president — both Republican and Democrat — has waived the requirement of the move, citing national security considerations.

“The only people who have ever had Yerushalayim as a capital have been the Jews,” said Huckabee, using the Hebrew name of the city. “Nobody else has ever made this city a capital, ever. So it shouldn’t even be controversial. Now it will be, but it shouldn’t be.”
An evangelical Christian, Huckabee is a frequent visitor to the settlements. Last summer, he visited Shiloh, a settlement north of Jerusalem in the West Bank, that is the Biblical site where the Ark of the Covenant rested before it was carried into Jerusalem.

Responding to Huckabee’s visit to Maale Adumim on Tuesday, PLO Secretary General Saeb Erekat said, “The expansion of the illegal settlement of Maale Adumim threatens to forcibly transfer more Palestinians in (East Jerusalem) to make a way for more Israeli settlements and settlers in Occupied Palestine.

“This is an attack against the international community’s will to achieve a just, lasting, comprehensive peace and an incentive for extremists to perpetuate conflict and blood in our region,” Erekat added.

Christian Zionism is a belief among some Christians that the return of the Jews to the Holy Land, and the establishment of the State of Israel in 1948, is in accordance with Biblical prophecy. The term began to be used in the mid-20th century, superseding Christian Restorationism.

Traditional Catholic thought did not consider Zionism in any form and Christian advocacy of the restoration of the Jews arose following the Protestant Reformation. A contemporary Israeli historian suggests that evangelical Christian Zionists of the 1840s “passed this notion on to Jewish circles”, while Jewish nationalism in the early 19th century was widely regarded by British Jews with hostility.
Some Christian Zionists believe that the gathering of the Jews in Israel is a prerequisite for the Second Coming of Jesus. The idea that Christians should actively support a Jewish return to the Land of Israel, along with the parallel idea that the Jews ought to be encouraged to become Christians, as a means of fulfilling a Biblical prophecy has been common in Protestant circles since the Reformation.

Christian Zionism has been around since the 1600s, when England’s deeply religious King James I was studying a book of bible commentary that suggested that the End of Days would take place in what was then Palestine. A pre-condition of the final battle of Armageddon, he read, was that 12,000 members of each of the twelve Hebrew tribes must return from the diaspora to Zion.

AIPAC, the Anti-Defamation League, and other institutional Jewish groups have chosen to embrace Christian Zionists, giving them legitimacy in Israel as well as in the United States.

Huckabee was one of the candidates president-elect Donald Trump was considering for the position of US ambassador to Israel. Huckabee has reportedly visited Israel more times than he can remember since age 17.

According to analysts the tragedy of this ill-conceived interfaith marriage is not that the love isn’t real—it’s real enough in its own way—but that one day, when the greater world fully understands the alliance between the Huckabee of the world and the Jewish community, it will no doubt turn traditional Christians against Jews, thus powering the very anti-Semitism they seek to avoid.

Trump decided to nominate bankruptcy attorney David Friedman as U.S. ambassador to Israel. Friedman, who has no prior diplomatic experience, is also an outspoken supporter of Jewish settlement on the Israeli-occupied West Bank and has questioned the need for a Palestinian state.