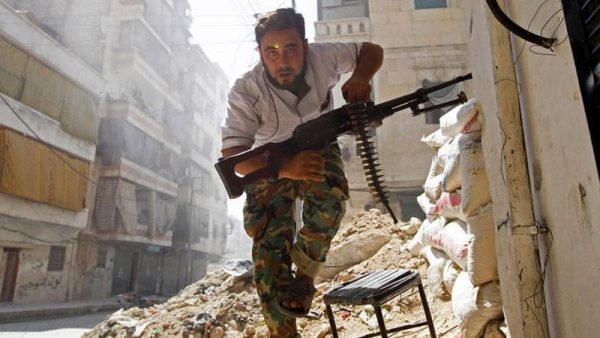 By Louisa Loveluck and Heba Habib

A Syrian cease-fire backed by Russia and Turkey is crumbling five days after it began, with government forces pushing offensives around Damascus and rebels threatening to suspend participation in new peace talks.

The truce was to have been followed by a meeting between government representatives and mainstream rebel factions in Astana, the capital of Kazakhstan.

But while fighting has largely ebbed in Syria’s north, where Turkey wields influence over most rebel groups, troops loyal to Syrian President Bashar al-Assad have continued strategic offensives in the Damascus suburbs.
In a statement published Monday, 10 rebel factions said they were suspending discussions regarding the Astana conference or the cease-fire “until it is fully implemented.” The groups cited “major and frequent violations” in the rebel-held areas of Wadi Barada and Eastern Ghouta outside the Syrian capital.

Government advances there are aimed at consolidating control of the Damascus suburbs, weeks after the army pushed rebels from the northern city of Aleppo.

In Wadi Barada, a river valley, an estimated 100,000 people have lived under siege since July, when Syrian and Lebanese Hezbollah troops cut access routes to a spring that provides 70 percent of Damascus residents with fresh water.

Speaking from the valley, resident Ahmed Hassan said his town was on the “brink of disaster.” He declined to identify the town for security reasons.

“Our water is running out, as is the medicine and the food,” he said. Fuel supplies are dwindling, he added, forcing families to huddle around fires as temperatures dip toward freezing.

Fighting also continues in the Damascus suburb of Eastern ­Ghouta. After its victory in Aleppo, recapturing the enclave would give the army and its Russian and Iran-backed allies virtually secure control over Syria’s two largest cities in less than a month, freeing up manpower for a final assault on what remains of the armed uprising in the northwest.

Most notably, the Syrian army said “terrorist” organizations would be excluded, implying that Jabhat Fatah al-Sham, an al-
Qaeda affiliate and an influential component of Syria’s armed opposition, would continue to be targeted.

And on Monday, it was. The Syrian Observatory said airstrikes by unidentified aircraft hit a building used by the group, killing at least 25 people and wounding dozens more.

But Western officials said privately that they feared the group’s exclusion from the cease-fire would be used as an excuse for pro-government forces to pursue strategic objectives elsewhere, as in Damascus this week.

The deal’s shaky progress also underscored the fact that no single player can fully deliver the government or the rebel side. While Russia has burnished its reputation as a mediator during talks with Turkey, it now appears unable to bring the Syrian government in line with the cease-fire.

Turkey has also struggled to bring the most important rebel factions on board. While two of the highest-profile Islamist groups, Ahrar al-Sham and Nour al-Din al-Zinki, have agreed to uphold the cease-fire, they have not signed any agreement to attend peace talks.

The U.N. Security Council offered tepid support for the Turkish and Russian initiative on Saturday, unanimously endorsing a resolution that encouraged a new cease-fire but stopping short of endorsing the official text put forward by Ankara and Moscow.