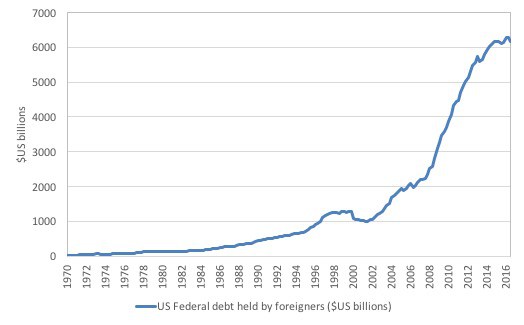 The biggest foreign buyers of U.S. government bonds are quickly retreating after years of absorbing record amounts of the securities.

This is an important dynamic to understand when looking at the potential fate of the $13.6 trillion Treasury market in 2017. It’s hard to see how these bonds can significantly rally, even in the face of bad news, given the exodus of foreign central banks from the U.S. government-debt market.

Major foreign holders of U.S. Treasuries have been reducing their inventories at an accelerating clip

Big foreign holders sold Treasuries in October at the fastest pace for a month since 2000. China has cut its holdings to the lowest since 2010, while Japan and Brazil have also steadily liquidated their stockpiles. 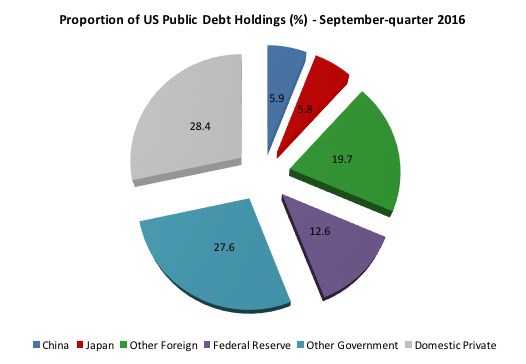 China has been selling its holdings of Treasuries at an accelerating clip as it supports its economy
And it’s not just the big governments that are selling. Private foreign investors have been net sellers recently, too, as Wells Fargo Securities rates strategist Boris Rjavinski pointed out in a recent report.
Checking Out
Most foreign selling of U.S. bonds has come from governments, but private investors have joined in

All this has helped fuel the biggest selloff in the notes since 2009. While many analysts have attributed the bond rout to the unexpected election of Donald Trump as U.S. president and subsequently higher growth and inflation expectations, the foreign flows complicate the picture.

For years, many countries were huge buyers of Treasuries as they built up their foreign-currency reserves. Many now need the money and are cashing out.

China, for example, is using tons of cash to support its depreciating yuan and bolster its financial system, which is showing signs of stress as the government seeks to curb riskier lending practices. Brazil’s economy is in shambles, meaning that nation needs all the free cash it can get to plug its budget gaps.

This foreign withdrawal will most likely continue for the foreseeable future, Rjavinski said.

That doesn’t mean the dip in Treasury values will accelerate drastically in the coming months. In fact, there’s a solid argument to be made that the latest selloff has gone too far and will correct soon enough.

I’ve argued that investors have gone too far with this idea that Trump will be able to quickly enact policies that will fuel just the right amount of inflation and growth to knock the economy out of its slow-growth rut. I stand by that.

But this backdrop of foreign selling is important. Yields on 10-year Treasuries may not quickly shoot up, but they most likely won’t plunge back to the lows of 1.36 percent seen in July. Those days of ultra-low U.S. yields seem to be over, regardless of whether Trump sticks to his promises and is able to carry out his policies in short order or not.
BLOOMBERG