Barack Obama’s impending departure from the White House has put many Americans in an elegiac mood.

Despite an average approval rating of only 48 percent — the lowest, surprisingly, of our last five presidents — he has always been beloved, if not revered, by the scribbling classes.

Just as many prematurely deemed Bush the worst president ever, so many are now ready to enshrine Obama as one of the all-time greats.

Or at least they were until the fall of Aleppo.

Since the Syrian uprising began in 2011, Americans have regarded the carnage there as essentially a humanitarian disaster. 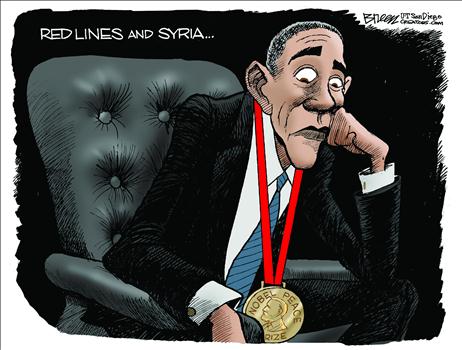 For Obama, contemplating his legacy, the awful death and destruction that Syria has suffered — the 400,000 deaths, the wholesale wasting of civilian neighborhoods, the wanton use of sarin gas and chlorine gas and barrel bombs, the untold atrocities — has raised the old question of how future generations will judge an American president’s passivity or ineffectuality in the face of mass slaughter.

Perhaps Obama has been hoping for a dispensation, since presidential reputations have never suffered much for such sins of omission. With a few notable exceptions, biographies, textbooks, obituaries, and even public memory have dwelled little on George W. Bush’s inaction in Darfur, Bill Clinton’s floundering over Rwanda, George H.W. Bush’s dithering about Bosnia, Jimmy Carter’s fecklessness in Cambodia, Gerald Ford’s cold realism toward East Timor, or Richard Nixon’s complicity in Bangladesh. “

Who, after all, speaks today of the annihilation of the Armenians?” Hitler reportedly said in 1939, predicting that the world’s amnesia about the Turks’ mass killings should allow his armies to proceed in all ruthlessness without fear of judgment. We might think of those words in considering how little attention in our history books is given to our presidents’ very limited roles in standing up to atrocities overseas. 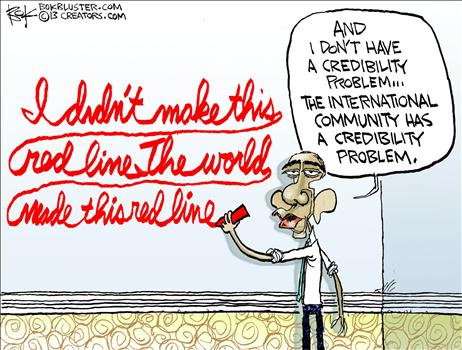 And yet now, as Obama’s presidency winds down, and a ceasefire begins to take effect Syria that Washington played no role in negotiating, it’s becoming clear that the loss of life and the humanitarian crisis represent just the first of many consequences that historians will have to assess as they ask how the United States, under Obama’s leadership, chose to deal, or not to deal, with the Syrian Civil War. And if historians tend to give presidents a pass on failing to arrest slaughter, they are not so generous in evaluating the loss of American influence around the world.

Right now, the apparent loss of that influence seems to loom newly large. The brutal Russian-backed assault in December crushed the Syrian resistance in its main holdout city, Aleppo, calling into question whether the rebel forces will still be able to carry on any insurrection at all.

President Bashar al-Assad is gathering with the despots of Russia, Turkey, and Iran to draw up the terms of resolution, pointedly excluding the United States and the United Nations. Vladimir Putin seems high in his saddle. 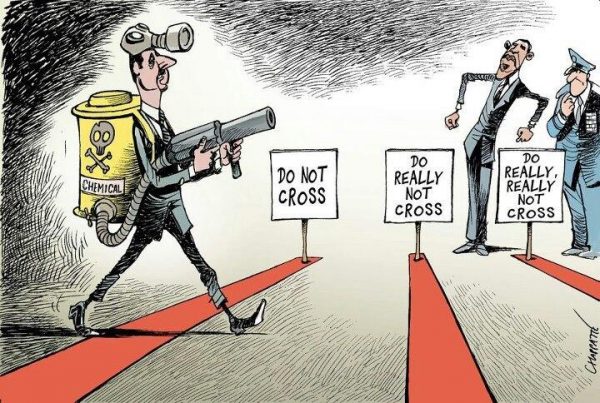 For years, Obama has insisted that Syria isn’t of great strategic importance to the United States. But that judgment represents not just a break from decades of geostrategic thinking but a gamble of considerable risk. If Obama is wrong, his miscalculation could have massive implications.Should Russia displace the United States as the region’s preeminent great power, it will affect America’s access to energy, its ability to fight terrorism, its capacity to ensure Israel’s survival, and its relationship with states like Turkey, Iran, and Saudi Arabia. 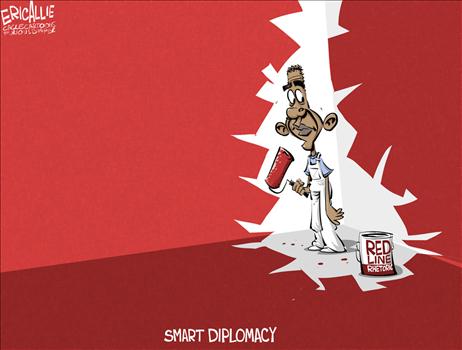 Equally important are the implications of Obama’s Syria policy on Europe’s immigration crisis. For decades the continent has struggled, with mixed results, to assimilate Muslim arrivals from the Middle East and Africa, many of whom come bearing sharply alien cultural values.

But the new waves of Syrian refugees unleashed by the failure to contain the civil war there has now created a crisis of unparalleled magnitude. Countries from Turkey and Hungary to Germany and France have been thrown into turmoil. Cultural tensions escalated, empowering right-wing nationalist parties across the continent and contributing to Britain’s vote to leave the European Union.

In the United States this past year, Donald Trump amplified his own pandering to anti-Mexican sentiment with new worries about an influx of Syrian refugees — stoking anti-immigrant fears. Around the world, it seems, the rise of noxious populist currents can be traced, at least in part, to the deepening of the immigration crises by the Syrian war.

Yet a third result of Obama’s ineffectuality lay in the rise of the Islamic State, a terrorist organization even more bloody-minded and bent on conquest than the al Qaeda fragments from which it sprang. Obama obviously did not create the Islamic State, contrary to Donald Trump’s absurd campaign-trail slanders. But his administration was laggard in countering its gathering strength.

Although the terrorist outfit is on the defensive now, it continues to orchestrate deadly strikes in Europe, and, indirectly, to inspire lone-wolf attacks in the United States, guaranteeing that terrorism will remain a major threat on both continents for years to come. 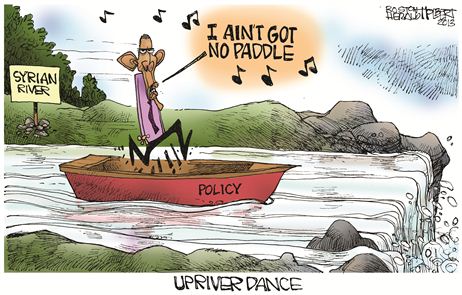 Fourth, the failure to contain the Islamic State early on also forced the United States to change its strategy in Syria. Turning his attention from Assad, Obama now chose to direct American military assistance mainly into the fight against the radical Islamist group. Among other effects, this reorientation of American policy made it much less likely — if not impossible — for Obama to deliver on his August 2011 vow that Assad must go.

Fifth and finally, it wasn’t only Assad who emerged emboldened. Fatefully, in 2012 Obama had declared that if Assad were to use chemical weapons, he would cross a red line that would require American military intervention.

A year later, evidence surfaced that Assad did precisely that, firing rockets filled with sarin gas at towns around Damascus.
But in the face of skeptical congressional opinion at home, Obama backed down from reprisals. Instead he settled for a Russian proposal that Syria merely dismantle its weapons stockpiles, but face no punishment for its war crimes.

Obama has made clear that he disdains the concept of “credibility” — the idea that the U.S. must follow through on its commitments lest it get pushed around in the future. But the reversal of policy in September 2013 on a clearly articulated principle sent shivers from Seoul to Jerusalem to Tallinn — and may well have encouraged America’s adversaries, including Russia, to test Obama further. 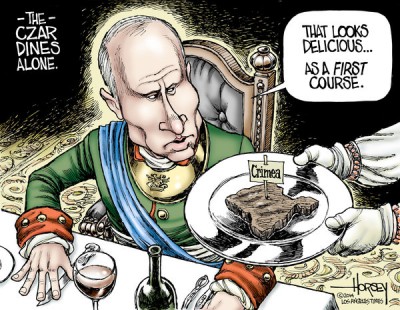 Putin’s illegal 2014 seizure of Crimea and the ongoing fomenting of unrest in eastern and southern Ukraine were worrisome enough. But now evidence suggests that the Russian president played a direct role in hacking Democratic Party officials’ emails in an effort to tip the scales of the presidential election in favor of Trump. These disclosures have shattered any claims that Obama showed sufficient resolve against a formidable, confident, and completely immoral rival for geopolitical influence.

Sadly, it seems probable that Obama won’t be judged too harshly for failing to arrest the carnage in Syria. For all our fretting, inaction in the face of genocide or mass slaughter or humanitarian disaster has never hurt our presidents much in the historical reckonings.

It is true that in the wake of the Holocaust, Americans grew conscious of the sufferings of foreign peoples and of their own responsibility, as citizens of the world’s mightiest nation, to try to do something. Looking at the past through this new lens, even the sainted Franklin D. Roosevelt took a mild hit, as historians learned more about and came to question his failure to assist the Jewish refugees of Europe, to bomb the rail lines to Auschwitz, or otherwise impede or retard Hitler’s killing machine. 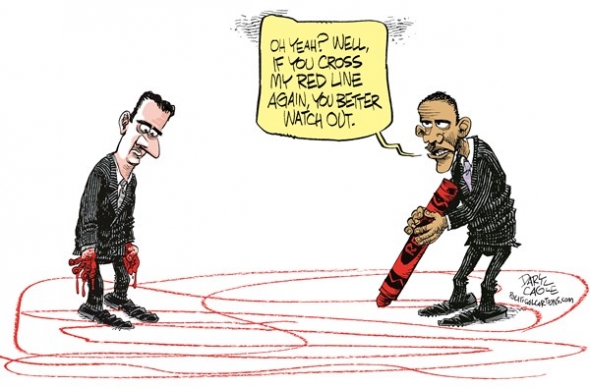 More recently, historians and journalists like Samantha Power, Ben Kiernan, and Gary J. Bass directed historians’ attention to other genocides and mass slaughters. Human rights advocates argued more vociferously that the world’s mightiest nations had a duty to try to prevent such atrocities.

But that consciousness peaked in the 1990s, and because military interventionism has fallen out of fashion since the Iraq War, it has been receding. Obama may have sought some solace in the fact that presidents’ reputations have not typically suffered for inaction in the face of mass slaughter.

They do suffer, however, for frittering away American power and prestige. Though Harry Truman wins high marks for his handling of the communist threat in Europe, he and the Democratic Party were haunted for years by the question, following Mao Zedong’s civil war victory in 1949, of “Who lost China?” — feeding a domestic political environment that arguably made his successors keener to intervene in Vietnam, Laos, and elsewhere in Southeast Asia.

Similarly, Jimmy Carter’s inability to deal effectively either with the Soviet Union’s 1979 invasion of Afghanistan or the revolutionary Iranian government’s seizure of 52 American hostages contributed to his defeat by Ronald Reagan in 1980 as well as to the low esteem in which his foreign policy is held by scholars. Presidents can’t, of course, always prevent the outbreak of conflicts and wars, but how they respond to those wars — and whether the U.S. emerges from them stronger or weaker, and the world safer or more precarious — is a telling measure of leadership.

On the other hand, as Obama knows well, presidents also suffer for wars gone badly. Lyndon Johnson should be remembered as one of America’s greatest presidents, but his stubborn prosecution of the Vietnam War, despite knowing it was unwinnable, has kept him out of the pantheon of greatness. (It’s possible that when the Vietnam-obsessed Baby Boomers pass from the scene, LBJ will be judged with greater balance and charity.)

George W. Bush’s invasion of Iraq, similarly, with all its disastrous implications, is likely to remain the central episode of his presidency for a long time, outranking even his more successful response to the terrorist attacks of 9/11.

Indeed, Obama, entering office after Bush’s ruinous adventurism, made the avoidance of another quagmire his primary goal. Encouraged by national security aides who hailed from the realm of domestic politics, Obama let the fear of crossing antiwar opinion dictate his path. Yet in treading lightly, Obama misplaced his big stick.

A conciliator by nature, he had reached the presidency on promises to unite inimical groups — red-staters and blue-staters, whites and blacks — and in his inaugural address he likewise pledged to bridge the gap with the Arab world. But just as he wasn’t prepared for the implacability of congressional Republicans, who scorned his outstretched hand in a bid to bolster their own power, so he did not count on foreign adversaries taking advantage of his aversion to conflict.

Obama’s Syria legacy won’t be the only factor shaping how posterity regards his foreign policy. The uneven efforts to wind down the Iraq and Afghanistan wars, the still-controversial Iran nuclear deal, the opening to Cuba, the weakening of al Qaeda and other terrorist groups, the struggles to revive peace talks between Israel and the Palestinians — these add up to a mixed and complicated record whose implications will take time and thought to untangle. It may be that his focus on building alliances in Asia will prove, despite the collapse of his Trans-Pacific Partnership, to be of greater long-term significance than his misadventures in Syria.

But for now it seems hard to escape the conclusion that in correcting for Bush’s overly aggressive foreign policy, Obama went too far in avoiding confrontations, and that in that halting and hesitant approach he wound up neither strengthening his country’s influence and status nor its power to bring about its ultimate goal of a safer and more peaceful world.
Business Insider