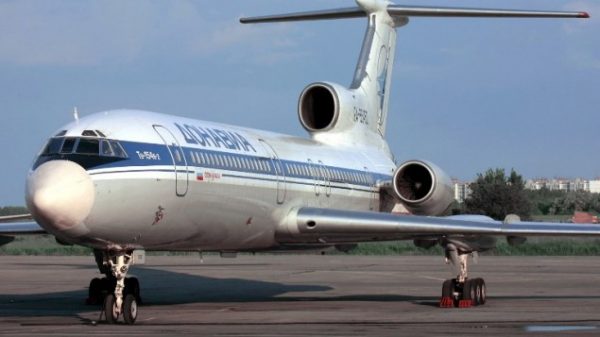 AFP PHOTO / RUSSIAN DEFENCE MINISTRY |This file photo taken on January 2, 2001 shows a Tupolev-154 (TU-154) aircraft. A Russian military plane crashed on December 25, 2016 in the Black Sea as it made its way to Syria with 92 people onboard
Share:

Russian television is mourning nine of its own – reporters and TV crew members from three different channels were on board the military plane that crashed early on Sunday en route to Syria.

Among those killed after take-off from Sochi were sound engineer Evgeny Tolstov and cameraman Oleg Pestov, who worked together.


A final photo of the aircraft was posted online by Tolstov. Showing the doomed aircraft on the tarmac in Moscow, where the flight originated, the image appeared on Facebook – with the caption “Travelling to Latakia”.

NTV cameraman Cyril Yanchenko, a colleague of award-winning Pestov, said: “I knew him for 15 years. Lately, we worked with the same equipment so I can say we looked at the world through the same camera lens. In recent years, if any turmoil happened somewhere, he was always there, always at the front line. He was a man who could not say ‘no’ – a man of the highest professional duty.”

Channel One correspondent Dmitry Runkov would have soon celebrated his 30th birthday.

The good news is that Vadim Ananiev, one of the choir’s lead singers, did not board the plane, as his wife just recently gave birth to their child. He briefly addressed the media yesterday afternoon: