Israeli opposition blasts Netanyahu after UN resolution.” This is not policy, this is hysteria” 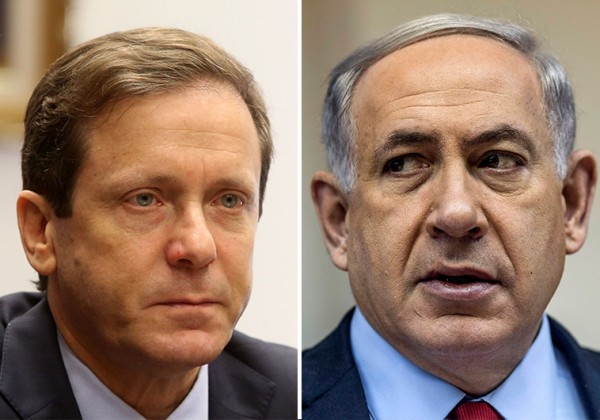 Prime Minister Benjamin Netanyahu’s domestic critics are coming out in force as the impact of the UN Security Council resolution condemning Israeli settlements begins to sink in.

After focusing initially on condemning what most Israeli politicians considered a hostile attack, the opposition on Monday blamed Netanyahu for harming the country’s standing and criticized his response to Resolution 2334.

“The prime minister was bragging about our foreign relations, and now what’s underway is a total collapse of Israeli foreign policy,” Yitzhak Herzog, co-chair of Israel’s largest opposition party, said at the opening of the Zionist Union faction Monday. He called on Yair Lapid, head of the opposition party Yesh Atid, and Finance Minister Moshe Kahlon, whose Kulanu party is part of the governing coalition, to join him and “stop Netanyahu before it’s too late.”

Israel on Sunday summoned representatives from Security Council members and ordered the Foreign Ministry to reduce work ties with countries that voted for Resolution 2334, which demands that Israel cease construction in all areas it captured in the 1967 Middle East war and describes the West Bank and East Jerusalem as occupied Palestinian territory. A day earlier, Netanyahu recalled Israel’s ambassadors from New Zealand and Senegal, two of the resolution’s four co-sponsors, ended aid programs to Senegal and pledged to cut off 30 million shekels ($7.9 million) in Israeli funding to UN institutions.

“This is not policy, this is hysteria,” Yesh Atid’s Lapid said at a party meeting Monday. “We have enough haters who want to isolate us, there’s no reason to isolate ourselves.”

In the days after the vote Netanyahu lashed out at U.S. President Barack Obama, with whom he has had a testy relationship, saying his administration pushed the resolution behind the scenes and had broken a long-standing commitment not to allow the UN to impose conditions on Israel in its conflict with the Palestinians. The U.S. decision to abstain in the vote, rather than veto the resolution, allowed it to pass.

Now concerns have shifted to the possibility that the resolution won’t be Obama’s last foray into the region. According to the Israeli newspaper Haaretz, the government fears a Jan. 15 conference of foreign ministers in Paris will draft parameters for resolving the conflict with the Palestinians in a way that Israel considers unfavorable, and will seek to impose them through the Security Council before Obama leaves office Jan. 20.

Defense Minister Avigdor Liberman on Monday compared the Paris conference to an infamous 1894 trial in which a French Jewish army officer was imprisoned for treason after a trial considered a landmark example of anti-Semitism.

“What they’re preparing there in Paris is a modern version of the Dreyfus Affair,” Liberman said at a meeting of his parliamentary faction Monday. “With one difference — this time, the whole people of Israel and the whole State of Israel will be in the guilty dock.”

The U.S. abstention highlighted the increasingly strained ties between Obama and Netanyahu. The Security Council vote came in the waning weeks of Obama’s presidency, as Israel looks forward to warmer relations with President-elect Donald Trump, who had pressured Obama to veto the resolution in an unusual breach of transition protocol.

Obama was highly critical of Israel’s West Bank settlements from the moment he entered office. The two leaders then clashed publicly over the 2015 Iran nuclear deal, with Netanyahu denouncing it in a speech to Congress that wasn’t coordinated with the White House and that soured relations further.

The Obama administration has denied Friday’s vote breached any U.S. commitments to Israel, saying it’s in keeping with U.S. support for a two-state solution to the Israeli-Palestinian conflict.

Palestinian leaders welcomed the measure’s passage. The office of Palestinian Authority President Mahmoud Abbas said the move is “a big blow” for Israeli policy and a unanimous international backing for the two-state solution. Hamas, which rules the Gaza Strip, and Palestinian Islamic Jihad also praised the vote.

Under terms of the agreements that have directed Israeli-Palestinian peace efforts for more than two decades, borders and settlements are issues for the two sides to negotiate in a final peace deal. Israel says the UN vote will convince Palestinians they can get what they want without having to negotiate, making them more intransigent. Palestinian leaders, on the other hand, blame Israel for the collapse of previous peace talks.