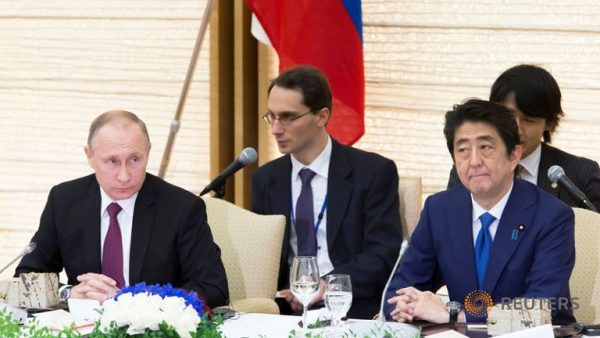 But in the end, the talks between the officials yielded little other than details of business deals that had already been announced and a commitment to continue discussions about economic cooperation on four islands that both countries claim. The dispute over what Russia calls the southern Kurile Islands and Japan calls the Northern Territories has prevented Japan and Russia from signing a peace treaty ending World War II.

“We should not be bound by past negotiations,” Mr. Abe said at a joint news conference in Tokyo on Friday at which he repeatedly referred to Mr. Putin by his first name, striking an unusual note in formal Japan. “It is necessary to draw a new blueprint for the four northern islands in which Japanese and Russian people can live together and build a win-win relationship.”

Mr. Putin talked mostly of broader economic initiatives between the countries, including an investment fund for projects in Russia of 100 billion yen, about $845 million, set up by the Russian Direct Investment Fund and the Japan Bank for International Cooperation, which is controlled by the Japanese government.

The unsigned peace treaty, Mr. Putin said, “is a negative legacy from the past.” With Mr. Abe’s proposals for joint economic development on the four islands, he said, “we were able to deepen our mutual trust before we sign a peace treaty.”

Mr. Abe decided to meet with Mr. Putin this week despite opposition from the Obama administration, which has criticized Russia for its annexation of Crimea in 2014 and its backing of the Syrian government under President Bashar al-Assad in the current civil war. The United States government is also investigating the role of Russian hackers in online breaches of the Democratic National Committee during the presidential campaign.

Mr. Putin, responding to a reporter’s question at the news conference on Friday, described the Syrian war as “a sign that talks between Syria, Russia and the international community are not proceeding well.” He said that the Syrian Army was “trying to secure the safety of the people of Aleppo,” the site of months of fierce bombardments, and that Russia wanted to help broker a cease-fire.

Before Mr. Putin’s visit, Mr. Abe and others in Japan had suggested that the talks might provide a breakthrough in negotiations over the disputed islands, which have been conducted on and off since 1956, when both sides reached a preliminary agreement for the return of two of the islands.

Japan traces its claims to the 17th century, but the Russians generally date their sovereignty to the waning days of World War II, when Soviet troops occupied the islands after Japan’s surrender in 1945. But in response to a question from a Japanese reporter on Friday, Mr. Putin appeared to suggest that Russia’s claim dated to before the 1904-5 Russo-Japanese War.

Some commentators in Japan said that Mr. Abe had made progress just by keeping the talks going.

“If we take the Yamaguchi meeting as one important step toward realizing the potential strengthening of bilateral relations, I think Abe and Putin achieved that purpose,” said Kazuhiko Togo, a former Japanese diplomat who teaches international politics at Kyoto Sangyo University.

While Japan has long sought the return of the islands, it is also eager to strengthen ties with Russia to counter China’s rise. After the talks, the countries concluded a series of agreements to pursue economic cooperation in health care, energy, agriculture, fisheries and other projects in Russia.

But Mr. Abe said the leaders had also discussed joint economic activities on the four disputed islands themselves. For the Japanese, the most delicate part of such talks would be to establish a framework that does not recognize Russia’s claim.

“Getting the four islands back was a Cold War slogan for the Japanese,” said Nobuo Shimotomai, a specialist in Russian-Japanese relations at Hosei University in Tokyo. “But after 60 years, we need a new approach towards Moscow. It could be some kind of shared sovereignty.”

Others saw the talks as a setback for Japan.

“I think this has not been good at all for Japan,” said James D.J. Brown, associate professor of political science at Temple University in Tokyo. “Some of those economic deals will be beneficial to both sides, but on the crucial territorial issue, there is nothing here.”

Mr. Brown said he expected the talks on joint economic development on the disputed islands to founder on legal disagreements.

“Putin’s statements show that on issues of historical memory, Russia is not willing to move,” he said. “For them, these islands are theirs by right, and they seem very unlikely to compromise on them.”

The optics of Mr. Putin’s visit also seemed unfavorable to Japan. In a country that prizes punctuality, several commentators viewed Mr. Putin’s tardy arrival as intentional. A week before the visit, a Japanese legislator tried to send a male Akita dog to Mr. Putin, to join the female dog that he had received four years ago. The Russian government rejected the gift.

On the website of Weekly Gendai, a newsmagazine, a headline called the talks a “miserable result for the Northern Territories negotiations,” adding, “Abe was taken advantage of by Putin.”