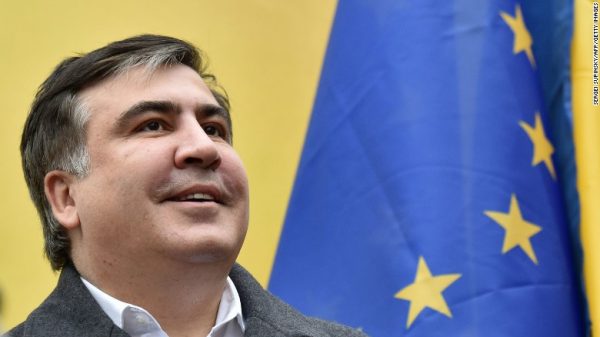 Former Georgian president Mikheil Saakashvili in Kiev on November 27, 2016. He told CNN” “The Kremlin ultimately and Putin especially, think that the United States need to be defeated.”
Share:
In several former Soviet republics, top security officials and even a former president are saying “I told you so” amid allegations of possible Russian hacking targeting the US presidential election campaign.

“Some things you discovered now as new in your pre-election campaign we’ve been seeing it already for years,” Janis Garisons, Secretary of State in Latvia’s Defense Ministry, told CNN.

Latvian government agencies come under frequent cyber attacks and other forms of hsybrid warfare that he believes originate from Russia, he said.

“In 2012, they (Russia) were heavily involved in Georgian elections. They’ve done cyber attacks over different time periods. They’ve done all kinds of media provocations.They’ve spread rumors. They’ve sent operatives to do all kinds of dirty tricks. And back then my friends from the US Embassy were saying ‘you’re over-reacting,'” added Saakashvili, who served two consecutive terms as president in Georgia before stepping down in 2013.

“I almost was vindicated when the same administration in Washington suddenly started to speak about Russian involvement in the election,” Saakashvili said.

Moscow has denied any involvement in alleged hacking targeting the US election.
On Friday, Russian President Vladimir Putin’s spokesman Dmitry Peskov said it is “indecent” of the US to “groundlessly” accuse Russia of intervention in its elections, previously officials have accused the Obama administration of scape-goating Russia to cover for Hillary Clinton’s defeat.

Ukraine, which has been embroiled in a deadly two-year war against separatists backed by neighboring Russia, announced on Friday that several of its government agencies have recently been the target of ten major cyber attacks.

“They were able to overcome the consequences,” she added.

“We perceive this attacks on the web-site as part of attacks on the government resources, that have become stronger over the last week,” the statement read, adding that news would be published on the ministry’s Facebook page until the site was fully restored.

Last December, a separate cyber attack on a Ukrainian power company succeeded in completely blacking out more than one hundred cities and partially depriving electricity to at least 186 other cities.

They concluded that the virus that targeted the electric company came from an infected Microsoft Word document believed to be of Russian origin.

Ukraine, Latvia and Georgia all have historically tense relationships with the Kremlin.

All three countries were ruled by Moscow for a half century or more when they were part of the Soviet Union.

Top officials in these countries accuse the present-day Russian government of continuing to try to dominate these former Soviet states.

Russia’s so-called hybrid warfare strategies are rooted in Soviet intelligence tactics that were developed in the 1970s and 1980s, said Janis Sarts, director of the NATO Strategic Communications Centre of Excellence in Riga, which studies Russia’s communications strategies.

“They use in a coordinated, coherent manner the traditional media, social media and also non-governmental actors and influence agents to achieve a desired effect on the audience,” Sarts said.

The centre published a report on the sudden shift that Russian state media, followed by pro-Russian blogs and Internet trolls, made when Russia launched its surprise military intervention into Syria this year.

“In two weeks time, all the discussion was about these “Nazi” Ukrainians and their horrible crimes, and then there was a 180% turn … to talking about Syria,” Sarts said.

“The Kremlin ultimately and Putin especially, think that the United States need to be defeated.” Mikheil Saakashvili

Seated next to a bust of US president Ronald Reagan in Ukraine’s capital Kiev, Saakashvili, who famously took his country to war against Russia and lost in 2008, outlined his view of Putin’s endgame.

“The Kremlin ultimately and Putin especially, think that the United States need to be defeated,” he told CNN.
“That’s what Putin sees as the endgame for himself.”

“The destruction of NATO as an organization and the weakening of the United States and its severing from Europe.”