Israeli PM warns Iran: “Don’t threaten us. We are not a rabbit, we are a tiger” 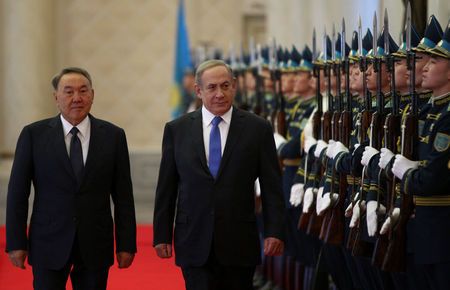 JERUSALEM (Reuters) – The fall of Aleppo to Syrian government forces backed by Russia and Iran has heightened alarm in Israel about potential threats to its borders and a wider reshaping of the region.

Prime Minister Benjamin Netanyahu left no doubt on Wednesday about the depth of Israel’s concern about Tehran, whose position and that of its proxies in Syria has been strengthened by the crushing of rebel resistance in Aleppo.

At a meeting in Astana with Kazakh President Nursultan Nazarbayev, Netanyahu was asked whether he had a message for Iranian President Hassan Rouhani, who is scheduled to visit Kazakhstan next week.

“Don’t threaten us. We are not a rabbit, we are a tiger,” the Jerusalem Post newspaper quoted Netanyahu as telling Nazarbayev. “If you threaten us, you endanger yourself.”

Asked by Nazarbayev if he seriously believed Iran wanted to destroy Israel, Netanyahu replied: “Yes, I do.”

The more than five-year-old civil war in Syria has enabled Iran, whose Supreme leader has called for an end to the Jewish state, to steadily increase its influence across the region.

Whether via its own Revolutionary Guard forces or Shi’ite Muslim proxies, especially Lebanon’s Hezbollah militia, Tehran’s reach extends from Afghanistan to the Mediterranean Sea.

As well as concerns about an increased flow of arms now Iran has access to a port on the Mediterranean at Tartus, on the southern Syrian coast, Israel worries Hezbollah, emboldened by Iran’s patronage, may launch new attacks on its territory.

There have been isolated border incidents in recent months, and Israel and Hezbollah fought a war in 2006 in which more than 1,000 Lebanese and 160 Israelis were killed. Large populations in Israel and Lebanon were displaced and major infrastructure in southern Lebanon and parts of Beirut was destroyed.

While Hezbollah’s ranks have suffered in the fighting in Syria — Israeli officials estimate 1,700 fighters have been killed and 7,000 wounded — the group has restocked its weaponry and retains an arsenal of at least 100,000 rockets, Israeli and independent analysts say.

In recent weeks, unclaimed airstrikes have targeted southern Syria and near Damascus. Syria has pointed the finger at Israel, which has made no comment. But Defence Minister Avigdor Lieberman said last week Israel was working “to prevent the smuggling of sophisticated weapons, military equipment and weapons of mass destruction from Syria to Hezbollah.”

Avi Dichter, the chair of Israel’s foreign affairs and defence committee and the former head of the Shin Bet intelligence agency, said Iran had tried several times in the past to move forces into the Syrian Golan Heights, next to territory that Israel captured in the 1967 Middle East war.

Those moves were repelled, Dichter told Reuters. But he said that, with Iran flush with cash and confidence after last year’s agreement restricting Iran’s nuclear program, it was possible further attempts would be made to test Israel’s responses.

“Iran has a strategic plan,” he said. “It might bring Iranian troops closer to Israel, either Revolutionary Guards, who are pure Iranians, or others, like Hezbollah or the Basij militia, which might be a very good cover for them.”

Beyond the threat from Iran and its proxies, Dichter has warned that Israel, widely thought to be the only nuclear capable state in the Middle East despite maintaining a policy of ambiguity, must not put too much confidence in Russia. The Israeli government sees Moscow as an ally but Dichter says it could shift position if its interests are threatened.

Dichter believes Russia has long-term aspirations in the Middle East which could bring fundamental changes to the borders of the region, depending largely on how incoming U.S. President Donald Trump and Russian President Vladimir Putin interact.

“Those two leaders might not just think but act in order to create what we call a new Middle East,” Dichter said.

He called Russia the “supreme decider” in Syria but made clear the immediate concerns were Iran and Hezbollah.

“We have no intention to allow Hezbollah to test their sophisticated weapons because there are no other targets in the Middle East except Israel when Hezbollah and Iran think about an offensive initiative,” said Dichter. “By all means Israel is going to stop it, never mind whether by alerts or activities or any other tools.”