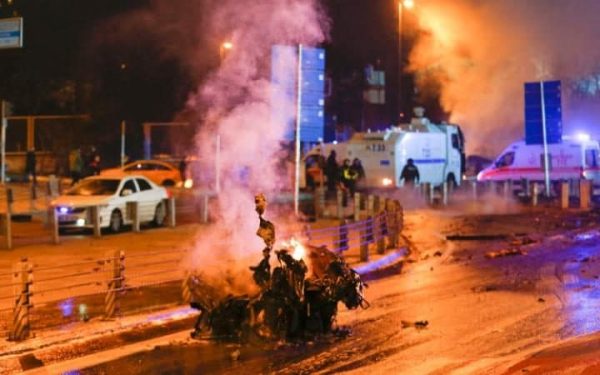 Police arrive at the site of an explosion in central Istanbul CREDIT: REUTERS
Share:

By TIM ARANGO
Two explosions were heard in central Istanbul on Saturday night, and officials said one of them was a car bomb outside a stadium that targeted police officers on duty for a soccer game.

Mr. Soylu, speaking from Ankara in comments carried by local media, said the second explosion appeared to be in a nearby park, and may have been a suicide bomb.

The explosions set off activity around central Istanbul, with rushing ambulances, helicopters hovering, and a large plume of smoke rising over the city, scenes that were as familiar as they were frantic. Like last summer’s attempted coup and a devastating attack at Ataturk Airport in Istanbul, the bombs on Saturday came in the late evening, when this megacity’s streets, bars and restaurants were packed.

Once the news ricocheted around town, revelers hurried home, glued to their mobile phones, amid the sound of sirens. Those closer to the stadium heard screams and the sounds of gunfire.

“I heard a large explosion and immediately turned around and then there was a second explosion,” said Sheri Cavazos, an Istanbul resident who was at a nearby hotel. “I immediately thought it was a terrorist attack. I wasn’t surprised. I was expecting it.”

But within a couple of hours it seemed clear that a major attack against civilians had not transpired. The bombings occurred after the game was over and most fans had left the area around the stadium. Local media reported that the attack targeted a riot police bus, not a gathering of civilians.

Turkey faces numerous security threats, including the Islamic State, which Turkey is fighting in Syria and Iraq as part of an American-led coalition against the terrorist group, and Kurdish militants who are at war with the Turkish state in the southeast. No group immediately took credit for the attack, although the choice of target — the police, rather than civilians — was in line with the types of attacks that have been carried out by Kurdish militants.

Over the last four years, Turkey has evolved from a country of stability and prosperity that was trying to lead the Middle East at a time of great turmoil to one that is increasingly consumed by violence and political problems within its own borders.

Istanbul, a city of 14 million residents that has thrummed with tourists in recent years, has become a frequent target, with attacks over the last year in the old city and on Istiklal Avenue, the most famous street. Tourism has collapsed, businesses have fled the city center to go to the suburbs, and many trendy restaurants and shops have closed.

“This is the new norm now,” said Ozan Tas, a taxi driver who was working near the stadium. “Us taxi drivers are no different than ambulance drivers. We are constantly working to get people to safety. There hasn’t been an attack for awhile. We were expecting this.”

In an address early Sunday, the minister said 10 people had been arrested in connection with the attacks.