McCain: Tillerson’s relationship with the thug, bully, murderer Putin a ‘matter of concern’ 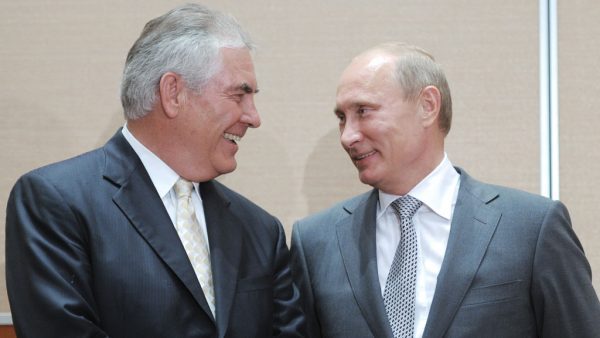 Sen. John McCain expressed concern over the relationship between ExxonMobil chief Rex Tillerson (L) , who is President-elect Donald Trump’s leading candidate for secretary of state, and Russian President Vladimir Putin whom he branded as is a thug, a bully and a murderer
Share:

Sen. John McCain said Saturday that the relationship between Rex Tillerson, President-elect Donald Trump’s leading candidate for secretary of state, and Russian President Vladimir Putin is a “matter of concern” to him.

In an interview with Fox News, the former GOP nominee and chairman of the Senate armed services committee said, “I don’t know what Mr. Tillerson’s relationship with Vladimir Putin was, but I’ll tell you it is a matter of concern to me. You want to give the president of the United States the benefit of the doubt because the people have spoken. But Vladimir Putin is a thug, a bully and a murderer, and anybody else who describes him as anything else is lying.”

Tillerson, the president and CEO of ExxonMobil, is the leading candidate to be the next secretary of state, POLITICO reported Friday. Tillerson managed the relationship between the company and the Kremlin as an Exxon executive. He struck a deal that allowed ExxonMobil to access Arctic resources in Russia in 2011.

Trump described Tillerson as “much more than a business executive,” in an interview clip with Fox News Sunday’s Chris Wallace released Saturday. The full interview will air Sunday afternoon.

“Well in his case he’s much more than a business executive, I mean he’s a world class player. He’s in charge of I guess the largest company in the world,” Trump said of Tillerson. “He’s in charge of an oil company that’s pretty much double the size of his next nearest competitor. It’s been a company that’s been unbelievably managed. And to me a great advantage is he knows many players, and he knows them well. He does massive deals in Russia. He does massive deals , for the company, not for himself, for the company.”

McCain, however, told CNN that he will wait to hear Tillerson’s answers in regards to his ties to Putin in a would-be hearing to make his final decision.

“What about all the other things — right now, the targeting of hospitals by Russian aircraft with precision weapons in Syria, in Aleppo?” McCain said. “Those are the kind of questions that we need to ask about the relationship with Vladimir Putin.”
POLITICO