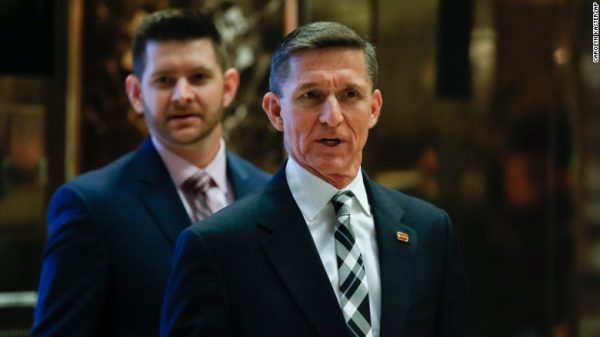 Michael G. Flynn, jr. (L) the son of retired Lt. Gen. Michael T. Flynn,(R) who has has served as his father’s top aide and chief of staff in the transition has been fired for spreading fake news
Share:
President-elect Donald J. Trump on Tuesday fired one of his transition team’s staff members, Michael G. Flynn, the son of Mr. Trump’s choice for national security adviser, for using Twitter to spread a fake news story about Hillary Clinton that led to an armed confrontation in a pizza restaurant in Washington.

The uproar over Mr. Flynn’s Twitter post cast a harsh spotlight on the views that he and his father, Lt. Gen. Michael T. Flynn, aired on social mediathroughout the presidential campaign. Both men have shared fake news stories alleging that Mrs. Clinton committed felonies, and have posted their own Twitter messages that at times have crossed into Islamophobia.

But their social media musings apparently attracted little attention from Mr. Trump or his transition team before a North Carolina man fired a rifle on Sunday inside Comet Ping Pong, which was the subject of false stories tying it and the Clinton campaign to a child sex trafficking ring.

Hours after the episode, the younger Mr. Flynn, 33, went on Twitter to say that until “Pizzagate” was proved false, it remained a story.

Until #Pizzagate proven to be false, it'll remain a story. The left seems to forget #PodestaEmails and the many "coincidences" tied to it. https://t.co/8HA9y30Yfp

But later in the morning, Jason Miller, a transition spokesman, tacitly acknowledged that Mr. Flynn had worked for the transition, saying in a conference call that Mr. Flynn was now no longer involved.

Mr. Miller did not say what prompted the dismissal of Mr. Flynn, but two other Trump transition officials said it was tied to his Twitter posting.

The move may have cost the younger Mr. Flynn an eventual post in the White House. Until Tuesday, he had planned to join his father on the staff of the National Security Council and had even started the process of getting a security clearance, according to an acquaintance who spoke on the condition of anonymity to avoid upsetting the Flynns.

.@mike_pence: Gen. Flynn's son has no involvement in the transition whatsoever https://t.co/Te7XpUfxxg


Despite the younger Mr. Flynn’s abrupt removal from the transition team, there was no indication that Mr. Trump was reconsidering his choice of General Flynn, 57, a former director of the Defense Intelligence Agency, to serve as national security adviser.

But beyond the tight circle around Mr. Trump, there were growing concerns in Washington about General Flynn’s fitness for the job, fueled by talk of his temperament, his conspiratorial worldview and his own incendiary Twitter postings.

Many Democrats were openly critical from the moment the appointment was announced last month, and several prominent Republican national security officials also quietly voiced concerns. Now, with Mr. Flynn under growing scrutiny, some are beginning to speak publicly.

“The national security adviser should have a moderating effect on the instincts of the president, and it remains to be seen if Mike can do that,” Michael V. Hayden, a former director of both the C.I.A. and the National Security Agency, said in a telephone interview on Tuesday.

The role of national security adviser calls for mediating the conflicting views of cabinet secretaries and agencies, and sifting fact from speculation and rumor to help the new president decide how the United States should react to international crises.

It is a job that is likely to take on greater importance for Mr. Trump, who has no experience in defense or foreign policy issues and has a habit of making broad assertions that are not based in fact.

General Flynn, too, has shown similar inclinations both on Twitter and in his previous jobs in the military. At the Defense Intelligence Agency, his staff members even coined their own name for his sometimes dubious assertions: “Flynn facts.”

“He has regularly engaged in the reckless public promotion of conspiracy theories that have no basis in fact, with disregard for the risks that giving credence to those theories could pose to the public,” Representative Adam Smith of Washington, the ranking Democrat on the House Armed Services Committee, said on Tuesday.

“Someone who is so oblivious to the facts, or intentionally ignorant of them, should not be entrusted with policy decisions that affect the safety of the American people,” Mr. Smith added.

For now, General Flynn appears to be weathering the criticism, which has been far harsher than that directed at other Trump nominees, by keeping a relatively low profile since the election. He has not given interviews — he did not respond to requests for comment — and he has kept his Twitter posts relatively tame, publishing patriotic messages on Veterans Day and more recently praising Mr. Trump’s selection of Gen. James N. Mattis, a retired Marine, for defense secretary.

His son, in contrast, showed no such restraint in the weeks before he was fired, regularly posting on Twitter about conspiracy theories involving Mrs. Clinton and her campaign staff well after the election.

He continued to push his support for the fake news about Comet Ping Pong after his messages on Twitter about Sunday’s episode began attracting widespread attention. It was not until shortly before 3:30 p.m. Monday that he went silent on Twitter.

In one of the last messages he posted, he shared a post from another Twitter user who sought to spread a conspiracy theory that sprang up on the right-wing fringes after the shooting: that the suspect arrested at Comet Ping Pong, Edgar M. Welch, 28, of Salisbury, N.C., was actually an actor, and that the episode was a hoax cooked up to discredit the claim of a sex trafficking ring at the restaurant.