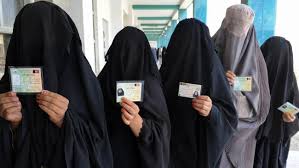 By Anthony Faiola
BERLIN — German Chancellor Angela Merkel, who last year opened the door to nearly 1 million mostly Muslim migrants, staked out a tough new stance on conservative Islam on Tuesday by making her first direct call for a widespread ban on “full veil” religious coverings.
Her backing could add Germany to the growing list of European nations imposing restrictions on Islamic coverings as debates sharpen across the continent over religious tolerance, perceived threats to European identity and possible attacks by Islamists.

It also could signal a pragmatic shift to the right for Merkel, who is seeking a fourth term as Germany’s leader. In the wake of Britain’s vote to leave the European Union and the U.S. election of Donald Trump, the tolerant Merkel became seen as among the last guardians of liberal democracy in the West.

But her handling of the migrant crisis — which hit her approval ratings and caused internal party dissent — is now seen as a critical weakness ahead of next year’s elections.

Her comments also came as German social media buzzed following the arrests of two asylum seekers in five days in connection with three sexual assaults, including the brutal rape and murder of a 19-year old medical student in the picturesque southern city of Freiburg. Right-wing politicians are openly blaming Merkel’s policy for what they decry as a migrant-fueled crime wave.

Yet Merkel on Tuesday issued a reminder that she still can play the conservative card.

Speaking to a cheering conference of her center-right Christian Democratic Union (CDU), she used her strongest language yet to back a ban on certain Islamic coverings first proposed by conservatives in her party. Some are calling for a law making it a regulatory offense for women to cover their faces in courtrooms, administrative buildings and schools, as well as while driving or attending demonstrations.

“The full veil is not appropriate here,” Merkel said. “It should be banned wherever it’s legally possible.”

Political message
Women in Germany’s Muslim community of 4.7 million who actually wear a full burqa — or a loose veil that covers the entire body, often including mesh over the eyes — are exceedingly rare. Some experts suggest there may be only a few hundred at most.

Merkel has previously called full Muslim veils a hindrance to migrant assimilation. But her words at the party conference — reaffirming her as the CDU candidate and leader — seemed aimed at appeasing critics who have charged her with recklessly opening the door last year to hundreds of thousands fleeing war. She also repeated her worries about the alleged spread of Islamic sharia law in some migrant communities.
“We don’t want any parallel societies,” she said. “Our law takes precedence before tribal rules, codes of honor and sharia.”

Other nations in Europe have imposed bans on Islamic coverings. But Germany — saddled with the dark past of World War II — had shied away from doing so, citing the need to uphold religious freedoms. Muslim groups said they were caught off guard by Merkel’s call.

“I think this is election campaigning,” said Burhan Kesici, chairman of the Islamic Council of the Federal Republic of Germany. “It’s a populist statement. I was surprised . . . especially since she hasn’t said this with such clarity before.”

He said that physical attacks against Muslim women with headscarves have increased and that he feared heightened rhetoric could worsen the trend.

The wording for the law planned in Germany probably would mirror the moves in neighboring France, not referring specifically to conservative Muslims but clearly aimed at them.

Yet strong differences remain within Merkel’s party about how far such a proposed law should go. Officials at various German ministries are already drafting language that would make it an offense for civil servants to wear garments that “make open communication more difficult or impossible.”

The law also would impose fines on women who refuse to take off covering veils to allow law enforcement officials to compare their faces with photo IDs.

But some are calling for an even broader ban before the bill is submitted to Parliament in coming weeks.

‘Live together’
Since the height of the crisis last year, Merkel has taken steps to stem the tide of migrants, including negotiating a deal with Turkey this year to block more from crossing into Europe. On Tuesday, she reiterated that she would attempt to thwart any new wave of asylum seekers, many of them seeking to reach the West from war-ravaged places such as Syria and Iraq.

“A situation like the one in the late summer of 2015 cannot, should not and must not be repeated,” she said. “That was and is our, and my, declared political aim.”

Merkel’s government is under renewed pressure following the arrests by local police in two German states of a 31-year old Iraqi and a 17-year old Afghan. The 17-year old is the prime suspect in the rape and murder of the German medical student. The Iraqi, married with two children, has been charged with raping two Chinese students. Both arrived in Germany last year with the massive wave of migrants.

The chancellor has condemned the violence while reminding Germans that it is wrong to tarnish all migrants and refugees with the crimes of a small minority. But her critics have lashed out hard.

“Of course it’s always the offender who is responsible for a crime,” said Ronald Gläser, a local Berlin politician with the populist Alternative for Germany party, referencing the case of the young Afghan. “But if she hadn’t opened the borders, he wouldn’t have come into the country.”

Merkel’s call to ban coverings echoes laws in France and other European nations to put restrictions on full-face coverings such as the burqa or other Islamic traditional garb for women such as the niqab, which shows only the eyes. The European Court of Human Rights upheld the latter law in 2014 after it was challenged by a 24-year-old Muslim woman. The court agreed with the French government that the “burqa ban” made it easier for citizens to “live together.”

In 2004, the French government passed a highly controversial law banning any overt religious symbols from schools, which critics interpreted as a ban on Muslim headscarves by another name. In 2010, the government passed another law, banning outright any face-covering garments from public spaces, arguing that these violate individual freedoms, especially of women.

This summer, roughly 30 French towns banned the “burkini,” a swimsuit designed to allow Muslim women to enjoy the beach while observing traditional codes of modesty. Manuel Valls, now a Socialist Party candidate for the French presidency, called the burkini a “provocation” and an insult to France’s strict interpretation of secularism. French courts have since overruled several such bans.

But Muslims often say that these restrictions — carried out in the name of secularism — are hypocritical, targeting one particular group in a society that in theory is committed to liberty, equality and fraternity. France’s public holidays, they say, are all Christian in origin, and secularism often becomes a means of attacking Islam in a country still reeling from a string of terrorist attacks committed by Islamic State militants.