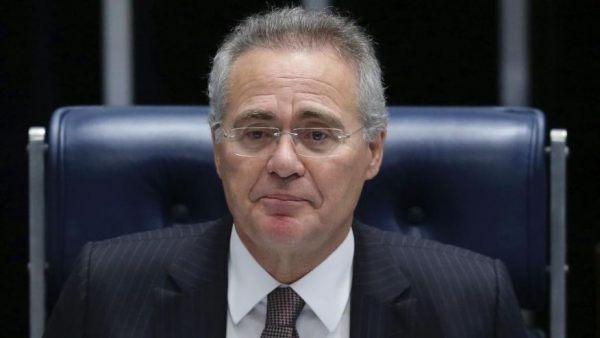 Brazil’s Supreme Court on Monday removed Senator Renan Calheiros as president of the Senate after the top court indicted him last week on charges of embezzlement, a court spokesman said, a move that could put the government’s belt-tightening agenda in peril.

His replacement on Tuesday by Senator Jorge Vianna of the leftist Workers Party, who opposes spending cuts, could block steps to control a widening budget deficit and recoup confidence in Latin America’s largest economy mired in a deep recession.

Justice Marco Aurelio de Mello removed Calheiros based on a majority ruling by the high court last month that any person indicted for a crime could not be in the presidential line of succession. The head of the Senate is the second in line after the speaker of the lower house, as Brazil does not have a vice president at the moment.

The judge’s ruling must be put to the full court, which is expected to uphold the injunction on Wednesday since six of its 11 justices favored the new presidential succession rule.

The removal of Calheiros was a new blow for President Michel Temer whose six-month-old government has been weakened by corruption scandals as it strives to push through unpopular austerity measures, including a cap on federal spending that is scheduled to be put to a final vote in the Senate on Dec. 13.

“The injunction is terrible news for Temer because it puts the spending ceiling at risk given that the deputy leader of the Senate is from the Workers Party,” said Leonardo Barreto, head of Brasilia-based political consultancy Factual. “This can delay the final vote and send the wrong signal to markets,” he said.

Calheiros declined to comment on the decision but his office said he would step down on Tuesday morning when he is officially notified, at which point Vianna, the vice president of the upper chamber, becomes leader until Senate elections in February.

The Workers Party quickly said the fiscal measures should be delayed until the new session next year.

“How can we vote for this explosive agenda in the climate of instability in which no one knows who is in command of the Senate,” Workers Party Senator Paulo Paim said.

Calheiros was indicted Dec. 1 on charges of misusing public funds in a nine-year-old case involving child support for a daughter he had in an extramarital affair, including billing the Senate for car rentals with false contracts.

The change of leadership in the Senate comes at a crucial moment for Temer’s efforts to pass austerity measures through Congress to restore fiscal discipline to Brazil’s overdrawn government accounts.

The government’s leader in Congress, Senator Romero Juca, said the removal of Calheiros would not alter plans for the Dec. 13 vote on the 20-year spending cap, the key measure in Temer’s plan to rein in a widening budget deficit.

But the uncertainty is expected to rattle investors who are looking for signs that Brazil is putting its books in order before they decide to invest in the country again.

Brazil lost its investment-grade credit rating last year due to the fiscal deficit run up by the Workers Party government of impeached President Dilma Rousseff, who was replaced by Temer in May.

The fall of Calheiros was a question of time because he faces 11 corruption investigations, most of them related to the massive bribery and kickback scandal centered on state-run oil company Petrobras.

The ousting of Calheiros was welcomed by some of his peers who were critical of his attempts to curtail the work of prosecutors in the Petrobras scandal.

“It was deeply unsettling for all of us to have an indicted person as leader,” said Senator Ricardo Ferraço of centrist PSDB party. “This is timely and will clean things up.”