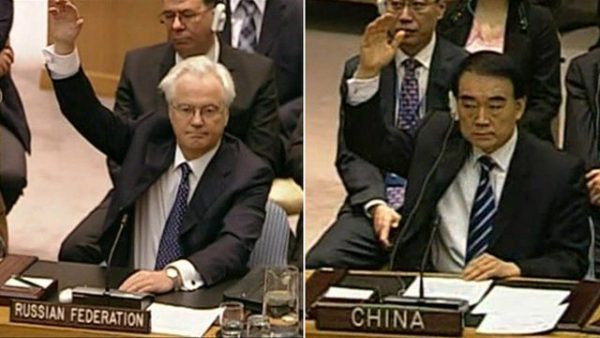 Russia and China on Monday vetoed a UN Security Council resolution calling for a seven-day ceasefire in the embattled Syrian city of Aleppo.

Venezuela also voted against the text, while Angola abstained. The 11 other council members voted in favor.

The vote marked the sixth time Russia has blocked a council resolution on Syria since the conflict began in March 2011, and the fifth for China.

A close ally of Syrian President Bashar al-Assad, Moscow had expressed strong reservations about the text, the subject of weeks of negotiations.

In an eleventh-hour effort, Russia tried to postpone the vote until at least Tuesday, when the Americans and Russians are set to meet in Geneva.

But the text’s main backers — Paris, London and Washington — decided to go ahead anyway.

Russia says the Geneva talks will concern a plan for all rebel fighters to withdraw from eastern Aleppo, under siege by the regime. But the rebels have rejected the plan.

The two sides “are close to an agreement on the basic elements,” Russia’s UN ambassador Vitaly Churkin said.

But deputy US envoy Michele Sison suggested there was no deal, accusing Churkin of using a “made-up alibi.”

“We will not let Russia string along the Security Council,” she added.

“We will continue bilateral negotiations (with Russia) to relieve the suffering in Aleppo, but we have not reached a breakthrough because Russia wants to keep its military gains.”

Had the resolution been adopted, it would have been a “fragile glimpse of hope” and allowed to “save lives,” French ambassador Francois Delattre said.

He accused Russia of having “decided to take Aleppo regardless of the human cost.”

The veto prevents the Security Council from “assuming its responsibilities to Syria’s civilian population, which faces the destructive madness of the Bashar al-Assad regime, as well as terrorist groups, starting with Daesh,” he said, using a term for the Islamic State jihadist group.

“The military escalation is… a stalemate that only aggravates the population’s suffering and nourishes terrorism,” Ayrault added.

“Russia seems to not want any interference with its & Iran’s joint military ops with Syria military in Aleppo, despite cost to civilians,” the group’s UN director Louis Charbonneau tweeted.

The draft text demanded that “all parties to the Syrian conflict shall cease… any and all attacks in the city of Aleppo.”

It also called for the sides to “allow urgent humanitarian needs to be addressed,” meaning permitting emergency services to enter and serve tens of thousands of residents in the besieged areas.

The resolution’s drafters wanted the temporary ceasefire to pave the way for a cessation of hostilities across Syria, although that would not have applied to military operations targeting “terrorist groups” such as the Islamic State group or ex-Al-Qaeda affiliate Fateh al-Sham Front, previously known as Al-Nusra.