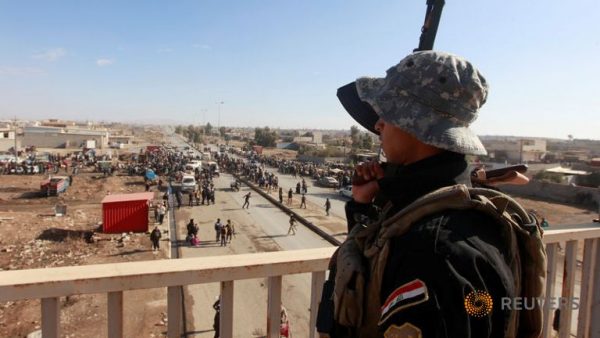 No food or fuel has reached Mosul in nearly a week and the onset of rain and cold weather threatens a tough winter for more than a million people still in Islamic State-held areas of the city, residents said on Saturday.

Iraqi troops waging a six-week-old offensive against the militants controlling Mosul have advanced into eastern city districts, while other forces have sealed Mosul’s southern and northern approaches and 10 days ago blocked the road west.

But their advance has been hampered by waves of counter-attacks from the ultra-hardline Islamists who have controlled the city since mid-2014 and built a network of tunnels in preparation for their defense of north Iraq’s largest city.

The slow progress means the campaign is likely to drag on throughout the winter, and has prompted warnings from aid groups that civilians face a near complete siege in the coming months.

A trader in Mosul, speaking by telephone, said no new food or fuel supplies had reached the city since Sunday.

Despite attempts by the militants to keep prices stable, and the arrest last week of dozens of shopkeepers accused of hiking prices, the trader said food had become more expensive and fuel prices had tripled.

“We’ve been living under a real state of siege for a week,” said one resident of west Mosul, several miles (km) from the frontline neighborhoods on the east bank of the Tigris river.

“Two days ago the electricity generator supplying the neighborhood stopped working because of lack of fuel. Water is cut and food prices have risen and it’s terribly cold. We fear the days ahead will be much worse”.

A pipeline supplying water to around 650,000 people in Mosul was hit during fighting this week between the army and Islamic State. A local official said it could not be fixed because the damage was in an area still being fought over. 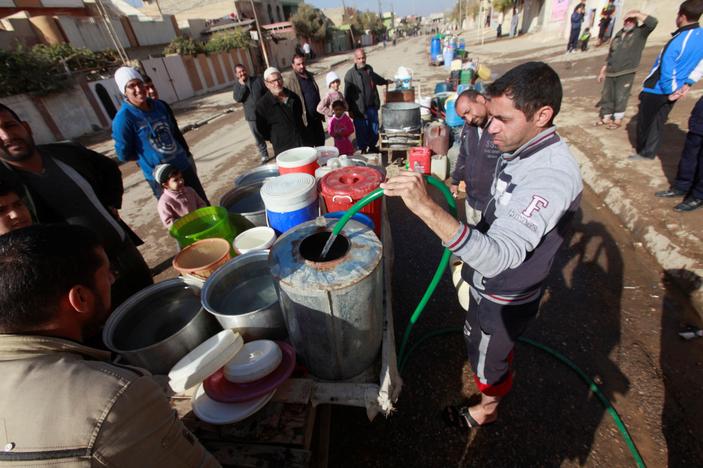 Winter conditions will also hit the nearly 80,000 people registered by the United Nations as displaced since the start of the Mosul campaign. That number excludes many thousands more who were forcibly moved by Islamic State, or fled from the fighting deeper into territory under its control.

Islamic State authorities, trying to portray a sense of normality, released pictures which they said showed a Mosul market on Friday. It showed a crowd of people and a stall selling vegetable oil and canned food but no fresh produce.

They also said they carried out several counter attacks in the last 24 hours against Iraqi troops in eastern Mosul and the mainly Shi’ite Popular Mobilisation forces who have taken territory to the west of the city.

Amaq news agency, which is close to Islamic State, said they retook half of the Shaimaa district in southeast of the city on Friday, destroyed four army bases in the eastern al-Qadisiya al-Thaniya neighborhood and seized ammunition from fleeing soldiers in al-Bakr district, also in the east.

A source in the Counter Terrorism Services, which are spearheading the army offensive, said Islamic State exploited the bad weather and cloud cover, which prevented air support from a U.S.-led international coalition.

He said the militants had taken back some ground, but predicted their gains would be short-lived.

“This is not the first time it happens. We withdraw to avoid civilian losses and then regain control. They can’t hold territory for long,” the source said.

Amaq also said Islamic State fighters waged attacks on Saturday against the Popular Mobilisation paramilitary units near the town of Tal Afar, west of Mosul, showing footage of two damaged vehicles, one with interior ministry markings on it.

A spokesman for the militias said those attacks had been repelled. “Daesh attacked at dawn to try to control the village Tal Zalat,” said Karim Nouri. “Clashes continued for two hours, until Daesh withdrew, leaving bodies (of dead fighters) behind.”

In Baghdad, a car bomb blew up in a crowded market in the center of the city on Saturday, killing seven people and wounding 15, police and medical sources said.

There was no immediate claim of responsibility, but Islamic State fighters have stepped up attacks in the Iraqi capital and other cities since the start of the Mosul operations.

The campaign pits a 100,000-strong U.S.-backed coalition of army troops, special forces, federal police, Kurdish fighters and the Popular Mobilisation forces against a few thousand militants in the city.

Defeat would deal a heavy blow to Islamic State’s self-styled caliphate in Iraq and Syria, announced by its leader Abu Bakr al-Baghdadi from a Mosul mosque two years ago.