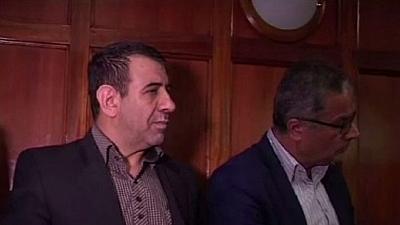 Sayed Nasrollah Ebrahim and Abdolhosein Gholi Safaee were arrested Tuesday in an Iranian diplomatic car on Bishops Road in Nairobi, after they had come from visiting Kamiti Prison where they saw two other Iranians who have been jailed for 15 years on terrorism
Share:

Iran has urged Kenya to release two of its citizens charged by a Nairobi court with planning a terrorist act after being arrested for filming outside the Israeli embassy.

Foreign Ministry spokesman Bahram Ghasemi said on December 2 that the two men, Nasrollah Ebrahimi and Abdolhossein Safaee, are “official lawyers of the Justice Ministry” who, he said, had traveled to Nairobi to provide legal advice to two Iranian prisoners in Kenya.

Ebrahimi and Safaee were arrested on December 1 by Kenyan antiterrorism police after filming outside the Israeli embassy, allegedly in an Iranian diplomatic car.

Ghasemi said the arrest of the two men had been the result of a “misunderstanding” after “the intervention of some third parties into the case.”

He called for their immediate release.

The two men, along with a Kenyan driver who was also charged, had been to Kamiti prison outside Nairobi to visit two other Iranians serving a 15-year term for possessing explosives after being convicted in 2013.

A Kenyan court said the two were members of Iran’s Islamic Revolutionary Guards Corps Quds Force and that they were plotting attacks against Western targets in Kenya.