Is Trump changing? Yes as far as Pakistan is concerned. Showered its PM Sharif with praise 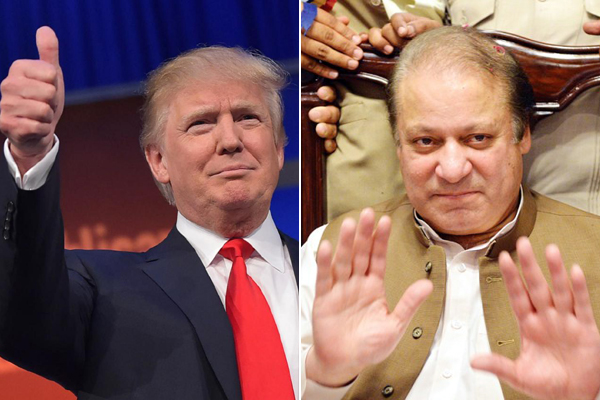 President-elect Donald Trump showered Pakistani Prime Minister Muhammad Nawaz Sharif with praise during a phone call on Wednesday: “You are a terrific guy. You are doing amazing work which is visible in every way,”
Share:

Pakistan’s Press Information Bureau on Wednesday released a readout of a phone call on Monday between Pakistan’s prime minister, Nawaz Sharif, and the U.S. president-elect, Donald Trump. The readout is unusual in that it focuses almost entirely on Trump’s contributions to the conversation, and reproduces them in a voice that is unmistakably his.

The readout is reproduced in full below:

Prime Minister Muhammad Nawaz Sharif called President-elect USA Donald Trump and felicitated him on his victory. President Trump said Prime Minister Nawaz Sharif you have a very good reputation. You are a terrific guy. You are doing amazing work which is visible in every way. I am looking forward to see you soon. As I am talking to you Prime Minister, I feel I am talking to a person I have known for long. Your country is amazing with tremendous opportunities. Pakistanis are one of the most intelligent people. I am ready and willing to play any role that you want me to play to address and find solutions to the outstanding problems. It will be an honor and I will personally do it. Feel free to call me any time even before 20th January that is before I assume my office.

On being invited to visit Pakistan by the prime minister, Mr. Trump said that he would love to come to a fantastic country, fantastic place of fantastic people. Please convey to the Pakistani people that they are amazing and all Pakistanis I have known are exceptional people, said Mr. Donald Trump.

Trump’s transition team did not respond to immediate requests for comment or corroboration.

Lavishing praise on the Pakistanis would be a major turnaround for the president-elect. In 2012, Trump took to his favorite social media platform, Twitter, to denounce Pakistan.

On Jan. 17 of that year, he wrote: “Get it straight: Pakistan is not our friend. We’ve given them billions and billions of dollars, and what did we get? Betrayal and disrespect — and much worse. #TimeToGetTough”

Trump has also proposed restricting the entrance of Muslims to the United States, in particular from countries that are hotspots for what he calls “radical Islamic terror.” That list of countries would certainly include Pakistan.

Trump has also spoken highly of Pakistan’s archrival, India. During his campaign, he courted the Hindu-American vote, and said that in a Trump presidency, India and the United States would be “best friends.”
“There won’t be any relationship more important to us,” Trump said in Edison, N.J., at a rally organized by self-described Indian nationalists.

Pakistan is a major beneficiary of U.S. assistance and is slated to receive almost $1 billion in economic and security assistance in the 2017 financial year.

Sharif, the Pakistani prime minister, is markedly less loved in his country than Trump’s praise would make it seem. He is dogged by allegations of corruption, and the release of the Panama Papers last summer appeared to confirm many Pakistanis’ suspicions. He is being investigated for conflicts of interest stemming from four luxurious apartments occupied by members of his family in London, and has vowed to step down if found guilty of siphoning funds.