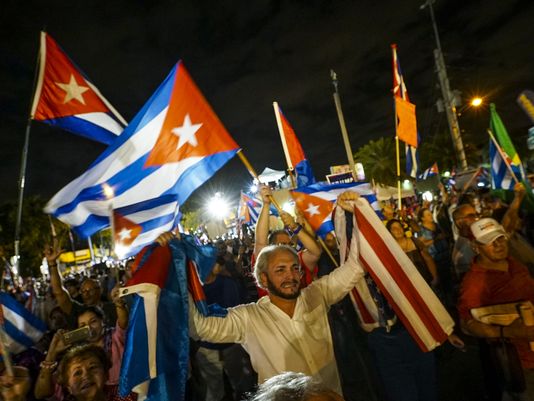 he crowd sings and celebrates to the music. The Bay of Pigs Veterans Association held a rally in Little Havana for Cuban freedom. These older Cuban exiles are dwindling, while the younger generation of Cubans are more lenient toward the Castro regime. (Photo: Andrea Melendez/The News-Press)
Share:

For Esteban Bovo, Fidel Castro’s death has been decades in the making.

The 78-year-old Cuban exile is one of hundreds who remain part of the 2506 brigade, a CIA-sponsored group of men sent to overthrow Fidel Castro in 1961 in what has come to be called the Bay of Pigs Invasion.

“I cannot tell you that I’m happy that he’s dead,” Bovo said, “the only thing I’m sorry about is I could not dispose of him with our bare hands.”

Bovo was one of hundreds who attended a planned rally in Little Havana, a Cuban and immigrant enclave in Miami. The Miami Police Department estimated that about 1,400 attended the rally that shutdown five city blocks on Calle Ocho, or Eighth Street, the city’s famed roadway filled with Cuban restaurants, cigar shops and bakeries. After the announcement that Fidel Castro died late Friday night, spontaneous celebrations erupted at Miami’s Versailles restaurant, about seven miles from Wednesday’s rally.

Street vendors hawked Cuban flags on the sidewalk while restaurant goers listened to men tap on bongos. Others danced to the musical rhythms of salsa and Cuban song.

“I was thrown away by Fidel Castro,” said Jose Diaz, one of the vendors. He arrived in the United States 37 years ago.  “They called me a chronic dissident.”

Bovo, a part of the Bay of Pigs Veterans Association and a former pilot in the Cuban Air Force, said today is about reminding the world that Cubans want political change on the island.

Speakers called on exiles to unify to show the world that political change needs to come to Cuba .

Sylvia Iriondo, of Mothers and Women Against Repression in Cuba, said the Cuban community should ask four things moving forward.

Iriondo said she wants the U.S. government to abandon normalization of ties with the Cuban government. She said she also hopes President-elect Donald J. Trump’s administration will support the Cuban Liberty Act, which continues the embargo against Cuba. Iriondo, in her speech, said the international community needs to condemn the acts of the Castro regime and provide support and coordination to those dissidents fighting on the island.

“We need to continue with the immobilization and pressure,” Iriondo said. “We need to stay involved.”

Miriam Cajiea said she was touched by Iriondo’s words. The 86-year-old arrived in Miami 56 years ago.

Now it’s time to do the hard work,” Cajiea said.

Cajiea said she is hopeful Trump will spur political change in Cuba.

So is Bovo, the veteran of the Bay of Pigs Invasion. Bovo said he believes Raul Castro will have difficulties moving forward.

However, the country 90 miles south of Florida is unlikely to change anytime soon, experts say.

Jaime Suchlicki, a professor at the University of Miami and director of the school’s Institute for Cuban and Cuban-American Studies, agrees.

The only thing that is different, Suchlicki said, is that Fidel Castro who “has been irrelevant for the past six years” is dead.

“What he is passing is the mantel of the presidency, which is going to be mostly ceremonial,” Suchlicki said.

The demonstration in Little Havana demonstrates the desire Cubans have to see their mother country evolve, Suchlicki said. President Barack Obama embracing relations with Cuba hasn’t changed the island’s politics because there were no concessions made by Raul Castro, Suchlicki said. He said he believes the Donald Trump administration may tighten immigration and scrap the wet-foot, dry-foot policy, but not much else will change for Cuba.

“Cuba has had Canadians, Latin-American visitors visiting Cuba every year for the past 10 years,” Suchlicki said. “Why would an American from Iowa bring in democracy?”

Raul Castro is relinquishing the presidency in 2018, but he will remain as the chairman of the Communist Party and head of the military, Suchlicki said.