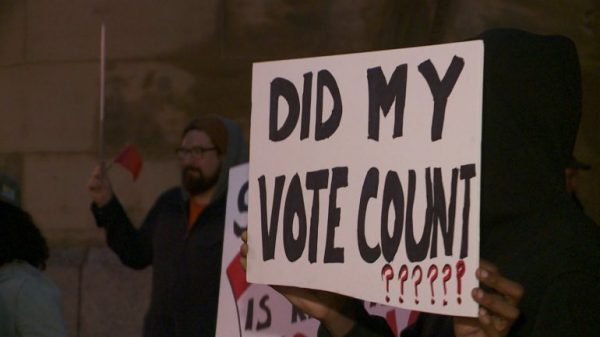 Officials with the Wisconsin Elections Commission have notified all 72 county clerks to prepare for a recount.
Share:
Hillary Clinton’s campaign will participate in vote recounts of Wisconsin, Pennsylvania and Michigan if they take place, drawing a rebuke from Donald Trump’s team that the Democrat is being a “sore loser” and part of a “ridiculous” effort.

If Green Party candidate Jill Stein initiates recounts in those states as she intends, the Clinton campaign “will participate in order to ensure the process proceeds in a manner that is fair to all sides,” Clinton campaign lawyer Marc Elias said Saturday in a post on the blogging website Medium.com. He added that he doesn’t expect the action to overturn Trumps election.

Trump focused on Stein, not Clinton, in a response. “The people have spoken and the election is over, and as Hillary Clinton herself said on election night, in addition to her conceding by congratulating me, ‘We must accept this result and then look to the future,”’ he said in a statement.

Kellyanne Conway, who was Trump’s campaign manager and is now a senior adviser, was less conciliatory. “What a pack of sore losers,” she said in a statement. “After asking Mr. Trump and his team a million times on the trail, ‘Will HE accept the election results?’ it turns out Team Hillary and their new BFF Jill Stein can’t accept reality.”
“Rather than adhere to the tradition of graciously conceding and wishing the winner well, they’ve opted to waste millions of dollars and dismiss the democratic process. The people have spoken. Time to listen up. #YesYourPresident,” Conway said.

“This recount is just a way for Jill Stein, who received less than one percent of the vote overall and wasn’t even on the ballot in many states, to fill her coffers with money, most of which she will never even spend on this ridiculous recount,” he said. “All three states were won by large numbers of voters, especially Pennsylvania, which was won by more than 70,000 votes.”

Stein said on her website that she’s raised more than $5.7 million for her recount effort so far, with a $7 million goal. The funds raised so far will cover costs in Wisconsin and Pennsylvania, she said.

“This is a scam by the Green Party for an election that has already been conceded, and the results of this election should be respected instead of being challenged and abused, which is exactly what Jill Stein is doing,” Trump added.

The Democrat’s campaign didn’t plan to initiate the recounts on its own because it hasn’t found “any actionable evidence of hacking or outside attempts to alter the voting technology,” Elias wrote.

A senior administration official, meanwhile, said in a statement that the government didn’t observe any increased level of malicious cyber activity aimed at disrupting the election on election day and believes the elections were free and fair from a cybersecurity perspective.

Elias also isn’t expecting the recounts to erase what he said was a 107,000 combined vote margin separating the candidates in the three battleground states and overturning the election of Trump, who is due to be sworn in as president in January.

“We do so fully aware that the number of votes separating Donald Trump and Hillary Clinton in the closest of these states — Michigan — well exceeds the largest margin ever overcome in a recount,“ Elias said. “But regardless of the potential to change the outcome in any of the states, we feel it is important, on principle, to ensure our campaign is legally represented in any court proceedings and represented on the ground in order to monitor the recount process itself.”
Elias said there is also an obligation to the voters now that a recount is planned in Wisconsin and potentially the other two states. The Wisconsin Elections Commission said Friday that it had received Stein’s petition.

Donald McGahn, who on Friday was selected by Trump as White House counsel, will be the Republican’s point person on the Wisconsin recount. He joined senior staff officials in briefings on Saturday regarding the latest developments, according to a person familiar with the Trump transition process who wasn’t authorized to speak on the record.

“We believe we have an obligation to the more than 64 million Americans who cast ballots for Hillary Clinton to participate in ongoing proceedings to ensure that an accurate vote count will be reported,” Elias said.

The 2016 election cycle “was unique in the degree of foreign interference witnessed throughout the campaign,” Elias said, noting that the U.S. government had concluded Russian state actors were behind hacks of the Democrat National Committee and the personal e-mails of some Clinton campaign officials.

“We have quietly taken a number of steps in the last two weeks to rule in or out any possibility of outside interference in the vote tally in these critical battleground states,” he said, including having data scientists and lawyers comb over the results, and monitoring and staffing post-election canvasses.