As foreign firefighters help Israel combat wildfire, some are calling it ‘Fire Intifada’ 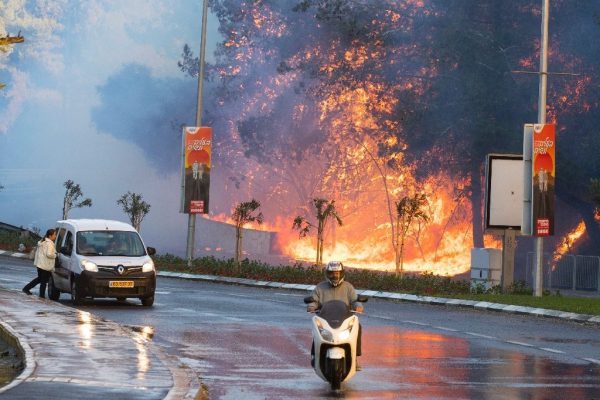 1 / 12 Israeli authorities evacuated 60,000 people from Haifa because of a spate of wildfires
Share:
The first foreign firefighting planes on Friday started helping Israel tackle a vicious wave of wildfires which have forced tens of thousands to flee their homes.

Faced for the past four days with fires across the country fed by drought and high winds, Israel has been promised airborne assistance by Russia, France, Turkey, Cyprus, Greece, Italy and Croatia.

On the ground, Palestinian firefighters on Thursday night joined the Israelis, sending four fire engines to the northern city of Haifa and four more to the village of Beit Meir, near Jerusalem.

In the cooperative village of religious Jews, where about 400 residents were evacuated from their homes, Israeli and Palestinian crews fought side by side against the flames.

The fires appeared to be easing somewhat Friday, despite the persistent wind, although authorities warned that they could flare up again at any time.

Many Haifa residents spent the night away from home after tens of thousands were evacuated Thursday from the path of towering flames which threatened apartment blocks, kindergartens and entire neighbourhoods.

Police gave them permission to return home on Friday afternoon.

The Haifa fires were “under control” on Friday, Rosenfeld said, although large numbers of police, firefighters and rescue workers were still on the streets of the worst affected neighbourhoods to monitor and respond to possible new outbreaks, an AFP journalist said.

Israeli foreign ministry spokesman Emmanuel Nahshon said some of the foreign planes were in action on Friday.

“We are deeply grateful to the international community,” he said. “Its mobilisation proves that in times of crisis we can count on many friends in this region and beyond.”

The rising number of fires since Tuesday has stretched Israel’s capacity to deal with them, raising questions over lessons learned since a devastating blaze near Haifa killed 44 people in 2010.

The growing wave, with sometimes dozens of outbreaks a day reported up and down the country, has heated up Jewish Israelis’ suspicions of the state’s Arab minority and the Palestinians.

Arab Israelis make up about 17.5 percent of the country’s population.

Descendants of Palestinians who remained on their land after the creation of the state of Israel in 1948, they largely identify themselves as Palestinians.

Statements by several Israeli officials have implicated Arabs, with Internal Security Minister Gilad Erdan saying that up to half of the blazes had been “arson terror”.

Israeli police have arrested a number of people in connection with the fires.

Some are suspected of criminal negligence leading to accidental fires in tinder-dry woodland and undergrowth, while there are also suspicions that some may have been deliberate and related to the Israel-Palestinian conflict.

“Every fire caused by arson or incitement to arson is terror and will be treated as such,” he told reporters.

And Education Minister Naftali Bennett of the far-right Jewish Home party appeared to blame the alleged arson on members of the Arab minority when he said the fires could not have been lit by Jews.

of burning it,” he Tweeted.

Some Israeli media joined in, speculating on the possible emergence of a “fire intifada”, or Palestinian uprising, but Yediot Aharonot newspaper disapproved.

“‎When the prime minister calls this terror, even if he doesn’t say Arabs, a link is made that is supposed to be understood by everyone, ‘‎This is a wave of terror, the Arabs are burning down the country,'” its commentator Alex Fishman wrote.

“But it is a long road from that to calling this wave of fires in the last three days a ‘fire Intifada’.” ‎

“I really advise that we be careful not to add to the flames,” he told Israeli public radio.

“The picture is less clear than bombastic statements say. There is no doubt that fires have been started, the question is if it was deliberate.”