U.K. rejects Trump’s call for Nigel Farage to be made Ambassador to US. “No vacancy” 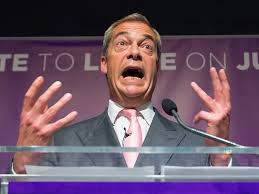 Once again, President-elect Donald J. Trump seems to have gone out of his way to embarrass the British government.

After Election Day, he spoke with nine other leaders before taking a call from Prime Minister Theresa May and then told her casually, “If you travel to the U.S., you should let me know.”

In a Monday night Twitter post, just as the British government was reaching out to Mr. Trump to reaffirm the “special relationship” Britons prize with the United States, he suggested the appointment of Nigel Farage, the interim leader of Britain’s populist, anti-immigrant U.K. Independence Party, as United States ambassador.

The prime minister’s office quickly dismissed the recommendation, telling reporters: “There is no vacancy. We have an excellent ambassador to the U.S.” in Kim Darroch, a former national security adviser.

Mr. Farage, a staunch backer of Britain’s withdrawal from the European Union and an outspoken supporter of Mr. Trump, is better known at home for his fiery speeches than for his diplomatic skills.

He appeared on the campaign trail with Mr. Trump and inspired the candidate to promise his supporters a “Brexit plus plus plus,” referring to the June 23 referendum in Britain to leave the European Union.

Mr. Farage, whose party is a right-wing rival and irritant to Mrs. May’s Conservative Party, and Mr. Trump have struck up a warm friendship. Mr. Farage visited the president-elect in Manhattan on Nov. 12, four days after the election. A photo of the two men posing happily in front of a gold-plated elevator went viral.

Still, few expected Mr. Trump to trample on the normal rules of diplomatic protocol by suggesting in public that the British government should make his political ally its envoy to the United States.

That is exactly what Mr. Trump did in his Twitter post, in which he said, “Many people would like to see @Nigel_Farage represent Great Britain as their Ambassador to the United States. He would do a great job!”

“Now Trump tweets that he wants Nigel Farage as UK Ambassador to the US,” Carl Bildt, a former prime minister and foreign minister of Sweden, said on Twitter. “Slightly original, to put it very mildly. No business of his.”

Mr. Farage himself described the comments from Mr. Trump as a “bolt from the blue,” but added that “if I could help the U.K. in any way I would.”

For Mrs. May, the intervention comes at a time when her government has been working to bolster its contacts with the transition team around the president-elect.

Britain has long prized its special ties to the United States and its role as a trusted security and intelligence partner; it is more eager than ever to improve those connections.

With Britain committed to leaving the European Union, which has a single market of around 500 million people, the government hopes to strike new trade deals around the world and has high hopes of one with the United States.

On Monday, Mrs. May’s office confirmed that an invitation to Mr. Trump to pay a full state visit to Britain was under consideration.

Mrs. May’s government has struggled to establish relations with the Trump transition team after some of its senior members harshly criticized Mr. Trump during the campaign. For example, when Mr. Trump was pursuing the Republican nomination, Boris Johnson, then the mayor of London, accused Mr. Trump of being “out of his mind” and of possessing “a quite stupefying ignorance” that made him unfit for the presidency.

Mr. Johnson, now the foreign minister, has changed his tune, telling a Czech newspaper that Mr. Trump is a “dealmaker, he is a guy who believes firmly in values that I believe in too — freedom and democracy. As far as I understand he is in many aspects a liberal guy from New York.”

In an op-ed article published on Tuesday on Breitbart News, the far-right website once run by Stephen K. Bannon, who is now Mr. Trump’s chief strategist, Mr. Farage denounced the British government, saying its leaders had not yet absorbed the lessons of Brexit and the Trump victory.

“Those who supported Remain now hold senior positions,” Mr. Farage said, referring to opponents of Brexit, primarily Mrs. May and Philip Hammond, the chancellor of the Exchequer. “Worst still, those who were openly abusive about Trump now pretend to be his friend.

“It is career politics at its worst, and it is now getting in the way of the national interest.”

Appointing Mr. Farage to such a high-profile and politically sensitive position would almost certainly be a step too far for the government, however, given his status in Britain.

When the idea of using Mr. Farage’s friendship with Mr. Trump as a diplomatic tool was made earlier this month, the first minister of Wales, Carwyn Jones, said it would be like “giving a child a chain saw.”