Trump backs away from his threat. Won’t “lock up” Hillary Clinton 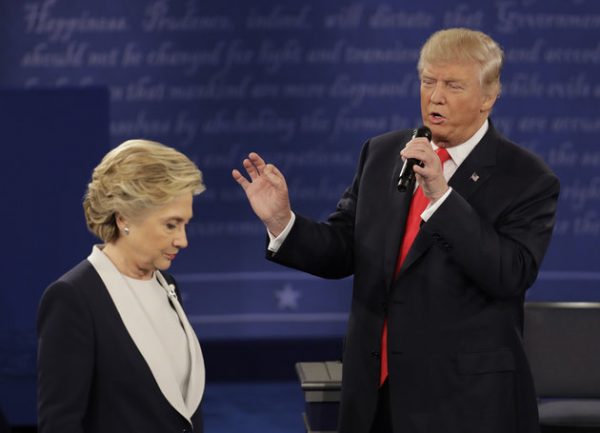 Democratic presidential nominee Hillary Clinton walks past Republican presidential nominee Donald Trump during the second presidential debate at Washington University in St. Louis, Sunday, Oct. 9, 2016. (AP Photo/Patrick Semansky)
Share:
After running a campaign that had, as one of its main rallying cries, a chant to lock up the opposition candidate, President-Elect Donald Trump has pledged to avoid doing just that.

The incoming administration will not be appointing a special prosecutor to investigate Hillary Clinton’s use of a private email account and server while at the State Department, MSNBC’s Morning Joe reported on Tuesday. Trump’s campaign manager, Kellyanne Conway, confirmed as much later on the same program. However, it’s unclear how or if the incoming attorney general would follow these instructions, since they tend to have independent say over the cases they pursue.

Kellyanne Conway confirms decision not to seek special prosecutor against Hillary, telling Morning Joe he wants to help her heal


The news is an undramatic but highly expected coda to Trump’s push throughout the campaign to pursue Clinton’s prosecution if elected president. At one debate, he declared that his opponent should be in jail. The talk left many commentators appalled. Some argued that it was more customary to a banana republic than a modern democracy.

But Trump kept at it. His campaign was particularly critical of FBI Director James Comey for declining to recommend pressing charges over the summer. The team then praised him for examining fresh evidence regarding Clinton’s emails with just days to go in the campaign, only to then suggest that the system was rigged when Comey announced he had found nothing new in his review.

Trump’s supporters likely won’t care that he is now backtracking on his pledge to prosecute Clinton. He can do little wrong in their eyes.

One of Trump’s most prominent supporters, radio host Bill Mitchell, saw reason in the move.

But the reaction from Democrats was a mix of gratefulness with the outcome and annoyance that Trump gets to look magnanimous for deciding to not prosecute a case he likely wouldn’t have won.

Trump repeatedly said he'd appoint a special prosecutor for H. Glad he won't pursue, but he lied to his supporters. Knows nothing prosecute

There were also institutional concerns about what it meant that an incoming president and his top aide simply got to determine which cases to pursue.