What Obama Told His Daughters About Trump 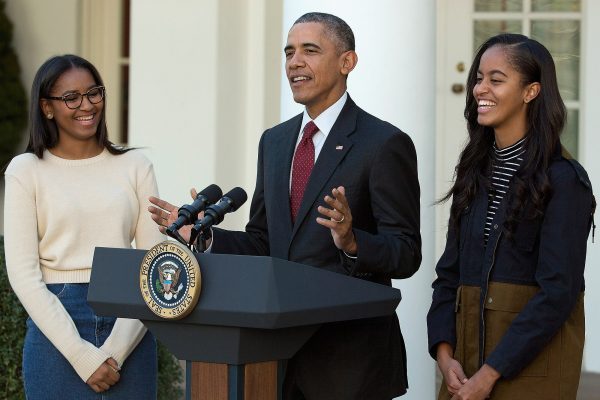 President Barack Obama had wise words for his teenage daughters following the election of Donald Trump and reports that racist incidents and crimes are on the rise.

In a new interview with The New Yorker, the president said he urged daughters Malia, 18, and Sasha, 15, to face bigotry head-on and “constantly affirm and lift up and fight for treating people with kindness and respect and understanding.”

“People are complicated. Societies and cultures are really complicated,” the president recalled telling his daughters. “This is not mathematics; this is biology and chemistry. These are living organisms, and it’s messy. And your job as a citizen and as a decent human being is to constantly affirm and lift up and fight for treating people with kindness and respect and understanding.”

“And you should anticipate that at any given moment there’s going to be flare-ups of bigotry that you may have to confront, or may be inside you and you have to vanquish. And it doesn’t stop. … You don’t get into a fetal position about it. You don’t start worrying about apocalypse. You say, okay where are the places where I can push to keep it moving forward?”

The president has shared a similar messagewith the American public. After Trump’s unexpected victory, he told citizens to “stay encouraged. Don’t get cynical, don’t ever think you can’t make a difference.”

“The path that this country has taken has never been a straight line. We zig and zag and sometimes we move in ways that some people think is forward and others think is moving back, and that’s okay,” he said. “The point though is that we all go forward with a presumption of good faith in our fellow citizens, because that presumption of good faith is essential to a vibrant and functioning democracy.”