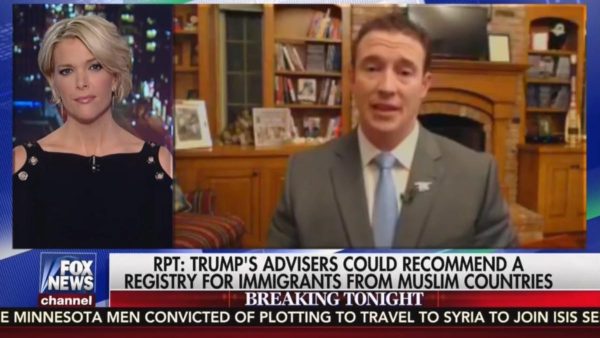 A spokesman for a major super PAC backing Donald Trump said Wednesday that the mass internment of Japanese Americans during World War II was a “precedent” for the president-elect’s plans to create a registry for immigrants from Muslim countries.

During an appearance on Megyn Kelly’s Fox News show, Carl Higbie said a registry proposal being discussed by Trump’s immigration advisers would be legal and would “hold constitutional muster.”

“We’ve done it with Iran back awhile ago. We did it during World War II with the Japanese,” said Higbie, a former Navy SEAL and a spokesman for the pro-Trump Great America PAC.

“Come on, you’re not proposing we go back to the days of internment camps, I hope,” she said.

“I’m not proposing that at all,” Higbie told her. “But I’m just saying there is precedent for it.”


Higbie’s remarks came a day after a key member of Trump’s transition team, Kansas Secretary of State Kris Kobach, said Trump’s policy advisers were weighing whether to send him a formal proposal for a national registry of immigrants and visitors from Muslim countries. Kobach, a possible candidate for attorney general, told Reuters that the team was considering a reinstatement of a similar program he helped design after the Sept. 11, 2001, terrorist attacks while serving in the Justice Department under President George W. Bush.

Known as the National Security Entry-Exit Registration System (NSEERS,) the program required people from “higher risk” countries to submit to fingerprinting, interrogations and, in some cases, parole-like check-ins with authorities. The program was suspended in 2011 after criticism from civil rights groups who said it targeted Muslims.

When an NBC News reporter asked Trump last year whether he would require Muslims to register in a database, he said he “would certainly implement that — absolutely.”

In his appearance on Kelly’s show, Higbie, a frequent political commentator, said noncitizens were not protected by the same constitutional rights as citizens. He said he believed most Muslims were “perfectly good people” but argued that a small percentage of them adhered to an “extreme ideology.”

“And they’re doing harm,” he said. “So we would like to keep tabs on it until we can figure out what’s going on.”

When Higbie invoked Japanese internment camps, Kelly pushed back, at one point cutting him off mid-sentence and raising her voice.

“You can’t be citing Japanese internment camps as precedent for anything the president-elect is going to do,” she told him.

Higbie responded: “Look, the president needs to protect America first, and if that means having people that are not protected under our Constitution have some sort of registry so we can understand — until we can identify the true threat and where it’s coming from, I support it.”

“You get the protections,” Kelly said, “once you come here.”

Beginning in 1942 and ending in 1946, following the Japanese attack on Pearl Harbor, the U.S. government incarcerated as many as 120,000 people of Japanese descent in internment camps throughout the United States. The majority were U.S. citizens. In 1988, President Ronald Reagan signed a law paying $20,000 in reparations to each surviving detainee. He apologized for the mass internment, calling it “a great injustice” in American history.

.@CarlHigbie: “People outside of this country are not protected under the same constitutional rights as we are in America.” #KellyFile

A 1944 Supreme Court decision upholding the internment is widely considered one of the court’s darkest moments, along with the court’s ruling in the Dred Scott case.

Great America PAC was among the first super PACs created to support Trump’s campaign. Formed in February, it has since established itself as one of the president-elect’s biggest allies, spending $30 million on political ads, phone calls, mailers and ground support, as The Washington Post‘s Matea Gold reported last week. Now that Trump has been elected president, the group is looking to help the new administration, tapping its network of a quarter-million donors to provide financial backing for Trump’s legislative agenda, The Post reported.