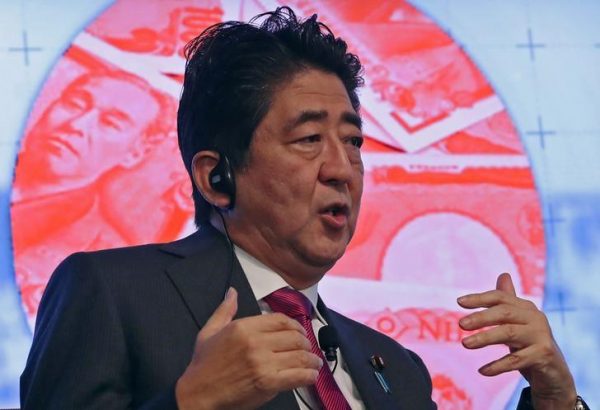 Japanese Prime Minister Shinzo Abe said on Thursday he wants to build a relationship of trust when he meets U.S. President-elect Donald Trump, stressing that the two-way alliance is the core of Tokyo’s diplomacy and security.

Abe, set to meet Trump later on Thursday in New York, is expected to be the first foreign leader to do so since the real estate magnate won a surprise victory in the U.S. election on Nov. 8.

An adviser to Trump, speaking anonymously because he was not authorized to speak to media, said earlier this week the president-elect would seek to reassure Abe and other Asian allies who were rattled by his rhetoric during the election campaign.

However, asked whether the issue of contentious issue of Japanese financial support for U.S. troops based in Japan would be raised, Trump aide Kellyanne Conway told the CBS program “This Morning” on Thursday, “Maybe they’ll discuss that today.”

Trump, a Republican, fanned worries in Tokyo and beyond with his campaign comments on the possibility of Japan acquiring nuclear arms and demands that allies pay more for the upkeep of U.S. forces on their soil or face their possible withdrawal.

Speaking to reporters before leaving Tokyo, Abe called the U.S.-Japan alliance “the cornerstone of Japan’s diplomacy and security. Only when there is trust does an alliance come alive,” Kyodo news agency reported.

Conway said the meeting, scheduled for 5 p.m. EST (2200GMT) at Trump Tower in Manhattan, would be somewhat informal given that Trump does not take over the White House from Democratic U.S. President Barack Obama until Jan. 20.

“We are very sensitive to the fact that President Obama is still in office for the next two months, and we won’t be making diplomatic agreements today,” she told reporters as she entered the building.

Separately, she told CBS: “Any deeper conversations about policy and the relationship between Japan and the United States will have to wait until after the inauguration.”

The Trump adviser who spoke earlier this week said he expected the president-elect to reaffirm “the American commitment to being in the Pacific long term” and that while the question of financial support for U.S. troops might come up, it was unlikely to be a focus.

Conway said Vice President-Elect Mike Pence would also attend the meeting, but there was unlikely to be any media access.

Abe adviser Katsuyuki Kawai told Reuters he had spoken to several Trump advisers and lawmakers since arriving in Washington on Monday to prepare the meeting and had been told “we don’t have to take each word that Mr. Trump said publicly literally”.

“Prime Minister Abe will definitely talk about the importance of the Japan-U.S. alliance and that alliance is not only for Japan and the United States, but also for the entire Indo-Pacific region as well as world politics,” he said.

Japan agreed last December to boost spending for U.S. forces in Japan by 1.4 percent for the next five years, at an average of 189.3 billion yen ($1.74 billion) per year. Defense Minister Tomomi Inada has said Tokyo is paying enough.

Abe has boosted Japan’s overall defense spending since taking office in 2012, while stretching the limits of its pacifist post-war constitution to allow the military to take a bigger global role. Defense spending still stands at just over 1 percent of GDP compared with more than 3 percent in the United States.

Some of Trump’s campaign rhetoric suggested an image of Japan forged in the 1980s, when Tokyo was seen by many in the United States as a threat to jobs and a free-rider on defense.

The Trump adviser who spoke earlier in the week stressed a more positive view.

“Frankly, the prime minister has been more assertive and forthright in trying to make those changes to Japan’s global posture,” he said. “I think he’s going to get a very receptive audience there.”

Some diplomats say that until Trump makes key appointments, it will be hard to assess his policies on foreign relations issues ranging from overseas deployments of U.S. troops, China’s maritime aggressiveness in Asia and the nuclear threat posed by North Korea.

Abe, a political blue blood and veteran lawmaker, and Trump, a brash outsider with no diplomatic or government experience, have sharp differences on policy issues such as free trade.

Trump’s election has dashed hopes for U.S. approval of 12-nation trade pact, the Trans-Pacific Partnership, a linchpin of Obama’s “pivot” to Asia and a pillar of Abe’s economic reforms.