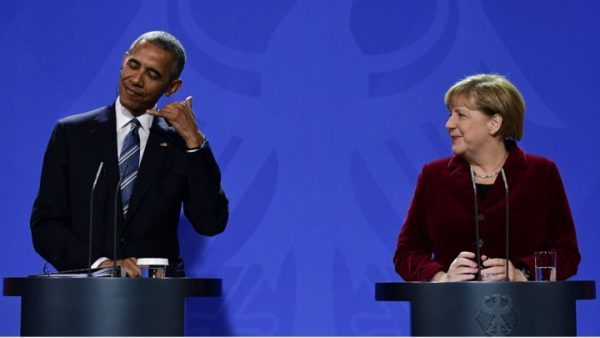 US President Barack Obama and German Chancellor Angela Merkel speak during a joint news conference in Berlin on November 17, 2016.AFP
Share:
US President Barack Obama paid a farewell visit on Thursday to German Chancellor Angela Merkel, seen by some as the new standard bearer of liberal democracy since the election of Donald Trump.

On the last leg of his final European tour as president, Obama aimed to ease fears about the future of the transatlantic partnership and thank Merkel for her friendship during his two terms, White House officials said.

During the leaders’ joint press conference Thursday afternoon, Obama praised his German counterpart, lauding Merkel’s “integrity, her truthfulness, her thoughtfulness”, even as he acknowledged that they had not always been on the same page on every issue.

“All I can say is that Chancellor Merkel has been an outstanding partner, and Chancellor Merkel is perhaps the only leader left among our closest allies that was there when I arrived,” he said after talks with the German leader.

“Her commitment to looking out for the interests of the German people first, but recognising that part of good leadership on behalf of the nation requires engaging the world as a whole… I think she’s been outstanding.”

In a ringing endorsement of Merkel before she announces whether she will stand for a fourth term in next year’s elections, Obama said: “It’s up to her whether she wants to stand again… but if I were here and I were German and I had a vote, I might support her.”

"I want to thank the German people, I want to thank Chancellor Merkel, for your deep friendship and your steadfast partnership" —@POTUS pic.twitter.com/xNW8TKoVjW


Earlier, in a joint article to coincide with his arrival in Germany, Obama and Merkel together appealed for ongoing cooperation on the basis of shared principles to fight climate change, ensure collective defence within NATO and promote free trade.

“These values of democracy, justice and freedom form the foundation of our successful economies,” they wrote in business magazine Wirtschaftswoche.

“We owe it to our industries and our peoples – indeed, to the global community – to broaden and deepen our cooperation,” they said, in a swat at the “America First” rhetoric favoured by Trump.

No deal… for now

Merkel admitted during Thursday’s news conference that a trade deal between the European Union and United States would not be concluded now, after the election of Trump, who opposes the planned accord.

“I have always been strongly engaged for a conclusion of a trade deal with the United States. We have made a lot of progress on the negotiations, but it will not be concluded now,” she said following talks with Obama.

“I am sure that one day we can come back to it,” she added.

Editorial cartoon in Germany as #Obama pays his last visit to Berlin as president. #Merkel pic.twitter.com/1YDF65xy15

But in an extraordinary break with tradition for Germany, which long saw the US as its protector and closest ally, Merkel pointedly said cooperation must be based on shared democratic principles and respect for human dignity.

Analysts said the meeting could be seen as a kind of passing of the torch from Obama to Merkel, who the outgoing president has called “probably… my closest international partner”.

In an interview with German public broadcaster ARD and news magazine Der Spiegel, Obama said Merkel had served her country well in the 11 turbulent years she has been in power.

“She has great credibility and she is willing to fight for her values,” he said on his sixth trip to Germany as president.

“I am glad that she is there. I think the German people should appreciate her. Certainly I have appreciated her as a partner.”

Obama dined with Merkel at his hotel late Wednesday, held talks with her on Thursday and will attend a summit Friday in Berlin that will also include the leaders of Britain, France, Italy and Spain.

He has relied on Merkel’s strength in Europe on several fronts including helping to defuse the Ukraine conflict and taking in hundreds of thousands of Syrian refugees.

Addressing a matter of particular concern to Europeans on Thursday, Obama said he hoped Trump could stand up to Russia when needed and that he would take a constructive approach to cooperating with Moscow where interests aligned.

“In order for us to solve many big problems around the world, it is in our interest to work with Russia,” Obama said during the joint press conference.

He added it was important for sanctions imposed against Russia over its actions in eastern Ukraine to remain in place until Moscow complied with the Minsk peace agreement.

As Obama exits the stage, many observers say Merkel’s importance as a defender of Western values will only continue to grow, assuming that, as expected, she does run for a fourth term next year.

Obama held the biggest rally of his 2008 campaign in Berlin, using the once-divided city’s rebirth as a symbol of progress as he made a hopeful call for a world without nuclear weapons to 200,000 cheering fans at the Victory Column monument at sunset.

He and Merkel, who took power in 2005, soon developed a strong partnership, despite rifts over revelations of NSA spying on Merkel’s mobile phone and Obama’s vocal opposition to Germany’s austerity-driven response to the European debt crisis.

Germans at the Victory Column on a grey November day said they were sad to see him go and anxious about what the Trump administration would bring.

“We were so hopeful after George W. Bush left office,” said Thomas Schmidt, 54, a business clerk who recalled being “thrilled” when he watched Obama’s Berlin speech on television.

“It was a euphoric mood, a little bit like when the Berlin Wall fell. The feeling now with Trump is much more wary. No one knows what he might do.”

Two out of three Germans now say they fear ties with Washington will suffer under the new administration, according to a poll last week for public broadcaster ZDF.

For his part, Obama pledged to return to Germany, for pleasure if not for business.

“It’s wonderful to be back in Berlin. This is my sixth visit to Germany, it will not be my last,” Obama told the joint news conference with Merkel.

“I have somehow continued to miss Oktoberfest so that’s probably something that is better for me to do as a former president rather than as president. I’ll have more fun,” he said, referring to Munich’s annual beer-swigging festival, which sees 7.5 million litres of beer consumed by locals and tourists alike, many decked out in traditional lederhosen and dirndls.