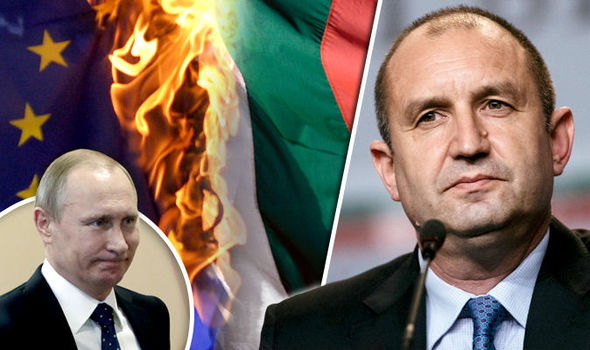 Vladimir Putin and former General Rumen Radev who was elected as president of Bulgaria on Sunday
Share:
Pro-Russian candidates appeared to have won presidential elections in Moldova and Bulgaria on Sunday, giving Moscow new allies in its efforts to regain influence in parts of Eastern Europe it regards as its backyard. One force likely to emerge bruised from the two votes: the European Union.

In the former Soviet republic of Moldova, Socialist party candidate Igor Dodon won 55.5% of the vote, according to preliminary results from Moldova’s electoral commission, beating his pro-European Union rival, Maia Sandu, in a second-round runoff.

In Bulgaria, Socialist-backed Rumen Radev secured 58.1% of the vote, according to an exit poll by Alpha Research released on national television, seeing off the center-right government’s favored candidate, Tsetska Tsacheva. Prime Minister Boiko Borisov said he would resign, possibly opening the way for a snap election in the European Union’s poorest member state.

The results are a shot in the arm for those in Moldova and Bulgaria who want to see their states warm up relations with their large Eastern neighbor, reversing years of westward drift they say has yielded too few rewards.