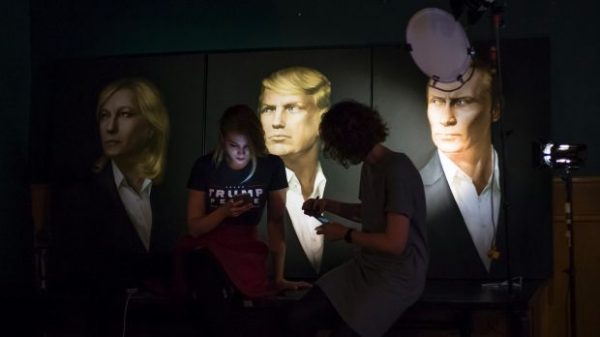 Marine Le Pen, the far-right French leader hopeful of a strong showing in next year’s presidential election, has defended borrowing from a Russian bank to fund her party – and promised closer ties between the Elysee Palace and the Kremlin if she wins next May.

There are growing fears of Russian interference in the vote, after Donald Trump’s relationship with the Kremlin and Russia’s alleged role in hacking the Democratic party’s email server were hot topics in the US election.

Foreign policy experts told Fairfax that Russia would benefit from “chaos” in Europe and a weakened NATO and EU, and it was not clear how far it would go to exploit the opportunities offered by next year’s presidential elections in France.

“I’m sorry, but I borrowed from a Russian bank, but it might as well have been a bank from Guatemala or from Spain,” she said. “French banks won’t lend to the National Front, it’s a way they have found to stifle democracy.”

But she said her presidency would feature a new friendship with Vladimir Putin – and hinted at an end to economic sanctions initiated after Russia took Crimea from Ukraine.

“There is no reason to be scared,” she said. “If we want a powerful Europe we had better negotiate with Russia and cooperate with them, have commercial agreements with them.”

She was in favour of a “multi-polar world” without a wall between Europe and Russia.

“The model defended by Vladimir Putin, which is reasoned protectionism, looking after the interests of his own country is one that I like,” she said.

Le Pen’s anti-EU, anti-immigration party won more than a quarter of the vote in last year’s regional elections, and she is likely to reach the second round presidential run-off in May.

Voters from the two mainstream parties are expected to unite against her. However she is predicting a Brexit, Trump-style upset win.

Mr Trump’s victory was “a new stone in the building of a new world destined to replace the old one”, Ms Le Pen said, drawing parallels with Brexit and the rise of European “patriotic” nationalism.

Mr Trump had “made possible what was previously thought impossible – the victory of the people against the elite”.

And there was a “very sinister Russian connection” within the Front Nationale, he said.

“They’ve been financing her and that’s unpalatable… Russia today is a country that questions the basic values which are ours, our Western values, human rights, rule of law, the liberal values.

“(Russia) trying to find allies inside the European Union, starting with (Hungary’s) Orban, Marine Le Pen and rejoicing at Brexit etc are things that are very serious.

“Weakening the EU is clearly something they hope to achieve by splitting it. Marine Le Pen’s position of leaving the Union, renouncing the euro is something they support.”

Mr Nyberg said “your guess is my guess” as to whether Russia – or Russian hackers – might try to influence the French election.

E Wayne Merry, a senior fellow at the America Foreign Policy Council, wrote recently that “Moscow considers American outrage about foreign involvement in this election as pure hypocrisy”, given America’s overt influence on other countries such as Egypt and Ukraine, and its pursuit of regime change in Serbia, Iraq, Libya and Syria.

“It’s not because there’s an ideological affinity necessarily, it’s because the Russians want chaos,” he said. “It means division, the West is less likely to stand up to Russia’s behaviour in eastern Europe.”

The alleged role of Russian hackers in the US election showed that “we’re facing a whole range of weird and wonderful simultaneous threats from unexpected angles”, he said.

He would not rule out a similar hack in France.

“I don’t know enough about Russian intentions to know whether it’s a high level of probability but on the basis of the evidence we have it seems to be that it’s entirely plausible that the Russians would try that,” he said.

“It’s a whole new world of politics we’re in at the moment. It’s trans-national, it’s technological, it’s quite scary in that way but I think there will be more and more of it happening.

“People are going to have to be more and more careful what they do on electronic media now.”

“We can come out with all the usual tropes that ‘you can’t trust the polls and they’ve been wrong before’ but I just think the institutional hurdles in France are significantly higher than they are in the US,” he said.

If Nicolas Sarkozy was the candidate of the centre-right Republican party Le Pen’s chances would “go shooting up”, he said, because the left would find it very hard to put a cross next to Sarkozy’s name.