Turkey issues warning over travel to U.S. after Trump protests 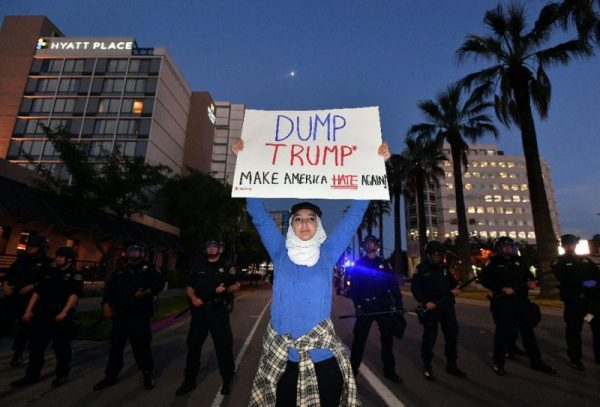 A Protester holdS up a sign that reads Dump Trump during a march and rally against the election of Republican Donald Trump as President of the United States in Los Angeles, California, U.S. November 12, 2016. REUTERS/Lucy Nicholson
Share:

Turkey warned its citizens about travel to the United States on Saturday in response to what the foreign ministry called increasingly violent protests against President-elect Donald Trump.

“Within the context of risks caused by the incidents and of social tension, our citizens who live in the U.S., or who are considering traveling there, should be cautious,” the ministry said in a statement.

Demonstrators planned to gather again on Saturday in U.S. cities nationwide to protest against Trump, whose election they say poses a threat to their civil and human rights, a day after a protester was shot in Portland, Oregon.

There has been growing tension between the two NATO allies after repeated calls from Turkey to extradite U.S.-based cleric Fethullah Gulen, who Ankara blames for a failed coup in July.

Turkish Prime Minister Binali Yildirim said on Wednesday he hoped for an improvement in bilateral ties after Trump’s victory, and again called for Gulen’s extradition.