Almost 50,000 people came together in the Lebanese capital city Sunday morning to participate in the annual “Beirut Marathon”, a charitable and sporting event, which draws people from across the country and around the world.

The marathon started at around 7 a.m. and included 11 different races for adults, women, special needs individuals, students and children accompanied by their parents.

Hariri said a marathon was also taking place in the formation of the government, whereby parties are competing for ministries.

“Lebanon is doing very well, especially following the election of President Michel Aoun, who has reflected a sense of comfort for everyone,” Hariri said.

He added that “we are looking towards the future and Lebanon is doing well.”

For her part, “Beirut Marathon Association” President May Khalil told reporters that “we salute Prime Minister Hariri and we emphasize that we have full confidence that the government will be formed because Lebanon needs a period of security. We are very happy that Premier Hariri is leading this stage.”

One of the most challenging races is the internationally measured and certified 42 kilometer race, which begins from the Beirut New Waterfront and ends at Martyrs’ Square in Downtown Beirut and spans various neighborhoods in and around the Lebanese capital.

Shereen Njeim was the first Lebanese woman in the 42 kilometer race, coming in fourth place in the total ranking. 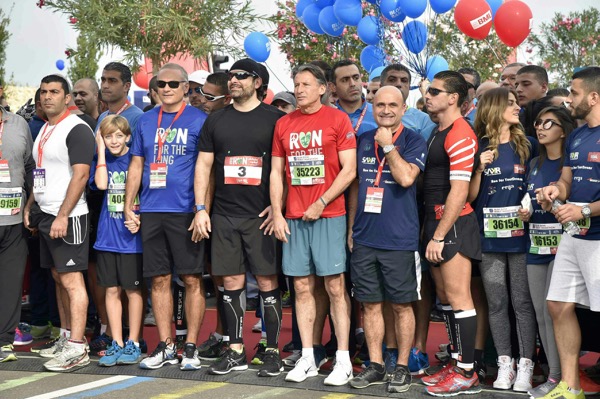 Refreshment stands, paramedics and police were on standby along the whole route. Different companies, organizations, universities and other institutions were represented with runners at the long race, setting up their own stands and cheering on the participants.

“Despite all the economic and social challenges we are facing in Lebanon, these sorts of activities give us hope that Lebanon is doing well,” one Lebanese racer told reporters.

Road closures and diversions have caused heavy traffic in some areas of the city.