What will be the impact of the Trump presidency on women’s rights? Expert views 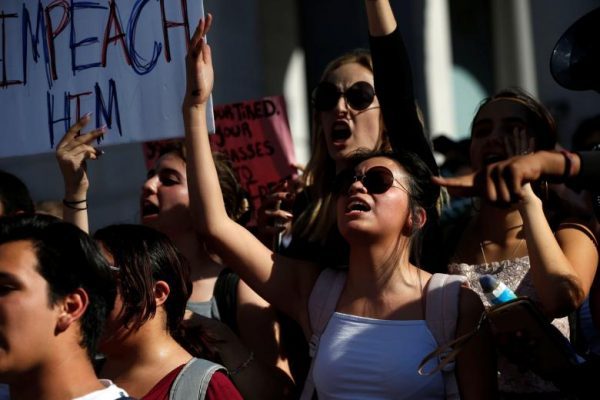 Women hold signs as they protest the election of Republican Donald Trump as the president of the United States outside of City Hall in Los Angeles, California, U.S. November 9, 2016. REUTERS/Patrick T. Fallon
Share:
By Ellen Wulfhorst
The election of Donald Trump as the next U.S. president raises questions about how his administration will affect women’s rights, abortion and gender equality, experts say.

During his campaign, Republican Trump was criticized for his views on women. On tape, he was heard talking about grabbing women by their genitalia, and he insulted female reporters and a female political rival over their looks.

Here are some expert views on what lies ahead:

“We have fought these kinds of dangerous threats before – and won. We will again.”

“Donald Trump’s vision for America and the policies he has proposed are a clear and present danger to women, our bodies, and our freedoms. Our charge every day is to work to ensure President-elect Trump cannot strip away our freedoms, our rights, and our ability to chart our own destiny.

We know the fight for our values isn’t won or lost in a single election … seven in 10 Americans believe in legal abortion, and we’ll continue to be their voice and advocates.”

“Our nation has just elected a man who has notoriously groped, belittled, and disparaged women. Our compatriots chose him over the opportunity to inaugurate our first woman president. The Trump presidency will thus begin in a climate that feels misogynistic and hostile to gender equality.

“Candidate Trump did support six weeks of paid maternity leave for new mothers. This would be a step towards economic justice for women. It could open a path toward paid leave for parents of all genders, which is what true gender equality requires. Trump said: ‘Nobody respects women more than I do.’ If he delivers on paid maternity leave, we might start to believe him.

“We always knew racism, sexism, xenophobia, ableism, and other forms of hate were on the ballot … The destructive nature of this cultural and political moment is undeniable and heart-breaking.

“We know that the fight for reproductive justice is more than access to abortion. Our struggle must ensure that people across the nation, and around the world, are able to raise their children without fear of violence.”

“…the United States elected a president who suggested during the campaign that women who have abortions should be punished. We also elected as vice president the current governor of Indiana, a state where Purvi Patel was arrested, tried, and convicted of feticide for attempting to have an abortion. Fortunately, that conviction was recently overturned, but only after Ms. Patel was incarcerated for more than a year.

“We hope that our country will reject punishment and instead come together to ensure the health and human rights of all people, including pregnant women.”

“Watching our country choose an inexperienced, unprepared man who incites sexism and racism over a deeply qualified and highly prepared woman, has been a painful shock for me. I am committed to not letting disillusionment sent in.

“As a dear friend and NOW colleague said to our team today: the grief you feel today is a direct reflection of the goodness that is in your heart, of the fact that you reject sexism, bigotry, intolerance and hate and you embrace inclusivity, integrity and empathy. All those who hold those values have just been dealt a blow.

“History has faced even darker moments than this, and good people have rallied to turn things back in the right direction. We will do that.”

“We will never back down and we will never stop fighting to ensure that Planned Parenthood patients have access to the care they need, people who come from communities that need our continued support in this new reality – immigrants, people of color, the LGBTQ community, people of faith, and more.

“Since 1993, Women for Women International has helped more than 447,000 marginalized women in countries affected by war and conflict … to move from crisis and poverty to stability and economic self-sufficiency.

“We connect people across cultures to increase understanding and common ground. The elections brought forth fear of ‘the other’ and our work strives to build bridges and common understanding. Whereas Hillary Clinton has been a champion of women’s rights since Beijing, we look forward to learning more about the Trump administration’s plans to assist the most vulnerable women in line with the U.N. Sustainable Development Goals.”

“We are fortified by the knowledge that for the first time in history tens of millions of Americans could – and did – vote for a woman presidential candidate from a major political party, that girls and boys could see a powerful woman have a real chance of becoming president, and that because of this breakthrough, we will see a woman occupy the highest office in the land one day.”