Syria: Rebels concerned over Trump’s victory, while the Assad regime is cautiously optimistic 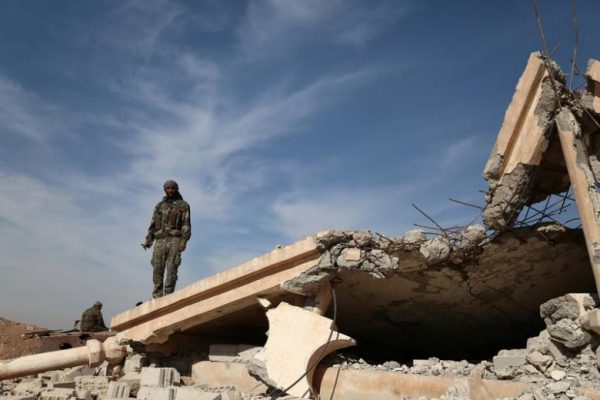 An Syrian Democratic Forces (SDF) fighter stands with his weapon on the rubble of a destroyed building, north of Raqqa city, Syria. REUTERS/Rodi Said
Share:

Donald Trump’s election as U.S. president on Wednesday aroused concern among Syrian rebels and a degree of optimism in Damascus, where his victory was seen as a better outcome than a Hillary Clinton win.

Syrian rebels have long been fiercely critical of what they perceive as the Barack Obama administration’s inadequate backing for their fight against President Bashar al-Assad, though Washington has been an important sponsor of the uprising.

While some in the Syrian opposition said Trump had yet to articulate a clear Syria policy, his statements, and his more open-minded stance toward Assad’s ally Russia, have fueled rebel concern about the stance he may adopt on the war, in which Russia’s air force has been bombing insurgents.

“I think things will become difficult because of Trump’s statements and his relationship with Putin and Russia. I imagine this is not good for the Syrian issue,” Zakaria Malahifji, head of the political office of an Aleppo-based rebel group, told Reuters.

Trump said in an Oct. 25 interview with Reuters that defeating Islamic State was a higher priority than persuading Assad to step down, and warned that Clinton could drag the United States into a new world war over the Syria conflict.

In one of his debates with Clinton, Trump said he did “not like Assad at all, but Assad is killing ISIS” with Russia and Iran.

The Syrian civil war, now in its sixth year, has killed hundreds of thousands of people, allowed the rise of Islamic State and created the world’s worst refugee crisis.

Russia’s intervention in support of Assad last year helped Damascus turn the tide against insurgents who had been making steady territorial advances, and gave Moscow decisive influence over diplomacy.

The Syrian opposition says Obama failed to back them adequately after calling for Assad to leave power, failing to enforce his own “red line” against the use of chemical weapons and blocking the delivery of anti-aircraft weapons to rebels.

He said Gulf Arab states – which have backed the Syrian rebellion – had been depending on a Clinton victory and were now in “a predicament”. “The American administration must carry out what it said in the election campaign.”

Georges Janbour, the Damascus-based head of the Syrian Association of Political Science, noted Trump’s previous suggestion that Russia could be a valuable ally in the fight against Islamic Sate. “I hope that he continues in this line of thinking,” he told Reuters.

Clinton was the U.S. secretary of state when the uprising against Assad began in 2011, during a wave of protests against Arab autocrats known as the Arab Spring.

Prominent Syrian opposition politician George Sabra said: “We do not expect much from the new American administration, but we hope that the face of President Donald Trump is totally different to the face of Mr. Donald Trump the candidate.”

While some in the opposition expressed concern about Trump’s statements, others said a more isolationist approach from Trump could be a good thing for the rebellion by allowing regional powers such as Saudi Arabia to act free of U.S. constraints.

“All we can say is he has called for good relations with Russia,” she told Reuters. “On Syria he will have to make difficult decisions. Cooperation with Russia over the last year and a half has not worked … considerations should be towards a different policy,” she said.

Some rebels believe that Trump will make no difference to long-established American policy.

“The Americans were never honest with us. They left us in a quagmire that drowned the Syrians … Everyone is trading with our blood and suffering,” said Abu Hamed, head of the military council of rebel group Liwa al Haq Brigade, speaking from Hama.