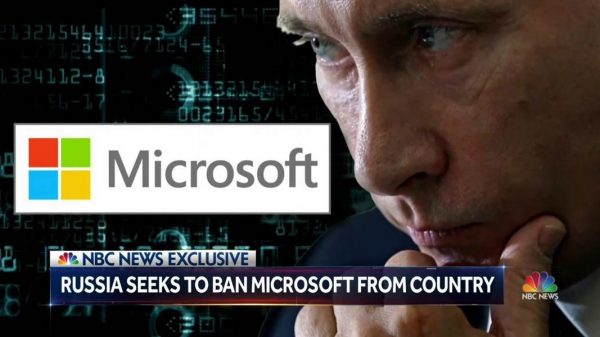 In his battle with the United States, Vladimir Putin has a new target — Microsoft, wants to push it out of Russia
Share:

In his battle with the United States, Vladimir Putin has a new target — Microsoft.

The Kremlin is backing a plan to rid government offices and state-controlled companies of all foreign software, starting with Moscow city government replacing Microsoft products with Russian ones, according to a senior U.S. intelligence official.

The Russians have also moved toward blocking LinkedIn, the U.S.-based networking site that Microsoft is in the process of buying. The company is appealing an injunction, with a decision expected Nov. 10.

The intelligence official said Putin is going after Microsoft because it is the biggest American name in information technology and because it’s easy to convince Russians that the company works with the U.S. intelligence community.

Russia is also bracing for the U.S. to retaliate for months of hacking attacks that Washington says were authorized by Putin and designed to influence the American electoral process.

“They are obviously stepping up their game,” Fiona Hill, a senior fellow at the Brookings Institution.

“It is a signal that the Russians really mean business now about nationalizing the internet and making sure they can create their own secure content.”

Microsoft told NBC News it doesn’t collaborate with the government on any spying.

“We don’t spy on anyone. We don’t work with any government to spy on others, and we never would,” said Dominic Carr, Microsoft’s general manager for public affairs.

“We make sure governments can review our software to confirm for themselves that our products are secure. And we’ve worked hard to increase privacy protections for customers including by suing the US government four times.”

But the Russians are keenly aware that Microsoft products, like any software, can be used as weapons in cyber-warfare. A sensitive U.S. Homeland Security document obtained by NBC News confirms that a Microsoft Office attachment was used by Russian hackers to shut down the Ukraine electrical grid last year.

Rep. Adam Schiff, the ranking Democrat on the House Intelligence Committee, said he’s not surprised Russia is singling out Microsoft since Russia’s relationship with the U.S. is at “the lowest ebb since the end of the Cold War.”

“Putin as an old KGB officer views the world as a zero-sum game between Russia and the U.S.,” he said. “Whatever is good for the U.S. is bad for Russia and vice versa.”

The move against Microsoft “may also be a way for Russia to signal to its own population we can’t trust American technology — and once again feed into Russian hostility and paranoia towards America and its products,” Schiff said.

“So as part economic message, part a shot across the bow, part attack on American IT, part protectionism … all, I think, very consistent with the kind of escalation we are seeing from Putin.”

If the goal is to deal an economic blow to Microsoft, Putin’s campaign doesn’t appear to be having much of an effect. The company’s stock hit $60 a share on Oct. 21 — an all-time high. U.S. intelligence officials also believe that any attempt to ban Microsoft will be limited because its products are too integrated into Russia’s IT infrastructure.