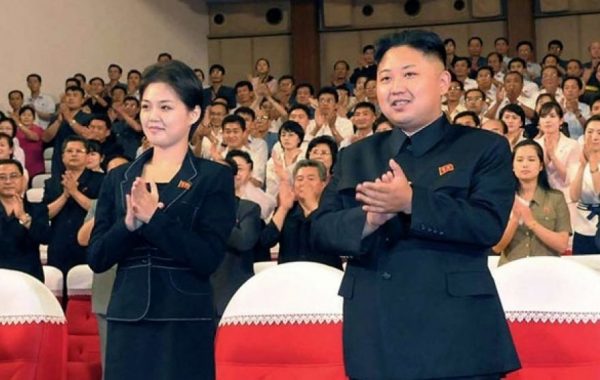 North Korean dictator Kim Jong-Un and his wife Ri Sol-Ju in 2012
Share:
Fears are growing for the safety of North Korea’s first lady who has vanished from public view for the past seven months.

Ri Sol-ju is thought to have tied the knot with her food-loving fella Kim Jong-un in 2009 and soon after she gave birth to his child and heir to the hermit state.

Sporting designer clothes and pricey handbags, she has since appeared alongside her ever hubby as he tours factories and theme parks.

But now the slim and attractive spouse has vanished from public view after last being seen at a sporting event in March.

North Korea observers fear she could have fallen foul of her despotic husband or incurred the wrath of his equally menacing sister, Kim Yo jong.

Experts believe Yo jong is the power behind the throne and is even more deadly than her brother.

One North Korea watcher told Yonhap News Agency said: “Ri showed up at public events every two months last year but has not appeared in public for over seven months this year.

“Some sources speculate Ri’s disappearance may be linked to a check on her activities by Kim’s younger sister Kim Yo-jong.”

Concern is also mounting for Kim’s wife because of the gruesome fate people face who cross the loony leader.

In August it emerged he had executed one of North Korea’s top officials with an anti-aircraft gun after the man fell asleep in one of his meeting meeting.

In December 2013, North Korean state media announced the execution of Jang Sung-taek, the uncle by marriage of Kim Jong-Un.

According to a South Korean newspaper, Jang’s nephew, O Sang-hon, was also executed by being burnt alive with a flame thrower.

In 2007, a factory chief convicted of making international phone calls was executed by firing squad in front of a crowd of 150,000.

It’s reported that six people were killed in the rush as spectators left the stadium which hosted the execution.