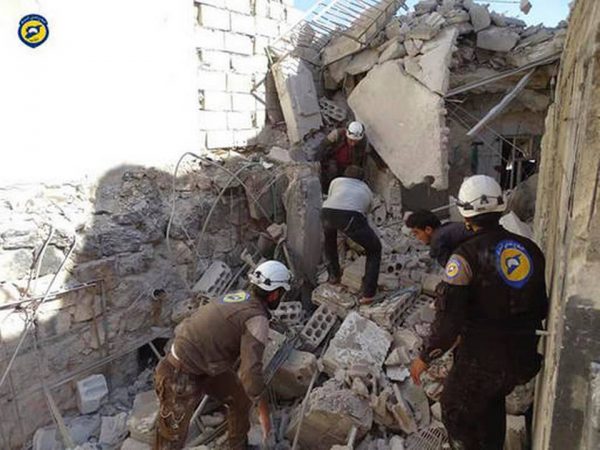 In this photo provided by the Syrian Civil Defense group known as the White Helmets, Syrian Civil Defense workers search through the rubble after airstrikes in the village of Hass in the Idlib province, Syria, Wednesday, Oct. 26, 2016. Syrian activists say that airstrikes outside a school in the northern, rebel-held province of Idlib have killed more than a dozen people, mostly children. The Idlib News network says the airstrikes hit as the children gathered outside a school complex in the village of Hass. Syrian Civil Defense
Share:
BEIRUT (AP) — Airstrikes in Syria killed 17 people, mostly children on Wednesday when warplanes struck a school complex in the northern rebel-held province of Idlib, activists said.

The Idlib News network said the strikes hit as the children were gathered outside the school complex in the village of Hass. The activist-operated group put the death toll at 17, and said most of the victims were children.

There were fears the death toll could rise further as some of the wounded were reported to be in critical condition, the network added. Another activist group, the Britain-based Syrian Observatory for Human Rights put the death toll at 22. It said 14 children and a woman were among those killed.

Idlib is the main Syrian opposition stronghold, though radical groups also have a large presence there. It has regularly been hit by Syrian and Russian warplanes as well as the U.S.-led coalition targeting Islamic State militants.

Footage posted by activists on line shows a huge plume of smoke rising from the area of the strikes. Rescuers are seen rushing casualties away along a dusty road lined with destroyed buildings.

A woman’s body is seen being carried on a stretcher while other bodies, covered in cloth and one with only a hat, are lying under shrubs in what could possibly have been a garden among the buildings. Other casualties are seen being ferried in pick-up trucks.

An activist at the scene, Muaz al-Shami, says as many as 10 airstrikes are believed to have hit the residential area.

“I don’t want to go to school anymore,” a young girl says, weeping.

Earlier in the day, the northern Aleppo province saw a new escalation as a helicopter believed to belong to Syrian government forces dropped barrel bombs in a deadly attack on Turkey-backed opposition forces in the border area, Turkish officials said. A statement attributed to the field commander of Syria’s pro-government troops said any Turkish advances in northern Syria under the pretext of fighting IS militants would be dealt with “forcefully and appropriately.”

The barrel bombing was said to have occurred in the village of Tal Madiq, in a part of northern Aleppo where rival groups have been operating, mostly to rout Islamic State militants.

If confirmed, the attack would be the first by Syrian government forces on the Turkish-backed fighters. Turkey’s state-run news agency didn’t say when the attack happened and said at least two Syrian opposition fighters were killed and five others wounded. A Syrian opposition spokesman said it took place Tuesday.

The Observatory’s chief, Rami Abdurrahman, said helicopters struck as intense clashes were underway between Kurdish-led fighters and Turkey-backed forces in Tal Madiq and that 11 Syrian opposition fighters and five Kurdish fighters were killed.

The Kurdish-led forces are now in control of the village, about 10 miles from the highly prized IS-controlled al-Bab town. A senior Kurdish commander, however, denied Syrian government bombings of the Turkey-backed fighters, saying it was an attempted explanation for battlefield losses.

“They are trying to find a pretext for the loss. No aircraft were involved,” Mahmoud Barkhadan of the main Syria Kurdish militia, the People’s Protection Units, told The Associated Press by telephone from the region.

A spokesman for the Syrian fighting group Nour el-Din el-Zinki Yasser al-Youssef said the Kurdish-led forces attacked them while they were fighting IS militants in the area. Then Syrian government helicopters followed, he said in a message.

The complex terrain is a powder keg where confrontation among rival groups can break out anytime: U.S.-backed Syrian Kurdish fighters, Turkey-backed Syrian rebels and Turkey. Ankara sent tanks, troops and aircraft into northern Syria in August in an unprecedented incursion that it said was part of efforts to help Syrian opposition clear the border area of Islamic State fighters.

But Ankara is also seeking to contain the U.S.-backed Syrian Kurdish forces fighting the Islamic State group, putting it at odds with its key ally, the United States. Ankara sees Kurdish fighters in Syria as an extension of its outlawed Kurdish militants and designated as a terrorist organization.

Syria’s military threatened last week it would shoot down any Turkish warplane that enters Syrian air space, after Turkish jets raided villages in northern Syria in an escalation of Ankara’s offensive against Kurdish fighters.

On Wednesday, a statement attributed to the field commander of pro-government troops said Turkish advance under the pretext of fighting IS in northern and eastern Aleppo is an encroachment on the Syrian government’s area of operations and would not be tolerated.

The fall of the town of al-Bab to Turkey-backed rebels would threaten the government’s siege on the rebels in the city of Aleppo, to the west.

Meanwhile, Turkish Foreign Minister Mevlut Cavusoglu told reporters on Wednesday that Turkey is determined to push ahead with the offensive in northern Syria – dubbed Operation Eurphrates Shield – and liberate the key town of al-Bab from IS militants. It would not be deterred by the bombing of Tal Madiq, he said.