The Cold War is back: Russians conduct Nuclear-Bomb survival drills 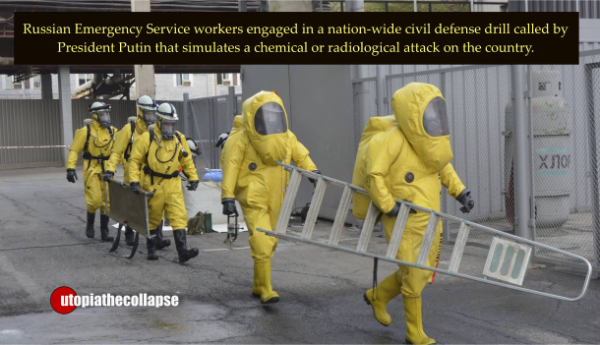 As the world drifts toward an uncertain abyss: fears escalate that a global conflict involving Russia is about to begin.

Moscow – Russian authorities have stepped up nuclear-war survival measures amid a showdown with Washington, dusting off Soviet-era civil-defense plans and upgrading bomb shelters in the biggest cities.

At the Kremlin’s Ministry of Emergency Situations, the Cold War is back.

The country recently held its biggest civil defense drills since the collapse of the U.S.S.R., with what officials said were 40 million people rehearsing a response to chemical and nuclear threats.

The country recently held its biggest civil defense drills since the collapse of the U.S.S.R., with what officials said were 40 million people rehearsing a response to chemical and nuclear threats.

Videos of emergency workers deployed in hazmat suits or checking the ventilation in bomb shelters were prominently aired on television when the four days of drills were held across the country. Students tried on gas masks and placed dummies on stretchers in school auditoriums.

The capital’s civil-defense plans are also being upgraded, said Andrey Mishchenko, deputy head of the ministry. “An inventory was taken in Moscow of the city’s underground spaces, in order to allow us to plan for sheltering 100% of the city’s population,” he said, as reported by state news agency RIA Novosti. In parallel, commentators on state-dominated airwaves issued some of the shrillest anti-American rhetoric in years. “Russia is sick of America’s arrogant lies,” influential commentator Dmitry Kiselyov said this month after a Syrian peace plan collapsed.

After a mistaken strike by U.S.-led coalition warplanes on Syrian troops in September, Russia’s Defense Ministry warned that its air defense systems could shoot down any American plane that threatened its own forces. And when a Russian tabloid wrote that government officials had been asked to take their children back from the prestigious preparatory schools and universities they attend in Britain, France and the U.S., speculation swirled about preparation for all-out war with the U.S.

The rhetoric reinforces Russians’ idea that their country is a superpower on par with the U.S. It also offers a distraction from an economic recession and from President Vladimir Putin’s approval ratings, which have dipped from recent highs. The threat of nuclear war also keeps the population pliant and uncritical, said Lev Gudkov, head of the Russian polling group Levada-Center. “Most people believe that the Third World War has begun, but right now we are still in the cold phase of the war, which may or may not turn into a hot war,” he said. “And during war, you have to support your country’s authorities.”