Aoun meets Nasrallah, thanks him for facilitating the presidential issue 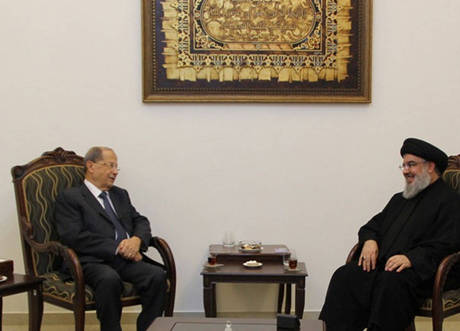 “We are here today to extend our gratitude to Sayyed Nasrallah for helping us resolve the deadlock that hampered the election of a president,” said Aoun after the meeting in a  possible reference to the obstruction of the presidential issue  for over 2 years by the Iranian-backed party

On Sunday, Nasrallah had renewed in a speech his support for Aoun’s nomination for the top state post, he said: “Our commitment to General Michel Aoun’s nomination is final. The Loyalty to the Resistance bloc will attend the session and all the members will vote for General Aoun.”

Speaker Nabih Berri, who has openly declared his opposition to the election of Aoun, has pledged that his bloc will take part in the October 31 electoral session and that he will not try to strip the meeting of its quorum.

Berri’s aides have accused Aoun and former PM Saad Hariri of striking a “bilateral” agreement that would marginalize Shiites in power, allegations that Aoun and his movement have denied.

Berri a key ally of Hezbollah postponed the election to October 31st.