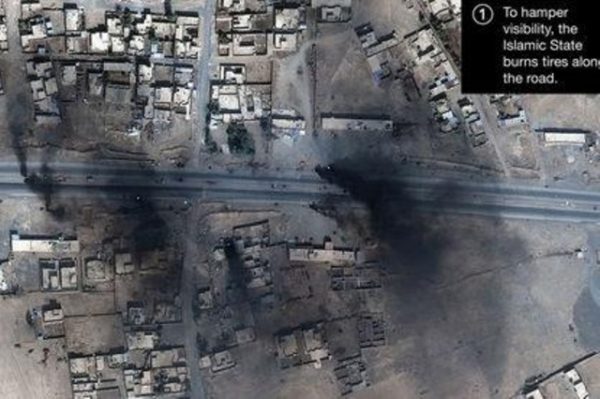 Smoke is seen in this satellite image of the city of Mosul in Iraq on October 18, 2016. Courtesy of Stratfor.com/AllSource Analysis/DigitalGlobe/Handout via REUTERS
Share:

The Popular Mobilization Force (PMF), a coalition of mostly Iranian-trained Shi’ite militias, said late on Tuesday it would back government forces advancing towards Tal Afar, about 55 km west of Mosul.

The PMF includes thousands of battle-hardened fighters with powerful political allies in Baghdad. They have been accused of carrying out killings and kidnappings in other areas freed from Islamic State, although they deny such abuse is pervasive.

Iraqi officials want to keep them off the main battlefields in Mosul to avoid alarming Sunni Muslim residents.

Taking Tal Afar would in effect cut off the escape route for militants wanting to head into neighboring Syria and would please the Iran-backed army of Syrian President Bashar al-Assad, which accuses the U.S.-led anti-Islamic State coalition of planning to allow the jihadists such a safe passage.

But it could also hamper the escape of civilians from Mosul, who must be persuaded that it is safe to leave.

Washington is keen to limit the Shi’ite militias’ role. The U.S.-led military coalition providing air and ground support for the Mosul offensive said it would not assist PMF units.

“As far as the Shi’ite PMF, the coalition only supports those elements that are under the direct command and control of the Iraqi security forces – and the Shi’ite PMF are not,” said Major General Gary Volesky, the commander of U.S.-led coalition ground forces in the fight against Islamic State.

“As far as what the Shi’ite PMF’s role is, again, that is up to the government of Iraq and we (advise) them on our recommendations,” Volesky said.

Tal Afar’s pre-war population of 150,0000 to 200,000 was a mix of Sunni and Shi’ite ethnic Turkmens until Shi’ites fled the town after Islamic State arrived.

U.S. President Barack Obama said on Tuesday it would be a difficult fight but Islamic State “will be defeated in Mosul”. He hopes to bolster his legacy by seizing back as much territory as he can from Islamic State before he leaves office in January.

A total of 20 villages were taken from the militants east, south and southeast of Mosul by early Tuesday, according to statements from the two forces.

Volesky did not give reporters in Washington a specific timeline of when he expected the Mosul operation to be complete, but said the momentum was with forces fighting against Islamic State. He said there were indications Islamic State leaders had left the city but did not give the number of leaders who had fled or the role they played in the Islamic State.

“A lot of the foreign fighters, we expect will stay because they’re not going to be able to exfiltrate as easily as some of the local fighters or the local leadership,” Volesky said.

Islamic State said on Monday its fighters had targeted the attacking forces with 10 suicide bombs and that their foes had surrounded five villages but not taken them. None of the reports could be independently verified.

In Washington, Pentagon spokesman Captain Jeff Davis told reporters on Tuesday that civilians in Mosul were being used as human shields.

Iraqi government forces are mostly fighting south of Mosul and were trying on Wednesday to clear the region of Shora, 40 km (25 miles) south of the city, a military statement said. Kurdish Peshmerga fighters were deployed on the eastern and northern frontlines, 20 to 25 km from the city.

“The PMF will be backing the security forces on the western front (..) along two axes,” a statement on the PMF website said. “The first is Tal Afar and the second is to support the forces going into the center of Mosul.”

Iraqi officials and residents of Mosul say Islamic State is preventing people from leaving the city but civilians are fleeing from outlying districts and villages.

The United Nations says that in a worst case scenario 1 million people could be displaced by the Mosul campaign, requiring emergency housing and food. It has warned that some 100,000 people may arrive in Syria from the Mosul area.

Still, most of the people from the area say they are waiting only for the fighting to end so that they can come home.

In Sheikh Ahmed, around the corner from the ruined house of Shi’ite villager Abbas Ahmad Hussein, a 47-year-old Sunni shepherd named Ali had also returned to check on his house.

It was relatively intact although some items had been stolen, Ali said.

“When I came to the edge of the village I didn’t want to come in,” he said. “I was shocked by the destruction. It made me sick.”

Asked if Shi’ites and Sunnis could live together in the village again the future, Ali said: “Inshallah” (God willing).

“I have more Shi’ite friends than Sunni friends,” Ali said. “Daesh is a threat to all humanity.”