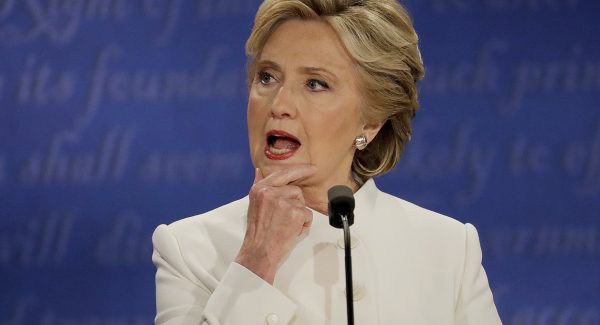 Hillary Clinton acted like a woman on the verge of clinching the presidency on the Las Vegas debate stage Wednesday night, swatting away Donald Trump as a mere nuisance, while the billionaire refused to say that he’ll accept the outcome of the election.

Clinton attacked Trump’s signature policy proposals — a border wall and mass deportations of undocumented immigrants — as ideas that are “not in keeping with who we are as a nation” and one, she said, that “would rip our country apart.”

And as the debate reached the one-hour mark, Clinton hammered Trump over the nine women who have come forward in the past week and accused him of sexual assault after he attempted to dismiss them as having been “debunked.”

“Donald thinks belittling women makes him bigger,” Clinton said. “He goes after their dignity, their self-worth, and I don’t think there is a woman anywhere that doesn’t know what that feels like. So we now know what Donald thinks and what he says and how he acts toward women. That’s who Donald is. I think it’s really up to all of us to demonstrate who we are and who our country is and to stand up and be very clear about what we expect from our next president.”

Although Trump, after preparing more intensely for this final showdown, attempted to put Clinton on the defensive several times and attacked the former secretary of state, especially over Clinton Foundation donations and past votes and statements of hers that he seemed better versed on, the Democratic nominee deftly parried the attacks.

And the Republican nominee, even after his daughter, running mate and campaign manager assured reporters Wednesday that Trump would accept the electoral result if he loses, demurred on that subject.

“I will look at it at the time,” said Trump, launching into a soliloquy about how the media has it in for him and how the overall election is rigged against his campaign.

“That’s horrifying,” Clinton shot back, offering several examples of Trump blaming his personal setbacks and disappointments on others’ cheating or rigging of the events, including The Apprentice getting passed over for an Emmy.

“Should have gotten it,” Trump blurted back.

After a relatively subdued and substantive opening segment on Supreme Court appointments, Clinton began trying to provoke a more animated response from the fiery GOP nominee, pointing to Trump’s failure to discuss his wall and his promise that Mexico would pay for it when he met two months ago with the country’s president.

“He didn’t even raise it,” Clinton said. “He choked. And then he got into a Twitter war.”

Trump responded calmly, stating that his meeting with the Mexican president was “very nice” and pivoted deftly to trade, blasting Clinton for her husband’s signing of NAFTA with the United States’ continental neighbors. He even asserted that Clinton, by supporting comprehensive immigration reform plans that included stronger border security measures, actually “fought for the wall in 2006 or thereabouts,” Trump said. “Now, she never gets anything done, so naturally the wall wasn’t built. But Hillary Clinton wanted the wall.”

But as Clinton chipped away, accusing Trump of using “undocumented immigrants to build Trump Tower,” her opponent’s calm demeanor gave way to the characteristic bombast and outburst that have characterized Trump’s first two debate performances and his entire campaign.

After moderator Chris Wallace asked Clinton about “open border” comments she made in a private speech revealed by WikiLeaks this month, she blasted Russia for attempting to influence the election and asked Trump to “admit and condemn the Russians are doing this.”

Trump labeled Clinton’s answer “a pivot” and asserted that Putin would respect him more than he currently does President Obama or a possible President Clinton.

“That’s because he’d rather have a puppet as president,” Clinton answered.

Even as he began to interrupt and interject more frequently, Trump landed at least one more focused message, attacking Clinton as a long-time Washington player who’s failed to deliver results.

“You do have experience,” Trump said after Clinton attacked his apparent hypocrisy for railing against trade deals despite having his own products made in Mexico and using foreign steel to build his hotels. “I say the one thing you have over me is experience. But it is bad experience because what you’ve done has turned out badly. For 30 years you’ve been in a position to help. If you say that I used steel or I used something else, make it impossible for me to do. That I wouldn’t mind. The problem is, you talk but you don’t get anything done, Hillary. You don’t.”

Clinton followed with a long compare and contrast.

“You know, back in the 1970s, I worked for the Children’s Defense Fund and I was taking on discrimination against African-American kids in schools,” Clinton said. “He was getting sued by the Justice Department for racial discrimination in his apartment buildings. In the 1980s, I was working to reform the schools in Arkansas. He was borrowing $14 million from his father to start his businesses. In the 1990s, I went to Beijing and I said women’s rights are human rights. He insulted a former Miss Universe, Alicia Machado, and called her an eating machine. And on the day when I was in the situation room monitoring the raid that brought Osama bin laden to justice, he was hosting ‘The Celebrity Apprentice.’ I’ll let the American people make that decision.”

Trump limped into the third and final presidential debate battered, bruised and enduring a public shellacking like nothing he’s experienced before.

It would have taken an almost unfathomable hot streak on the debate stage—or a major meltdown by Clinton, a notoriously over-prepared, risk-averse politician—for Trump to reverse the odds of him winning the White House given how sharply the race has swung toward the Democratic nominee over the last three weeks.

Clinton now has a 90 percent chance of winning the Nov. 8 election and becoming the country’s first woman president, according to political odds-makers.

Polls continue to show Trump now losing nearly every demographic group save for white men and the electoral map tipping toward a Clinton landslide, with new surveys showing that even reliably red states like Georgia and Arizona may be about to turn blue. Even a much improved performance in the second debate, when Trump put Clinton on the defensive, did little to slow Trump’s free-fall.

As his own efforts to psyche out his opponents have fallen flat, Trump himself has shown that he can be easily baited. On Tuesday, President Obama twice told reporters that Trump should “stop whining” about his unfounded claims of a rigged election, a comment that seemed intent on provoking a reaction from the thin-skinned candidate whose first real foray into politics was to question Obama’s U.S. citizenship.

After defying expectations and political gravity for 15 months, Trump’s collapse has happened fast—and it has been both shocking and predictable. Heading into the first debate last month, the race for the White House looked to be close to a toss-up. But Trump delivered an unfocused and at times incoherent performance, exacerbated in the days that followed as he walked into Clinton’s trap and continued to fat-shame a Latina former Miss Universe for gaining weight during her reign.

Things got worse heading into the second debate 10 days ago after a video emerged revealing Trump boasting about how his celebrity allowed him to get away with sexual assault on beautiful women—and his on-stage denial of such behavior during the last debate brought forth a steady stream of women with striking similar allegations that he in fact had groped them.

Trump has only been able to drag attention away from the scandal by relentlessly pursuing another narrative — that the election is rigged against him.