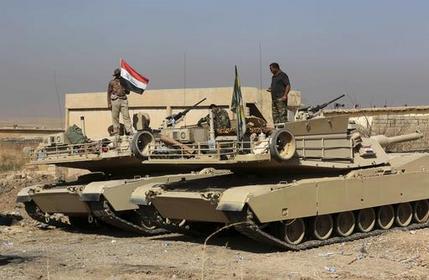 Iraqi and Kurdish commanders said Tuesday they paused their advance on Mosul, a day after the start of a massive operation to retake the Islamic State-held city, which is expected to take weeks, if not months.

The front lines to the east of Mosul were largely quiet, a day after Iraqi Kurdish forces advanced amid a barrage of U.S.-led airstrikes and heavy artillery.

“We are just holding our positions,” said Col. Khathar Sheikhan, of the Kurdish forces known as the peshmerga, which captured a handful of villages east of Mosul on Monday. “The Iraqi army will now advance past our arenas of control.”

“We have achieved our objectives,” he said.

But an Iraqi special forces commander said his troops have delayed an advance following a request from Kurdish forces for more time to achieve their goals. It was not immediately possible to reconcile the conflicting accounts.

Brig. Gen. Haider Fadhil said his men had planned to move at dawn, but postponed the operation. He said Iraqi army and Kurdish commanders would meet later Tuesday.

Iraqi Prime Minister Haider al-Abadi had announced the long-awaited offensive before dawn Monday, vowing to liberate the city from more than two years of extremist rule. Mosul is Iraq’s second largest city and the IS group’s last major urban bastion in the country. 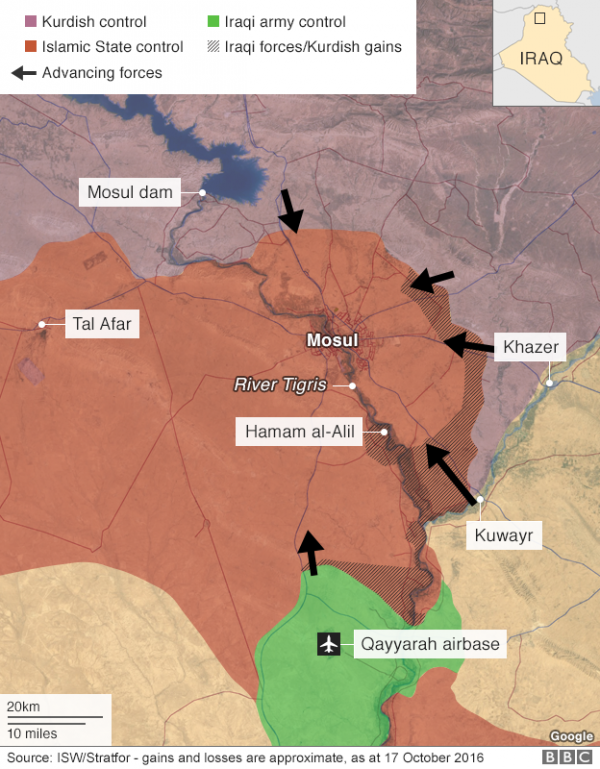 The large and complex battle for Mosul is expected to last weeks or months. It will involve more than 25,000 troops, including the Iraqi army, the Kurdish peshmerga, Sunni tribal fighters and Shiite militias. The U.S. military is providing air support and playing a supporting role on the ground.

A spokesman for the U.S.-led coalition said the operation was proceeding as planned and that Iraqi forces were making “excellent progress.”

“There’s no pause in efforts to liberate Mosul. Troops are on the move on various axes of advance toward the city,” said Col. John Dorrian. “Some commanders have reached their objectives ahead of schedule after encountering light-to-moderate resistance.”

The Iraqi Army’s 9th Division meanwhile reached the outskirts of the town of al-Hamdaniyah, south of Mosul, but stopped advancing because of snipers and suicide bombers, according to a military officer. The Federal Police reached al-Houd village to the east, another officer said. Both spoke on condition of anonymity as they were not authorized to brief the media.

By the end of the day Monday, Kurdish forces had retaken some 200 square kilometers (80 square miles), according to Massoud Barzani, the president of Iraq’s largely autonomous Kurdish region.

Peshmerga commanders on the ground estimated they retook nine villages and pushed the front line with IS back eight kilometers (five miles). The front line east of Mosul is now some 30 kilometers (20 miles) from the city.

IS said it carried out 12 suicide attacks on Monday against the forces advancing on Mosul, including eight that targeted the peshmerga. The report carried by the IS-run Aamaq news agency said Iraqi forces had captured just three villages and that IS fighters had halted an advance from the south.

In Baghdad, thousands of followers of an Iraqi Shiite cleric marched in front of the Turkish Embassy on Tuesday demanding the withdrawal of Turkish troops from a base near Mosul.

“Get out, Get out, occupier!” and “Yes, yes, for Iraq,” chanted the followers of Shiite cleric Moqtada al-Sadr.

Turkey says the troops are training Iraqi fighters to help retake Mosul, and that they are there with the permission of the Iraqi government. Baghdad denies it granted permission and has ordered the Turks to withdraw – a call Ankara has ignored.

The spat has raised concerns that the defeat of IS could lead to renewed conflict among the various fighting units currently allied against it.

Turkish Prime Minister Binali Yildirim said Tuesday that the fighters who were trained at the Bashiqa camp near Mosul were at the forefront of the Mosul operation, fighting alongside Kurdish forces.

Also, the Turkish air force was involved in airstrikes alongside the U.S.-backed coalition in the Mosul operation.

“Those who say Turkey has no business in Mosul have gotten their answer,” he said.