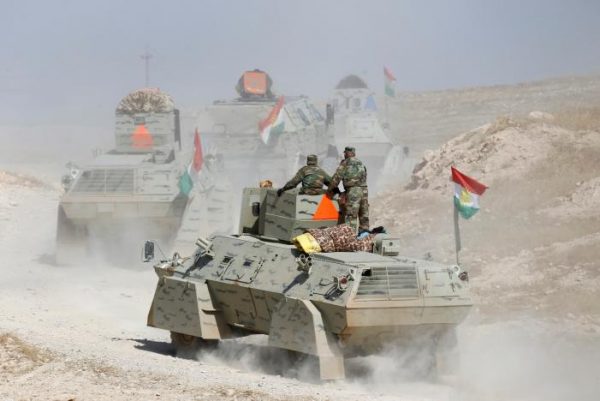 Iraqi and Kurdish forces closing in on Mosul said on Tuesday they had secured some 20 villages on the outskirts of the city in the first day of an operation to retake what is Islamic State’s last major stronghold in Iraq.

With around 1.5 million people still living in Mosul, the International Organisation for Migration said it was preparing gas masks in case of chemical attack by the jihadists, who had used such weapons previously against Iraqi Kurdish forces.

Tens of thousands of civilians could be forcibly expelled, trapped between fighting lines or used as human shields, said the IOM, one of many aid organizations to sound the alarm.

The fall of Mosul would signal the defeat of the ultra-hardline Sunni jihadists in Iraq but could also lead to land grabs and sectarian bloodletting between groups which fought one another after the 2003 overthrow of Saddam Hussein.

For U.S. President Barack Obama, the campaign is a calculated risk, with U.S. officials acknowledging that there is no clear plan for how the region around Mosul will be governed once Islamic State is expelled.

The Iraqi army and Peshmerga forces from autonomous Iraqi Kurdistan began moving toward the city at dawn on Monday under air cover from a U.S.-led coalition set up after Islamic State swept into Iraq from Syria in 2014.

Hoshiyar Zebari, a senior Kurdish official, said initial operations succeeded due to close cooperation between the Iraqi government and Kurdish peshmerga fighters, allowing them to clear Islamic State from 9 or 10 villages east of Mosul.

“Daesh is disoriented they don’t know whether to expect attacks from the east or west or north,” he told Reuters, using an Arabic acronym for the hardline Sunni group.

On Tuesday the attacking forces entered another phase, he said. “It won’t be a spectacular attack on Mosul itself. It will be very cautious. It is a high risk operation for everybody.”

Islamic State leader Abu Bakr al-Baghdadi, and explosives expert Fawzi Ali Nouimeh were both in the city, according to what he described as “solid” intelligence reports, indicating the group would put up significant resistance.

A total of 20 villages were taken from the militants east, south and southeast of Mosul by early Tuesday, according to statements from the two forces, fighting alongside one another for the first time.

Islamic State said on Monday its fighters had targeted the attacking forces with 10 suicide bombs and that their foes had surrounded five villages but not taken them. None of the reports could be independently verified. 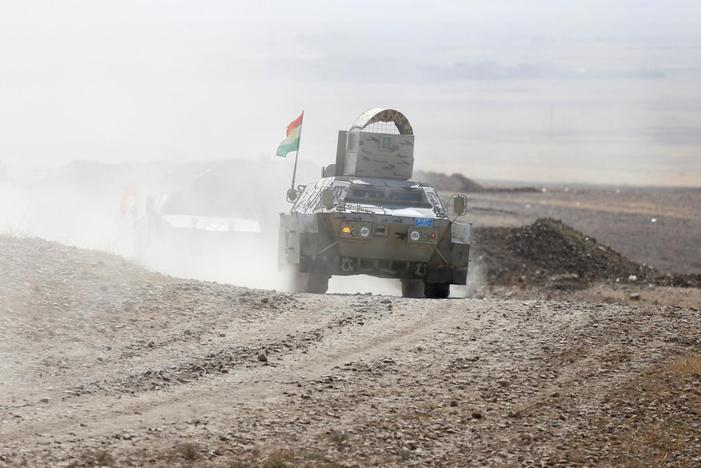 The advancing forces were still between 20 and 50 km (12-30 miles) from Mosul and officials described it as a “shaping operation” designed to enhance positions ahead of a major offensive by taking hilltops, crossings and important crossroads.

Iraqi Prime Minister Haider al-Abadi announced the offensive on Monday around two years after Iraq’s second-largest city fell to the militants, who exploited the civil war that broke out in Syria in 2011 to seize territory there.

The operation had been planned since July with U.S. and other coalition forces and Western and Iraqi officials, mindful of the civil war that followed Saddam’s fall, say plans for administering the mainly Sunni city and accommodating those who flee the fighting are in place.

The United Nations has said up to a million people could flee the city and that it expected the first wave in five or six days.

Fighting is expected to take weeks, if not months, as some 30,000 government forces, Sunni tribal fighters and Kurdish Peshmerga first encircle the city then attempt to oust between 4,000 and 8,000 Islamic State militants.

More than 5,000 U.S. soldiers are also deployed in support missions, as are troops from France, Britain, Canada and other Western nations.

The Iraqi army is attacking Mosul on the southern and southeastern fronts, while the Peshmerga carried out their operation to the east.

The Peshmerga, who are also deployed north and northwest of the city, said they secured “a significant stretch” of the 80 km (50 mile) road between Erbil, their capital, and Mosul, about an hour’s drive to the west.

Obama is seeking to put an end to the “caliphate” – a launch pad for attacks on civilians in the West – before he leaves office in January and the Mosul campaign comes three weeks before the U.S. presidential election on Nov. 8.

Coalition warplanes attacked 17 Islamic State positions in support of the Peshmerga operation in the heavily mined area, the Kurdish statement said, adding that at least four car bombs were destroyed.

There was no indication about the number of military or civilian casualties in the Iraqi or Kurdish statements.

The Mosul plan calls for the governor of the city’s Nineveh province, Nawfal al-Agoub, to be restored and the city divided into sub-districts with local mayors for each. Agoub will govern along with a senior representative from Baghdad and from Erbil, capital of Iraq’s autonomous Kurdish region.

Screening procedures for civilians fleeing Mosul have been enhanced, in an effort to learn from the battle for Fallujah, in Anbar province. There, Sunni men and boys were held, tortured and in some cases killed by Shi’ite militia members, who had erected makeshift checkpoints.

The U.N. refugee agency said it had built five camps to house 45,000 people and plans to have an additional six in the coming weeks with a capacity for 120,000, that would still not be enough to cope if the exodus is as big as feared.

The rights group said the Shi’ite-led government in Baghdad would bear responsibility for the actions of the militias, known collectively as the Popular Mobilization Forces, which are officially considered to be part of the country’s armed forces.

U.S. and Iraqi officials are working to ensure displaced civilians take safe routes out of the city, and that checkpoints are overseen by provincial authorities and monitored by international non-government groups.