Assange’s Internet access at the Ecuadorean Embassy has been cut 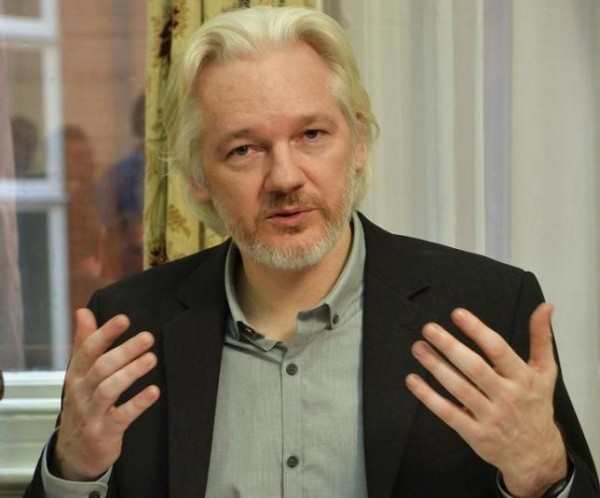 WikiLeaks says that founder Julian Assange’s Internet access has been cut by an unidentified state actor. Few other details were immediately available.

Assange has been up holed up at the Ecuadorean Embassy in London for more than four years after skipping bail to avoid being extradited over sex crimes allegations.

The cramped quarters haven’t prevented the Australian transparency activist from working and WikiLeaks continues to deliver scoops, including revelations that have rattled Hillary Clinton’s campaign for president as the U.S. election enters its final stretch.

Calls, texts and emails left with WikiLeaks weren’t immediately returned Monday. A woman who picked up the phone at the embassy said: “I cannot disclose any information.”

Ecuador’s Foreign Ministry released a brief statement that didn’t mention the Internet cut off, but reaffirmed its decision to grant Assange asylum.

“Faced with the speculation of the last few hours, the Government of Ecuador ratifies the validity of the asylum granted to Julian Assange four years ago,” the Foreign Ministry said. “We reaffirm that his protection by the Ecuadorean state will continue while the circumstances that led to the granting of asylum remain.”

With both WikiLeaks and Ecuadorean officials refusing to say much more about the incident, outsiders were left to guess at what was happening behind closed doors at the embassy suite at No. 3 Hans Crescent, a stucco-fronted building which Assange has called home for more than four years. Had Ecuadorean diplomats lost patience with their famous Australian houseguest? Had they finally bowed to pressure from Washington to muzzle the outspoken ex-hacker following one revelation too many? Had there been some other kind of confrontation?

WikiLeaks said unspecified “contingency plans” were in place and its Twitter account was still active Tuesday. On Monday it released the latest tranche of emails from senior Clinton ally John Podesta, suggesting that, for now at least, the group’s ability to publish has not been compromised. The disclosure was the 10th installation in a series of leaks which have captured the workings of Clinton’s inner circle and included excerpts of her well-compensated speeches to investment bank Goldman Sachs.

WikiLeaks staffers Kristinn Hrafnsson and Sarah Harrison did not return repeated messages seeking comment. A woman who answered the phone at the embassy said she was not authorized to say anything. Ecuador’s Foreign Minister Guillaume Long, approached by The Associated Press on the sidelines of a United Nations conference in Quito on Monday, declined to comment when asked about Assange. His office later released a terse statementin response to “the speculation of the last few hours” reaffirming Assange’s asylum status and saying that “his protection by the Ecuadorean state will continue while the circumstances that led to the granting of asylum remain.”

The statement made no mention of Assange’s internet access.

Assange fled to the Ecuadorean Embassy on June 19, 2012, after a drawn-out and ultimately unsuccessful legal battle to avoid extradition to Sweden, where he remains wanted over an allegation of rape. British authorities have made clear they would arrest him if he tried to leave, and London’s Metropolitan Police used to maintain a visible presence outside the building.

Assange has carved out a life at Hans Crescent, dining on delivered food, welcoming famous well-wishers and even occasionally addressing the media the embassy’s balcony. But evidence of tension and mutual suspicion with his hosts surfaced after BuzzFeed News drew on confidential Ecuadorean government documents to detail a violent, after-hours confrontation between Assange and an Ecuadorean security guard in September 2012.

The documents also carried a warning that Assange’s “evident anger” and “feelings of superiority” could cause stress to those around him – “especially the personnel who work in the embassy, mainly women.”