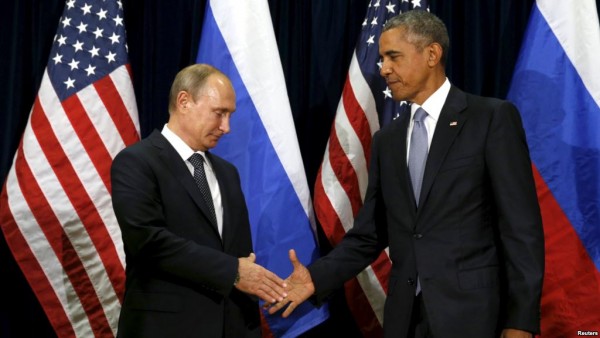 The Syrian ceasefire has disintegrated. At best it survived 48 hours. In reality it was still born. Washington has now officially suspended further talks with Moscow over reestablishing a Syrian ceasefire. Secretary of State John Kerry has called for an investigation of Syrian and Russian war crimes. The UN Security Council is expected to take up a resolution in the next few days calling for a new ceasefire, but given Russia’s veto on the Security Council, the deliberations will go nowhere. Perhaps it’s time for John Kerry to pull out his really big guns—yes, send Taylor Swift to do a concert at the Kremlin.

The Russians tried to blame the collapse of the ceasefire on the White House’s inability to identify and segregate so called “moderate” Syrian rebel forces from the radical jihadist Jabhat Fateh al-Sham (formerly the al-Nusra Front). It was a hopeless task, one that was impossible to achieve given the fluidity in the composition of the various Syrian rebel and jihadist groups as well as the ever shifting battlefield alliances.

The fact that the U.S. even consented to somehow take on this responsibility only underscores how completely inept the Kerry led State Department has been in conducting negotiations with the Russians. As noted intelligence analyst John R. Schindler of the XX Committee (who largely inspired this particular column) put it, to the KGB schooled “hard men” of the Kremlin, dealing with the Obama administration is akin to taking candy from a baby.

East Aleppo’s largest underground hospital, referred to as M10, was hit three times in the last week and according to eyewitnesses was completely destroyed. Similarly, though less extensive attacks have been carried out against Hama and other rebel controlled areas, Syrian forces have also been specifically targeting the “White Helmets,” the Syrian rescue organization credited with saving countless victims trapped in the rubble of bombed buildings.

The mounting death toll in east Aleppo is staggering. The city, whose population still numbers between 250,000 and 300,000 people, is now surrounded by forces loyal to Syrian President Bashar al-Assad. According to UN observers the city is desperately short of food and medicine. In the meantime, Russian air forces drop bombs with abandon. The Kremlin demonstrated a long time ago, in Afghanistan, in Chechnya and everywhere else that has experienced the Russian jack boot, that containing collateral damage to civilian areas is simply not a very large priority—if even one at all.

To add insult to injury, on October 3, the Russian Foreign Ministry announced that any attempts by the United States to attack Syrian troops would be met by instant reprisals and would lead to “total war,” and would produce “tectonic shifts” throughout the Middle East.

There is little chance that the U.S. would attack Syrian ground forces at this time knowing that it could lead to an armed confrontation with Russia. Lame duck presidents do not provoke international showdowns with a nuclear armed opponent in the waning weeks of their presidency. For the Kremlin, knowing that the challenge will go unanswered, the warning is an easy opportunity to make propaganda points at the expense of the White House.

Not that this administration ever showed much backbone in standing up to Putin and his gang, but in the waning days of its presidency the Obama administration has become even more feckless and irresolute. Putin has effectively thrown Obama out of Syria. At best they have relegated the U.S. to a minor role. Not since the ignominious retreat from Saigon has the United States been so humiliated by what is otherwise a second rate power.

In the meantime, the Kremlin keeps expanding its provocations of the U.S. and NATO forces. Russian overflights over the Baltic Republics are now a common feature, and have escalated from incursion of unarmed planes to overflights of fully armed combat aircraft operating with their transponders turned off. Russia has also announced that it is reactivating long range bomber squadrons over the western Pacific. With a range as far east as Hawaii, these aircraft are a direct threat to American naval assets in the central and western Pacific.

In addition, the Kremlin has also indicated that it is again seeking foreign bases in Cuba and Vietnam and has already activated an intelligence gathering facility just outside of Havana.

In perhaps its most provocative move to date, Russia has announced that it will be deploying the Iskander-M (SS-26) missile system in the Russian enclave of Kaliningrad. These missiles, the latest generation of the original Scud missile system, have a range of about 300 miles and can carry both conventional and nuclear warheads. Make no mistake, this is an offensive weapons system that is designed to pose a threat and to intimidate a large area of eastern Europe and Scandinavia.

The unwillingness of the Obama administration to even acknowledge, much less deal with the fact that the United States and Russia are in a new Cold War is inexplicable. Cold War 2.0 will not be a rehash of the first Cold War. It will be fought in cyberspace and social media just as much as it will be fought in the shadows and the inevitable proxy wars that lie ahead.

The complete collapse of Obama’s Syrian policy is symptomatic of the one enduring and unmistakable legacy of the incoherence of his administration’s foreign policy—a world that is far more dangerous, chaotic and disordered than the one that existed in 2008.

Oh, and one more thing Mr. President. If you happen to run across that Nobel Peace Prize you received while you are packing away your personal effects, you might give some thought to sending it back. If there is one thing that eight years of Obama foreign policy have demonstrated, it is that it was wholly undeserved.