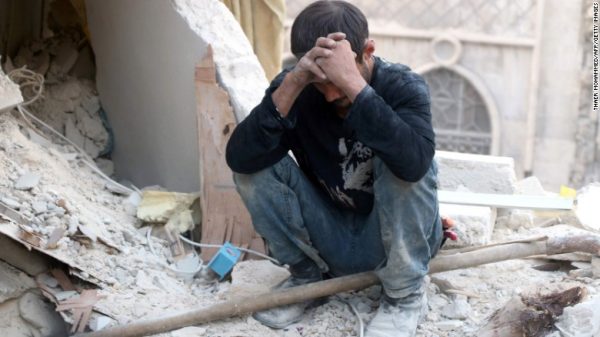 A Syrian man sits on the rubble of destroyed buildings after a government forces airstrike in Aleppo on October 4, 2016.
Share:

UNITED NATIONS –  Rival resolutions on Syria backed by the West and Russia were defeated in the U.N. Security Council on Saturday, offering no relief to the besieged city of Aleppo and leaving the key powers even more divided over a course of action in the war-ravaged country.

Russia vetoed a French-drafted resolution demanding an immediate halt to the bombing campaign that the Syrian government and Russia are carrying out against rebel-held districts in Aleppo. The rival Russian draft which made no mention of a bombing halt was rejected because it failed to get the minimum nine “yes” votes needed for approval by the 15-member council.

Russia’s U.N. Ambassador Vitaly Churkin, the current rotating council president, said before the votes that members were engaging in “one of the strangest spectacles” in the Security Council, because they were meeting knowing that neither resolution would be adopted.

“This waste of time is inadmissible,” he said.

The votes reflected the deep divisions in the U.N.’s most powerful body which is charged with ensuring international peace and security but has totally failed to take action to end the more than 5-year Syrian conflict which has killed over 300,000 people and displaced millions.

It was the fifth veto by Russia of a Western-backed resolution aimed at ending the Syrian conflict.

When Syria’s U.N. Ambassador Bashar Ja’afari started speaking after the votes, a number of ambassadors walked out, including the representatives of Britain, France, Ukraine and the United States.

French Foreign Minister Jean-Marc Ayrault, who addressed the session before the vote on the French resolution, warned that the continued bombing of Aleppo was killing civilians and destroying hospitals and schools — “and has nothing to do with combatting terrorism,” as Syrian President Bashar Assad’s government and its close ally Russia contend.

“It is the annihilation of Aleppo,” he said, declaring that the continued bombing will leave the city in ruins, a place where citizens will be left to their “executioners.”

He compared Aleppo’s likely fate to Guernica during the Spanish Civil War in the 1930s, Srebrenica during the Bosnian war and the Chechen capital Grozny which was pummeled by the Russian army in the mid-1990s.

Russia’s Churkin said the demand for a bombing halt in Aleppo was “not fleshed out” and would affect the government-controlled western part of the city as well as the rebel-held east.

He said the French resolution’s adoption would have been the first where the Security Council decided on a course of action for a permanent council member without prior agreement — meaning that Russia would have been required to stop all flights and bombing of Aleppo.

Churkin noted that activity in Aleppo had gone down on Friday and “we hope this is a trend that will continue.”

Until Friday afternoon, the French resolution was the only one before the council. But Russia unexpectedly introduced a rival resolution in a bid take some attention off its expected veto.

After the council rejected the Russian draft, Britain’s U.N. Ambassador Matthew Rycroft addressed Churkin directly saying: “A lonely veto and then just four votes in favor of your text — a double humiliation.”

“This text was a cynical attempt to divert attention from your veto today that once again denied any hope to the people of Aleppo,” Rycroft said. “It’s a sham, just as Russia’s hollow commitment to a political process in Syria is a sham.”

U.S. deputy ambassador David Pressman followed up saying Russia and Syria will undoubtedly claim that any devastation in Aleppo that “they are raining down is directed at terrorists,” not at the civilian buildings they are clearly striking.

“What Russia wants is for there to be more talk while they seek to take the city by brutal force,” Pressman said. “What we want is less talk and more action for them to stop the slaughter.”

Russia’s Churkin said he wouldn’t react to the “provocative rhetoric” from the U.S. and Britain.

He agreed that “more action is needed,” but blamed the United States for failing to separate the moderate opposition from the extremists as called for in the failed U.S.-Russia cease-fire agreement.

Both the French and the Russian resolutions urged immediate implementation of that agreement and “immediate, safe and unhindered humanitarian access throughout Syria.”

Many council members expressed dismay at the council’s continued failure to end the suffering of the Syrian people.

“Instead of holding serious political consultations in its open and closed sessions to stop the Syrian bloodletting, consultations have amounted to no more than repetition of traditional positions and a dialogue of the deaf,” said Egypt’s U.N. Ambassador Amr Abdellatif Aboulatta, the Arab representative on the council.