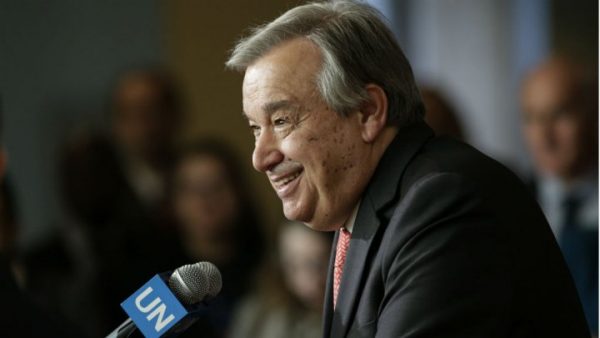 Portugal’s former prime minister Antonio Guterres was officially nominated by the UN Security Council on Thursday to be the next United Nations secretary-general. Guterres will take up the new post to succeed Ban Ki-moon in January 2017.

The 15-member council unanimously adopted a resolution formally presenting Guterres as their choice during a closed-door session.

The UN General Assembly’s 193 member-states are now expected to approve Guterres as Ban’s successor at a vote expected to take place next week.

Guterres is a self-described man of action who earned his stripes as the world body’s refugee chief, tirelessly pressing rich nations to do more.

An engineer by training and fervent Catholic, Guterres, 67, fought unflaggingly for migrants’ rights for over a decade as UN High Commissioner for Refugees from June 2005 to December 2015.

He repeatedly warned that millions of refugees fleeing conflicts in Syria, Iraq and Afghanistan would turn to Europe if nations like Turkey and Jordan did not receive more help to cope.

“When people say they cannot receive Syrian refugees because they are Muslims, those that say it are supporting terrorist organisations and allowing them to be much more effective in recruiting people,” he said in December just before he stepped down as UN refugee chief.

Guterres’ two terms at the helm of the UN agency were also marked by a reform of its internal structures which reduced the number of staff at its Geneva headquarters by a third.

The overhaul boosted the agency’s capacity to respond to international crisis by deploying more staff closer to hotspots.

Former Portuguese president Anibal Cavaco Silva said earlier this year that Guterres had “left a legacy” at the refugee agency “that means today he is a respected voice and all the world listens to him.”

Frequently also touted as a possible candidate for president of Portugal, the Socialist Guterres said he has declined to run because he would rather “play ball” than be “a referee”.

“I like action, being on the ground, I like things that force me to permanently intervene,” he added in an interview with Portuguese public television RTP in January.

Elected a lawmaker in 1976 in Portugal’s first democratic election following the revolution, Guterres, an engineer by training, quickly earned a reputation as a gifted orator.

In 1992 he became secretary general of the Socialist party, in opposition at the time.

Guterres, who comes across as approachable, led the party to victory in the next general election in 1995, becoming prime minister.

Portugal was undergoing rapid economic growth at the time and enjoying nearly full employment, which allowed Guterres to set up a guaranteed minimum income, one of his government’s flagship measures.

Staunchly pro-EU, Guterres made meeting the criteria for membership in the euro single currency area a priority and Portugal was among the 11 nations that adopted the common currency when it was launched in 1999.

Under his watch the Socialists were re-elected in 1999, again without an absolute majority in parliament.

His detractors blame him for contributing to the victory of the “no” side in a 1998 referendum on a proposal to liberalise Portugal’s strict law against abortion.

Guterres allowed the referendum but publicly opposed to the abortion law being changed.

When East Timor, a former Portuguese colony, erupted into violence in 1999 after the territory voted in a referendum in favour of independence from Indonesia, Guterres led diplomatic efforts to convince the United Nations to intervene to restore peace.

His stewardship of Portugal’s turn at the helm of the rotating presidency of the European Union during the first half of 2000 was considered a success.

Lisbon hosted the first EU-Africa summit and the European Commission adopted the so-called Lisbon Agenda which aimed to make the EU the “most dynamic and competitive knowledge-based economy” by 2010.

His popularity in Portugal, however, waned during this time as the economy slowed.

Guterres resigned after the Socialists took a drubbing in local election at the end of 2001, saying he wanted to prevent the country from falling into a “political swamp”.

He also abandoned Portuguese politics to focus on a diplomatic career abroad.

Guterres became a widower in 1998, and remarried three years later. He has two children by his first wife.