“Putin is a dictator… not a leader ” , Kaine tells Pence during VP debate 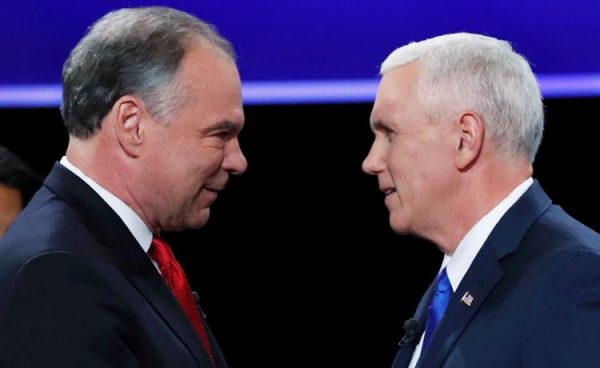 Democratic vice presidential candidate Tim Kaine Tuesday blamed Russian President Vladimir Putin for the failure of the “reset” by Hillary Clinton when she was secretary of state.

“Vladimir Putin is a dictator,” the Virginia senator said during the debate at Longwood University in Farmville, Va.

Kaine had been hammered by Clinton’s Russian policy by Republican candidate Mike Pence.

“Vladimir Putin is a dictator. He’s not a leader. Anybody who thinks otherwise doesn’t know Russian history or Vladimir Putin.

“Hillary Clinton knows exactly who this guy is. So how do you deal with him? We do have to deal with Russia in a lot of different ways. There are areas we can cooperate.”

Kaine noted that Clinton “worked with Russia on the new START treaty to reduce their nuclear weapons stockpile.”

He also noted that Clinton worked on the Iran nuclear deal — and “she knows how to sit down at a table and negotiate tough deals.”

Leading up to the Putin comments, Kaine attacked Pence for Donald Trump’s praise of the Russian leader and his call for other nations to have nuclear weapons.

“I would love to hear Gov. Pence tell me what’s so enjoyable or comical about nuclear war,” Kaine said.

“Did you work on that one a long time, because that had a lot of creative lines in it,” Pence retorted.

“I can make very clear to the American people … that America is less safe today than it was the day that Barack Obama became president of the United States,” he added in attacking Democratic polices.